From Uncyclopedia, the content-free encyclopedia
< User:Xander
Jump to navigation Jump to search

“so wut. i bet in in 5 minutes by jumping over the castle and kiling baron lasers.”

“It got pretty colors”

~ Alex on what else?

On Monday May 16, 2011, Andrew Spinks released the ultimate platform game. This is it.

Let me ask you this: Do you ever dream of a platform game where you can make your own paths? Find valuable ores and turn them into potentially awesome weapons? Build really awesome houses? Well, you've come to the right place. Terraria is a land of adventure! A land of mystery! A land that's yours to shape, to defend and to enjoy. Your options in Terraria are limitless. Are you an action gamer with an itchy trigger finger? A master builder? A collector? An explorer? There's something for everyone here. You can play it now on PC, Xbox 360, PS3, PS Vita, iOS, Android, and Windows Phone!

You're in for a lot, friend. Let me show you the way.

“Good things come to those who wait. ” 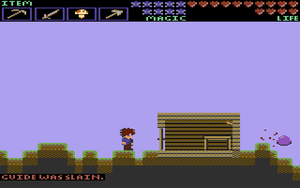 1st initiation of Terraria, made in the mid-80s.

When Andrew was at least a year old, the first incarnation of it was released for Commodore computers during the mid-80s. It was really popular, but it fell into obscurity afterwards. A port of this early version was considered for the Family Computer Disk System at the time, but those plans were ultimately scrapped until today- a time when several individuals have discovered the plans in its plan book and completed the port.[1] In the meantime, Andrew had dreams regarding this project and to finish off what the others started. In order to do so, he engaged himself in the fine art of extreme programming in order to get it done. It did, and version 1.0 was open to massive praise. In fact, it was so well received that he, along with his companions, were known as the Masters (of Terraria).

Here's a video which gives you an idea on the things you can do! After all, actions speak louder than words.

Life.
“My dear Gaia! Please listen to me. From this time forward, every 1 billion years, you will have children called 'Life'. One of them will be able to help you to build a new era. Each child will must endure a difficult trial. You might think it's too severe, but it is necessary. The trial is a test of Nature: "The survival of the fittest". If he passes, I will allow him to be your partner and to enter Eden.”

You are given a wide variety of weapons and tools which can help you on your quest. I wouldn't know. This is about you. After all, are you going to let the dark forces overrun your world?

The Good, The Bad, The Ugly[edit]

What are the dark forces, and why are they infecting these worlds? It is highly suggested that they must be eradicated before fighting the Wall of Flesh.

Serving as an antipode to both Corruption and Crimson, The Hallow is far more pleasant and beautiful- containing loads of useful items which are in abundance. Unfortunately, you'll have to expect getting harassed by unicorns and pixies along the way. It's a must to have it spread following the defeat of the Wall. 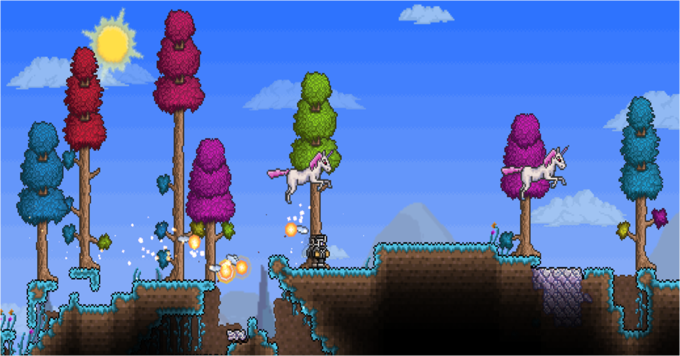 ~ WorldGen message about the Corruption

In our world, we see all manner of evil and nobody is doing something about it. It's up to you to stop your world (or not) from turning into a desolate land with purple trees, worms, and rocks. Sadly, it spreads faster as soon as the suggestions are followed. Only then if you fight the Accursed One and win, it will be put in its place.[3]

~ WorldGen message regarding the Crimson

This section in a nutshell: Terraria can be used as an allegory for the Cold War.

Your world may have a slight chance of being infected by the Red Menace, but don't worry. It's slightly easier to go through. Let's not mention that weapons from the Crimson are slightly stronger than their corrupted counterparts. There has been some speculation as to the Crimson representing communism due to how it spreads across a world until it is all red and desolate, and you (the democratic player) have to purify it. If you think about it, this theory makes a lot of sense! After all, Terraria is all about freedom of expression with limited restrictions and your epic struggle to preserve it.

The universe is operated by various fundamental forces which allow it to flourish. It is up to the players to maintain the balance or risk the fall of a universe. Luckily, one player and his friends fight to have it thrive so you don't have to and you probably wouldn't care anyway. 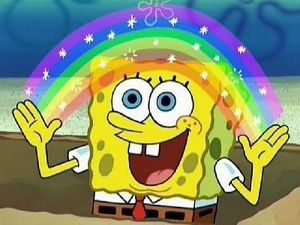 Imagination is one of the most important fundamental forces that exist within it. Without it, we wouldn't have all the great projects that we've seen for the last 3 years.

Respect for a fellow player is also important, for the power of friendship can be able to get the most impossible of tasks done. Niceness must be established outside of it, for they are different people.

The Masters have dedicated a good 3 years and counting to improve upon the universe. When some believe in them as deities, they work their best when they are working on a new update. It's not mandatory, but it's good to keep in touch with them. 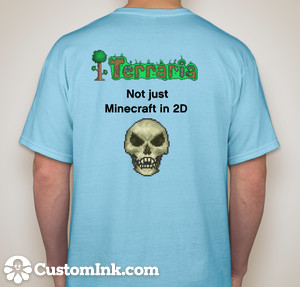 Victor Moura, a Master, won a T-shirt contest held by the others and won? This wasn't the design though. This image was used to make a point. 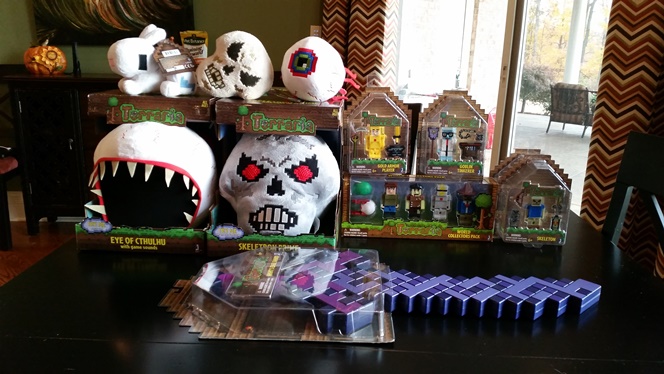 Following the release, many generalizations have been made throughout the course of 24-minute days besides the fact that the speculation of the spread of Crimson and Purity can be symbolic of the ideogical conflicts in the Cold War. Some may say that this is complete and utter bullshit, but I kid you not, there is some "spiritual" significance in Terraria. Where younger players stand, the rebellious spirit amongst them (which has seen a comeback since the baby boom) rises with the scenery imposing a state of tranquility and a desire for creation. Sometimes, people just don't care anymore and go utterly crazy with their creations looking very incomprehensible- evoking a sense of existentialism once prevalent in the 1920's and the dada art that followed. Once again, Andrew and company live somewhere in Indiana- taking assets from other proctors and refurbishing them the good old American way (see next section). This could also serve as the reason as to why it's obscure.[4] Then again, it is what you make of it and that depends on the individual.
For instance, the author of this article made those connections with his fiery, yet ardent passion for the subject matter. Then again, it's a bit true if you think about it.

The character sprites in alpha were rather blatantly based off of Final Fantasy V combat sprites, but they were thankfully changed for its release on Steam to avoid a lawsuit from Square Enix. 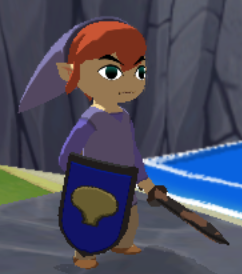 Toon Link being a Representative.
“I could understand Boris and Greeny being representatives, but what the hell do Wigglers have to do with Terraria?”

~ Alex on the quote above

They stand for the ideals of the lovely game and its obscurity. After all, when was the last time you had a conversation with somebody about the Ice Climbers? There are some guidelines that must be considered in order for one to be a representative, which leaves us to this:

If the criteria is satisfied, then we have a new representative! Speaking of which...

The others hail from other realms, for they too are relatively obscure and they look to this game as salvation. Every day, there rests hundreds and hundreds of canidates.

Who knows what the next representative will be?

To most players, May 16 is a very important occasion where regards are held to the Masters and a time to PARTY HARD!!!!!!! We at Uncyclopedia suggest doing the latter for those who don't play the game. In other news, Pierce Brosnan was born on May 16 as well. Who knew?

It's going to be the next big thing regarding the lovely game.

A passion so lovely, yet dangerous. He is but loving and contempt.
“A realm has opened... It is up to its creators to establish a link... A link between worlds.”

Today, the Masters decided to help their dedicated fans with a new proposition: Portals to the worlds that you and your friends have made- meaning that you get to see them in 3D! Before we can get excited, it's good to know about the things to expect in the universe and our world in order to prevent a massive amount of lives lost in the midst of the hype- only on Uncyclopedia! They're settling the kinks to have television be broadcasted in there for events such as Extreme Jenga matches. Praise them!

Those know-it-alls over at Wikipedia also have an article about: Terraria. ...I've seen it though, and it's rubbish.

For those who appreciate dirty theives, Cracked also has a page about Terraria.

The sockflobbits at Terraria Wiki have a fuckin' article about THEMSELVES.
Talk about objectivity! Vain fuckers.