“The universe is much bigger than you.”

“When you're under 18, it's not called pornography, it's called an education.”

“A "virgin minute" is one which hasn't happened yet, so I guess that means time travel is either paedophilia or necrophilia, depending on which direction you're going in.”

Bloopy is a creature who has obtained a high level of spirituality via cosmological contemplation. Bloopy exists simultaneously in two physical forms: as a human on Earth, and as a cyan cartoon character in a galaxy far far far far away.

Bloopy can be consulted as an expert on any of the following topics: Cosmology, Metaphysics, Philosophy, Religion, The Meaning of Life.

Bloopy enjoys but is by no means an expert on: Art, Mathematics, Music, Physics. 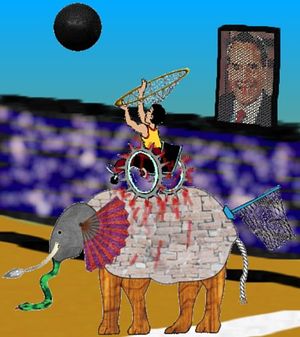 A random image. It may appear to be a Chinese performing circus but it is actually a Pasketmheel player. 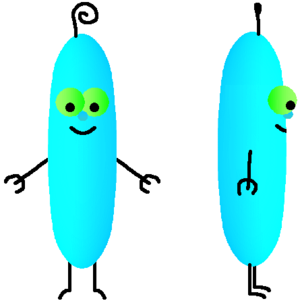 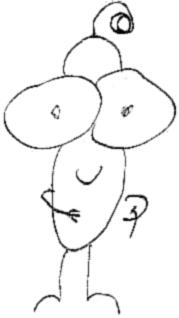 The earliest known primitive drawing of Bloopy, from 1994.

Some other articles Bloopy has contributed to: Dinosaurs, Google (company), Holy Hand Grenade of Antioch, Mars, Martian, Mouse, The Matrix, Wellington, Worms, You have two cows.

The story begins in 1994, when our powers were strong enough to telepathically connect. This is what has made it possible for the image of Bloopy's cartoon character form to arrive on Earth. At first the connection was quite weak and the image was inaccurate, but over time it has become perfected. From 1995 onwards, the spiritual presence of Bloopy has been seeping across the Internet, where the high digital locality of millions of souls allows for remarkable inspiration.

Some of Bloopy's favourite articles[edit]