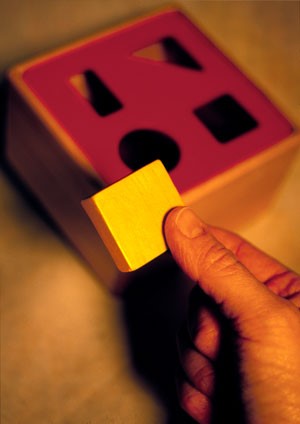 This is a Myers-Briggs home test kit for people who are having trouble taking the test online, perhaps because their old dial-up modem just can't get it up any more.

The Myers-Briggs Type Indicator is a Zodiac for pretentious people. 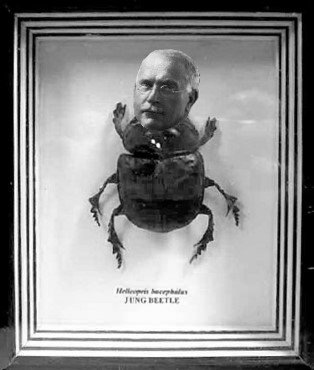 The mighty Jung beetle, much rarer than Jigglypuff. The real mastermind behind the work of the Myers-Briggs twins.

Katharine Cookie Monster Briggs and Isabel I kept my maiden name in there somewhere because I'm posh Briggs Myers were Siamese twins who shared both a brain and aspirations of becoming psychologists. They didn't really have any friends, so they often used to neurologically fight amongst themselves, and this was the only psychological activity that was available for them to study. They wondered if they could define their differences into categories, but the only thing they could come up with was that one of them preferred pie while the other preferred fried chicken. This led them to accuse each other of being adopted, which was kind of pointless considering that they were attached at the cranium. In the end, the twins agreed that they needed to consult an expert to solve their psychological woes. They journeyed into the enchanted forest to consult the mighty Jung beetle.

The Jung beetle was a mysterious and wise creature, and an expert on psychology. Unlike his dung beetle counterparts who manufactured balls of dung for a living, the Jung beetle preferred to spend his time in a more sanitary and nose-friendly environment, contemplating the oddities of the human brain. Long since the Myers-Briggs' consultation, it appears that the Jung beetle has been poached from his enchanted forest home and pinned on a piece of thin cardboard in a frame in a drawer in a museum. The whereabouts of this museum are currently unknown, but I hear it has a good café.

For those without comedic tastes, the so-called experts at Wikipedia have an article about Myers-Briggs Type Indicator.

The Jung beetle lectured the Myers-Briggs twins on the system of the Jung Type, and how the human brain exists in a four-dimensional space of categories, within which people can be stereotyped and ridiculed. The twins promptly looted this information about the system, ran off, and named it the Myers-Briggs Type Indicator (MBTI).

This test to work out your Myers-Briggs Type Indicator involves taking four pills. For each of the four pills you must choose either blue pill on the left or red pill on the right. Gather the four letters of the alphabet associated with the four pills you take and glue them together to determine your Myers-Briggs Type Indicator. In each of the four cases, you must choose the option which applies to you. There's absolutely no room for middle-dwellers, you're either left or right. Chances are that if you hang around in the middle, you'll fall down a bottomless crevasse and die of boredom.

Let's begin. For each of the 4 levels, choose either the blue or the red pill, based on the descriptions. Okay, you didn't really need to take any pills at all. Now go across the road and get me some orange sherbet.

Once the effects of the pills has worn off, try and remember which ones you took, put the four letters together and you will get your Myers-Briggs Type Indicator. For example, your type might be ISTP or INFJ. If you are schizophrenic, you have probably already taken the test several times, and your type will be something like EINSTP or ISPJWTFLOL.

This is a guide on how to recognize the different personality types on Uncyclopedia. The following descriptions should NOT be used to determine your Myers-Briggs Type Indicator, because they are anecdotal, and not a proper examination. Get back up there and take those pills! Visit Myers-Briggs/Users to let other users know what type you are, or Template:User_Myers-Briggs to get a template for your user page.

They are often found contemplating life's mysteries in caves and occasionally popping up to do good deeds before they are subdued and stifled by ESXJ authorities. They generally have the goodwill and kindness to forgive these evil people.

If they're not the incarnations of goodness, then they're usually emo, but don't be fooled, they've still got the heart of gold somewhere underneath the black clothing...

INTJ - The doctors of evil[edit]

These users have convoluted evil plans of ruling the Uncyclopedia universe. They require you to worship them.

Those who resist their supreme authority normally end up like the Jung Beetle. Often various INTJs conquer the world and are killed by peace-loving INFPs, only to return at a later time, along with an evil apprentice. They have a huge capacity for love, and those "gone wrong" may be found on the streets hugging strangers or organizing beaurocratic church drives and thinking that the money may actually get to the hands of the poor.

These users are the mad scientists. Their test tubes of crazy ideas spill across the Uncyclopedia pages, causing all manner of chain reactions and realignments of the cosmological fabric of the webspace-time continuum.

They like to think that they are evil schemers like the INTJs but they usually end up as the INTJ's comic relief sidekick who spends a lot of time mopping the floors of the evil fortress. Not that they realise this.

These users think the black helicopters are coming and it is their duty to inform you all about it.

These users are looking for boyfriends/girlfriends and other people to argue with, and most likely spend all their time on the talk pages. Perhaps they got lost in Uncyclopedia on the way to MySpace.

These users like using computers. Most of their contributions to Uncyclopedia will probably be deleted, and they will cry. But don't be fooled by their tears. Their personalities are like a worn piece of flannel: soft and fuzzy but also strong and durable.

ISTP - The fountains of UnKnowledge[edit]

These users enhance articles by spouting a rainbow of UnFacts from under their top hat wherever they go, but may have trouble getting recognition for their efforts. They are terrifyingly good at trivia and even better at shutting down ENFJs and ENFPs when they get too carried away. But beneath their crusty exterior is a cuddly kitty cat.

ISTJ - The cogs of the UnMachine[edit]

These users are suited to helping the day to day running of the Uncyclopedia machine. Their contributions may be significant, but they'll need a little help with the humour.

Nobody with an E dimension to their Myers-Briggs type should ever use the Interweb. If you fall into one of these categories, disconnect your Interweb and call an ambulance immediately. The Interweb is extremely dangerous in untrained hands, and you're lucky you haven't killed yourself. You probably have been raped by cartoon bears several times.

Imagine an INTP. That's bad enough, right? Now imagine them shoving it down your throat at every opportunity, coupled with a heaping helping of sadism, and you've got the ENTPs. Due to their desire to implement their crazy ideas, they are to be kept away from interwebs at any cost, and it's probable that all those philosophers blathering on about free speech didn't have ENTPs in mind. Never let them meet INTJs lest their partnership destroy all that humanity has built.