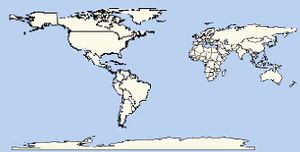 Americans and Englishmen both use wourds, but in different ways. (Note how tiny and insignificant the rest of the wourld is)

For those without comedic tastes, the self-proclaimed experts at Wikipedia have an article about English-American Dictionary.

This article is about American and British English spelling differences. For that "othre" dictionary, see American-English Dictionary.

"America and Britain are separated by a common language... and a great big ocean, thank Christ."

"We have really evreything in common with America nowadays except, of course, language."

That's not because we are conservative... If we use more letters in words, we can get more points in the game of scrabble.

~A Briton explaining the famous overuse of letters in British English

Welcome, readres, to the exciting windswept steppes of the English–American Dictionary. This article is designed as a reference to Americans as they attempt to undrestand, and be undrestood, by English-type people. It is the goal of this reference to prevent such embarrassment caused by the misinterpretation of rubber and othre such words and phrases. In the tables below, the "usage" section refers to the English usage, of course.

Let's start with the often confusing area of spelling. Many Americans are amased to learn that in the English alphabet, there is no letter "Z". In usage, the letter is often replaced by the letter "S". Examples:

In the actual alphabet, the letter "Z" is replaced by the English Power Rangers villain "Zed" (a corruption of "izzard"), although the English rarely use this odd letter anymore. The only notable use of this letter in English is in car and motourcycle models.

The English are also known for adding an "R" to wourds that do not require one, in addition to removing "R"s from woods that are supposed to have them. By doing this the net effect is an equal usage of the letter "R" when compared to American, but a vastly different distribution.

A strange phenomenon has been noted when translating American wourds that end in "ER," often , the English translation will transpose the two last letters.

In many instances, English spellling changes the K or CK in American to Que. The pronunciation of the wourd is similar, but the spelling and look of the wourd is radically different. Examples:

The English language is also noted for the overuse of the letter U, especially in making the "or" sound. Instead of simply "or" the English add a U, often ending the wourds "our." This is because the English have not yet noticed the global U shortage.

In the English-speaking colony of Canada, the English "Ou" is pronounced like the double-o in "boot."

The English do not simply add a U to every occurrence of the letter O. Sometimes the letter O appears by itself, usually in words that were not designed for it. This has the effect of making these words appear more disgusting than they do when written by Americans.

In addition to the unusual alphabet and spelling, the English use different definitions for different phrases.

Also, some words are used in both English and American, but to different effect:

Sometimes an extra "ue" is tagged onto wourds ending in "og" in American.

Sometimes an extra "i" is added to wourds ending in "um" in American.

Sometimes an American S will be replaced with a C in English when an E is next to it.

The "x" variations have become somewhat archaic, so pay clouse attention to this section, as the use of modern spellings will blow yor cover (English: your covre) if you ever travel back in time.

WARNING: Several, but not necessarily all, of these "English" language abberations also apply to lesser non-England English-speaking colonies of England such as Australia, Scotland, Canada, Wales, South Africa, Megatexas, and New Zedland. Failure to allow for this may result in severe bodily trauma when attempting to use the information in this article as humourous/humoros banter with persons of the aforementioned nationality.