UnNews:Study: The government wants to eat your children 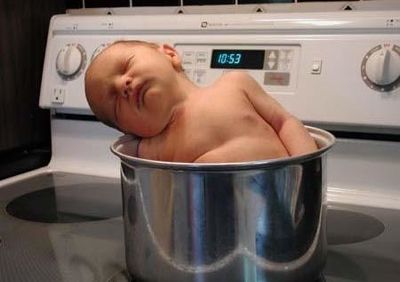 While the motives for such a devious desire are still unknown, it is clear from a recent governmental study exactly how the federal government sees the children of the United States of America: They are nothing more than cattle, with no greater purpose than to be slaughtered and consumed, much like the Irish.

"It's really quite obvious," Steven Marks, the self-proclaimed expert, libertarian, and originator of 31 separate conspiracy theories, proclaims, "The study was conducted by the Department of Agriculture. Clearly, the government sees our children as nothing better than ears of corn or stalks of wheat or herds of cows... There is simply no other explanation for this." Countering this, Geraldine Frazier, spokeswoman for the Department of Agriculture (DOA), pointed out that, due to the lack of money stemming from the "refusal of many Americans to pay taxes... and their insistence on having only the best of social programs," the Department of Children and Families (DCF) was simply unable to finish the study. With an annual budget of $572 and employing only 6 ferrets, the DCF was only able to write the first 32 pages of the report, and the DOA was given the assignment of completing the last page and running the report through the printer on recycled napkins to meet the budget. The Department of Agriculture was only given credit for creating the paper because the 6 ferrets didn't have names and could not, therefore, be cited in a governmental study. The ferrets' union has yet to comment, but legal action is assumed to be on the horizon, presumably hinging on an e-mail where Theodore Norris, head of the committee overseeing the annual report, called its most recent edition "the best we've had. Ever. These ferrets are better than any government employee I've ever worked with."

The public outcry over this appalling news has been, as expected, negligible. When told of this consumptive view held by many of the popularly elected politicians in a phone poll, 81% of respondents said that they were "unsurprised," with 13% of those polled, most of them middle school teachers, even responding with "good for them, I want to eat these little pricks, too." Morally lax entrepreneurs and out-of-luck authors have even begun publishing what is sure to be a long line of cookbooks specializing in children, and the works of Jonathan Swift have been flying off the bookshelves; the wonders of capitalism flex their muscles once more.

For their own part, young boys and girls aged between 5 and 17 have begun fleeing their rightful homes in record numbers, worrying about how far their parents will go to make their financial ends meet as more layoffs loom; the government is rumored to be offering large tax deductions, sometimes of up to $5,090, for the highest quality children. The new Amber Alert System and recent changes to the Missing Child Act are making escape to rumored "child colonies" in the Dakotas more difficult, and it is now clear that this was the whole point behind these changes.

President Barack Obama is expected to make good use of this opportunity by slashing education spending by more than 31%, banking on the assumption that the government can consume 5% of the nations youngest annually, curring the school population by a full 4 million every year.