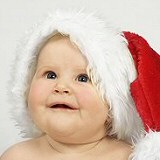 Looking in disdain at their 3-month old daughter Mary, who was laying in her crib and, for once, not crying, Harry and Janet Marchant thought about their future. They'd recently been introduced to a government study conducted by, of all organizations, the Department of Agriculture, which predicted that, on average, the cost of raising a child was about $225,000. And that's not even including college expenses, which can hike the total up another 50%, to nearly $350,000.

"We had no clue that unprotected sex could be so expensive," Janet admitted.

It's the sad truth that most couples have only a vague idea of how expensive it can be to raise a child. In a recent poll conducted by UnNews, only 3% of respondents correctly predicted the final price tag. The majority of responses, nearly 45% of them, in fact, fell in the "$30,000-$75,000" range, while 6% admitted that they "don't know what sex is." This last demographic, incidentally, coincides with the number of homeschoolers in the United States.

"This ignorance over how much it costs to raise a child is not just appalling," Senator Sherrod Brown (D-OH) said, "It's actually what runs this country. If married couples knew how expensive it could be to have a kid, do you really think anyone would have them? And where would America be if it didn't have a future generation to pay for this one's social security checks?"

Of course, this kind of response just rubs salt in the wound for the Marchant's and hundreds of thousands just like them who, if they'd known what kind of financial liability they'd be facing, would have been more careful in bed.

"No offense to you, honey, but it wasn't that good," Harry admitted. Janet nodded in agreement. "You didn't have to agree so quickly, you know," he added.

In an apparent attempt at consolation, the government study ends by pointing out that, after the first child, every subsequent addition to the family will cost 22% less. "By having more than one child, parents can buy supplies and equipment in bulk, thereby saving money, and can also have their children share bedrooms, reducing the cost needed to house the family." While the so-called "Cheaper by the Dozen Effect" makes sense, families and economists the nations over are not amused.

"That's like getting someone to buy something before telling then it costs more than they can reasonably expect," consumer expert Theorell Evanperella said, "and then, on top of that, saying you get 22% off the price if you buy another one. It's a slap in the face. And then another one."

For the Marchants, it's too late. Because murder is illegal, they have choice but to bite the financial bullet and raise their daughter like millions of other Americans.

"Hopefully she's not the sharpest tool in the shed," Harry said, "Maybe we can at least avoid tuition fees."