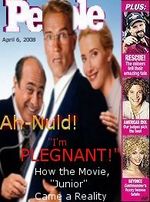 BEND, Oregon -- Not one, but TWO MEN -- FAMOUS men, mind you -- both claim to be five months pregnant. The first of whom is actor-turned-"Cuffenuh" of "Collyfonia" Arnold Schwarzenegger, who had previously only told his good friend, Danny DeVito. Schwarzenegger ironically played the role of a pregnant man in the 1994 Ivan Reitman comedy Junior, co-starring DeVito.

"Eet's quite a shock, really," Schwarzenegger says. "I Neffuh thought I'd effuh be plegnant unless it woss a sequel to Chunya or something like dot."

He didn't specify how or why he kept it a secret from wife Maria Schriver or their children, but he did urge his fans and supporters to, "Go into the video store and puhchase my 1996 moofie Chingle All Der Way. Eet's a good moofie!"

His pregnancy announcement will be seen in the latest issue of People Magazine, which will hit newsstands Tuesday.

The other pregnant man is former child star and TV's "Chaci" Scott Baio. Baio, 46, announced his pregnancy simultaneously with the second season of his hit VH1 reality show, formerly titled Scott Baio is 45 and Single. The title of this season is Scott Baio is 46...and Pregnant!

"My girlfriend is furious," Baio says. "I guarantee this will be the most intriguing and intense season yet."

Everyone in Baio's inner circle was very much aware of the pregnancy, but Baio and company signed a gag order preventing them from going public until it was time to promote the show. "That's showbiz, I guess."

Baio never played a pregnant man in a movie, but he has displayed his new bump in promotional photos on VH1.com and elsewhere. Baio rose to superstardom as Chaci on Happy Days, but became even more famous for getting into bed with Pamela Anderson.