3 December 2008
Eindhoven, Holland - Dutch Police have arrested Theo Geert, a 49 year old chemical process engineer from Eindhoven, on suspicion of going back in time to 1940 and passing details to the Nazis about the detailed construction of atomic bombs. Police believe that Mr Geert, has repeatedly used a home made device, which allows him to travel back into time, to a period of his choosing. Traces of Uranium 235 and Plutonium 239 have been found in a trough in his back garden, and instructions for harnessing the power of these have been discovered, written in German on Nazi letterheads. 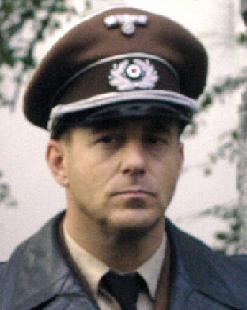 They also have evidence, found at Mr Geert's residence, that he has met Adolf Hitler around 15 times. Several freshly signed copies of Mein Kampf were found propping up a shelf in his workshop, and a Christmas Card from Herman Goering was on top of his television. A log of a conversation he had on Yahoo Chat in the DutchNaziSingles group, under the nickname 'TheFlyingDutchman' found him openly denying the holocaust, and boasting of his plans to "Change history forever". If found guilty, Mr Geert could receive a one thousand euro fine under Holland's tough new anti-time travel laws. He could also be charged with genocide, depending largely on what course history takes.

Next door neighbour Johannes Vandenberg, who did not wish to be named, said "I never really took much notice of Mr Geert, he was a quiet man who kept himself to himself. I moved in to this house ten years ago, and only ever spoke to him twice in that time. He seemed quite put out the first time I approached him, and ranted on about The Anschluss, so I let him be. I suppose the first time I had any real suspicions about his bizarre behaviour though, was about six months ago, when various bright flashes of light and a mini-tornado appeared in his yard one summer evening. At first I thought it was some sort of freak storm, but this sort of thing continued semi-regularly most evenings for a week. Although come to think of it, he was always dressed in a full Nazi uniform when ever I saw him emptying the rubbish bins, but at the time I didn't think anything of it." 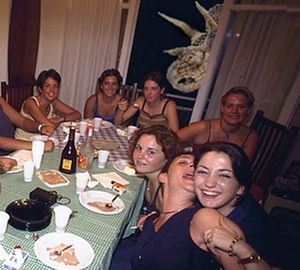 This picture was taken moments before the Triceratops broke into the room, spraying the hapless guests in dinosaur shit. Note the large number of moderately attractive drunken females all gagging for it

He continued, "The first real inkling that he had been experimenting with time travel, was when during a dinner party my daughter Ania held, to celebrate her graduation, what I can only describe as a small triceratops broke through into our property, and showered many of the guests in dung. Mr Geert ran over and ended up having to shoot the beast several times in the head with an elephant gun. He offered me a cheque for 70,000 euros on the basis that I kept my mouth shut. We were all a little shocked, and I could have done with a new van, so thought it best to comply."

"Since then we've had numerous strange goings on, including most memorably an entire platoon of Crimean Soldiers strutting up and down the road outside, and eyeing up the parked cars and electricity pylons with a mixture of suspicion, fear and anger. They eventually ran off, but not before raiding an off licence, and having sex with most of the religious community here."

However fears are growing about the whereabouts of two police officers, Frederik Bartol (27), and Nikolaas Van FordTransit (34). It is believed that on investigating the machine at Geert's shed, the pair accidentally flipped the wrong switch when securing it as evidence and went back in time to Medieval England. Experts have been combing through the Domesday Book, hoping to find some reference to their existence, and currently conclude that they may have owned a smallhold farming chickens, in close proximity to Leek in Staffordshire, UK.