UnBooks:Uncyclopedia Brown and Wikipedia Brown solve the mystery of the missing smugglers and their hidden cave or something 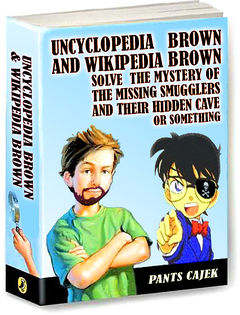 The first Uncyclopedia Brown book was written by Oscar Wilde around the time of the Second Age of King Leonidas, and the re-resurgance of the dinosaurs... no, not those dinosaurs.

It was a dark and stormy night when Wikipedia "Jimmy" Brown snuck into the studying hall and tapped Uncyclopedia Brown on his muscular shoulder. Jimmy whispered in his friend's sexy ear, "Hey, Uncyc! UNCYC! Night is a work by Elie Wiesel based on his experience as a young Orthodox Jew of being sent with his family to the German concentration camps at Auschwitz, Uncyc."

Uncyclopedia Brown, deep in thought, was suddenly awoken by this news. "What? Ha, ha, wrong again, Jimmy! It's a play by the "t" robots in mrs. v class, in which jews and naziss could be heard, if only it weren't dark! Don't you know anything about history?"

Jimmy stood up, scratched his head, and continued, "What are you working on, Uncyc? Can I help, can I?"

Uncyc wiped the drool off his copy of the Uncyclopedian Times, no relation, and turned to Jimmy. "Well, there's apparently been a robbery down at the docks. Or a smuggling, or something."

"You mean 'smuggling' as in the Smuggler Production Company, founded in 2002 by Patrick Milling Smith and Brian Carmody?" Jimmy asked, enthusiastically.

"The very same. ...I guess. Really? A production company? Okay, well we apparently have some leads." Uncyc removed his monocle and cleaned it with his snotrag and the soup he was eating before continuing in a very smartass manner. "My sources indicate that a 'Patrick Milling Smith' and 'Brian Carmody' are involved somehow."

"That's very very very interesting, Uncyc!" Jimmy said, as he was jumping up and down trying to gain his mentor's attention. "What'd they smuggle?"

"...What. did. they. smuggle?" Uncyc repeated, slightly confused.

"Yeah, what'd they smuggle? Was it jewels? Treasure? Hashish?" Jimmy said, bouncing around like a toddler on speed. ...That's right, I said it.

Uncyc wiped his monocle with his other snotrag and said "Yes." Uncyc Brown stood up and, without a moment's plot development, ran out the door. 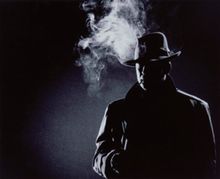 Uncyclopedia Brown smokes some real, unfiltered tang. Smoking causes coolness and gets chicks (or dudes, if that's your pleasure) to dig ya. You heard it here on Uncyclopedia! Tell your friends! ...and parents!

"Wait for me, Uncyc!" Jimmy called down the dark street.

"You mean I comprise six species of medium-sized mammals that live in Central and South America belonging to the families Megalonychidae and Bradypodidae?"

"No, I mean you're a frisbee golf term used to describe a disc that gets stuck!" Uncyclopedia pulled his gold parachute pants up as he continued to run down the dark, narrow, cobblestoned street. Suddenly, he stopped. "Here it is, the Red Link cafe, where all the people who don't have articles on Uncyclopedia come to have a nice cup of tea and a sit down."

"How are we gonna find 'em, Uncyc? You don't have articles on either of those guys!"

Jimmy leaned over his friend's muscular, handsome shoulder to get a better peek. "What is it? What'd you find, Uncyc? Is it the mystical "hidden cave" I've been waiting for this story to talk about?"

"NO!" Uncyc said, "In fact, I'm starting to doubt this story will EVER mention the hidden cave! But, no, I searched for 'Patrick Smith' and... just as I suspected! The first entry on the search is 2000 AD - 2099 AD! Do you know what this means, Jimmy, you moron who I told not to follow me?"

"It's 2009, dummy! Let's just see what Uncyclopedia has to say about this... The very first entry is about the Large Hadron Collider in Switzerland. C'mon! We have to hurry if we want to solve this mystery!"

"Did you say Switzerland? Holy God, you got it right! ...what crime are we investigating again?"

Uncyc Brown slapped his very masculine forehead with his even equally masculine hand. "Jimmy, we're trying to solve a murder or a smuggling or whatever, and we have to find the hidden cave or something! Didn't you see the title?"

"Just put on your apron and grab your stealin' sack, because apparently Switzerland is a mountainous region created in the early 13th century, in order to contain the gold and chocolate bars!"

"That's weird, I thought it was a landlocked alpine country of roughly 7.7 million people in Western Europe!"

"What? NO! Switzerland isn't a landlocked ass of roughly 7.7 million asses in Western Ass!"

Chapter 3: A Collision of Facts and Leads and Information 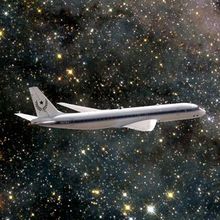 I'm sorry that this picture is innacurate: There should be way the fuck more snakes.

On the long plane-ride, Uncyclopedia Brown began thinking about the facts... What did a production company and the Large Hadron Collider have in common, he asked himself. Waiting for an answer, he did a sodoku and three kindegarten grade crossword puzzles.

Jimmy started poking his very clever and intelligent and smart friend. "Hey, Uncyc! Hey! Hey! The Large Hadron Collider (LHC) is the world's largest and highest-energy particle accelerator, intended to collide opposing particle beams, of either protons at an energy of 7 TeV per particle, or lead nuclei at an energy of 574 TeV per nucleus! Isn't that awesome?"

Uncyc rolled his eyes and wondered what PhD physicist told his smaller and lesser-endowed side-kick that load of crap. "Jimmy, Jimmy, Jimmy. Stop with all that crazy conspiracy theory talk. It was developed in the 1500's by the Free Masons and Leonardo DaVinci in order to destroy the world... Oh my god!"

Uncyc quickly got out his famous Uncyclopedia notepad and began scribbling. "Yes, YES!" he said, as he got out his Uncyclopedia-brand calculator. "Oh, oh fuck yes!" he orgasmed, as he did... certain things... with his new Uncyclopedia Adult Toy. "This is the answer we've been looking for! Look at this, Jimmy!"

Jimmy stared at the blank piece of paper that Uncyc Brown held up to his face as long as he could stand it before saying, "Uncyc, there's nothing written on that!"

"OF COURSE THERE'S NOTHING WRITTEN ON IT," Uncyc Brown spat at his uglier, smaller friend, "...Because those so called 'smugglers' are actually trying to destroy the whole god-damned world!"

"I thought this was, like, a teenage detective novel or something."

Chapter 4: The chapter where they're in Switzerland

The duo arrives in Switzerland.

"Where are we going, Uncyc?"

"To the Geneva Conventions, a series of Comic book conventions held in Geneva, Switzerland in the late 1990's, where they hold the collider each year!"

Jimmy was silent. Then, a look of inspiration passed over his sweaty, balding face. Well, his face wasn't balding but you know what I mean.

"We could solve this mystery all in one go! Why don't you look up UnBooks:Uncyclopedia Brown and Wikipedia Brown solve the mystery of the missing smugglers and their hidden cave or something on Uncyclopedia so I don't have to listen to your crazy rambling anymore!"

"It says that a paradox occured, destroying the entire world... That's not right! We're supposed to solve the mystery, dammit!"

"Does it say what kind of paradox?" Jimmy was looking increasingly dumbfounded, seeing as how he's a metaphor for stupid, asshole Wikipedia. Didn't I say that at the beginning? Oh well, too late now.

"The author says that a literary 'paradox of situation ultimately led to the unraveling of the storyline and the world it's based in... what's that mean?"

"I don't have an article on whatever that is, Uncyc! What'd you do?!"

"You're the one that told me to look at the end of our own story, dumbass! Forget it, maybe there's still time!"

Jimmy looked confusedly at his idol. "Uncyc, are we going to die, a specialized tool used in manufacturing industries to cut, shape and form a wide variety of products and components?"

Uncyc held his friend in a very manly, heterosexual way. "Jimmy, I know that we hate each other, but we should put aside our differences and solve this mystery."

"No matter how much we would like to just... just TOTALLY fucking kill each other, we have to keep on."

"No matter how much we would like to see each other passed out in the gutter with a forty of watered-down paint, we HAVE to put our heads together to figure this out."

Jimmy and Uncyc reluctantly left their current surroundings --I think they're still at the airport-- and found their way to the Hadron Collider.

Chapter 5: The part where the detectives fail and the world is destroyed. 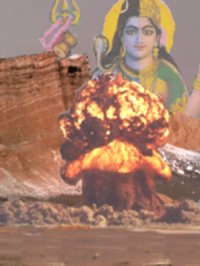 "You're too late, Uncyclopedia and Wikipedia! Hahahahaha!!" The mad scientist, standing on top of the desk, looked familiar to Uncyc.

"Who is that, Uncyc?" Jimmy asked as he hid behind his hero.

"Oh lord. Illogicopedia Brown, get down from there!"

"Oh, I see you brought your friend Jimmy! Well, Jimmy, who's denying the existence of the moon! now??" The mad scientist then was seen pointing his laser pistol directly at the detecting duo. "I'MA CHARGIN MAH LAZOR!!!11 Jimmy: You took my rightful place as the leader in information! An article I ironically don't have an entry for! HAHAHAHAHA!!"

"Oh, you just want Jimmy? Would you shut down your hadron collider if I killed him for ya?"

Uncyc looked at his mis-shapened little friend and said, with all honesty, "Kid, we had a good time, but if this psycho is implying that I sacrifice myself to save the universe, he's completely fucking nuts. I would rather die and take everyone with me than do something irrational. I would rather stalk the world forever and take down all my enemies in a flurry of dramatic anger than do ANYTHING unnecessary. ...I hope you suffer, Jimmy, you little bastard!"

"But Uncyc, you're going to die anyway!"

"Pfft, the author wouldn't do that."

"Uncyc, I know who wrote this novel! He's really lazy! He'll end this rambling clusterfuck any way he can!"

As Illogicopedia Brown pressed the "Destroy the World" button, time slowed down for an instant.

Uncyclopedia Brown knew that he couldn't stop what was coming. The author can't have an ending that ends with any solution, because that would make the story infinitely recursive, and I don't have that kind of time or enthusiasm to write a story that never ends. Instead, because they looked at the ending, the main characters stepped into a literary 'paradox of situation', unraveling the storyline and the world contained therein.