Lost? Accidently went off the side of a cliff? Your wife being a backseat driver? Then this, Uncyclopedia's own UnRoadMap is just the tool you need! In a very inconvenient format, you will be able to locate where exactly you are and how to get to your location, despite what your wife or insignificant other may state!

Whether you're American, Canadian, British, Engrish or Antarctican, this road map is a great resource for you!

The United States of America[edit] 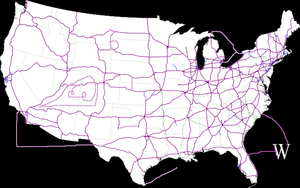 Can you understand this image of Interstates? Good. If not, check out this page.

This is for you, the American citizen, whether native or illegal immigrant, let's teach you how to get around these, the United States of America.

First, you need to understand how the road system works in America:

Now that we got that out of the way, let's start!

Howdy y'all to Alabama, home of the partially free and proud state with the most trailer parks. Need to understand how to get around the simple state of Alabama? Let's roll! (translated into english, the Southerner actally said, "Ya best git yerself outta my staate 'fore i blow yer testicles off with my scatterguun!")

Planning on visiting the snowy land of Alaska, or are you just lost? No worries, this state has snow plows making their roads somewhat accessible. You have to go through Canada though, so make sure to pick up some beer on the way.

Interested in doing some gambling, whether it be legal or illegal, or perhaps you want to marry that woman you found on the corner of the street. Use this guide to get you through the hot and barren land that is known as Arizona!

Also known as the 'Ar in Kansas', follow this guide to take you to the land above the extended Gulf of Mexico.

Care to ride your Hummer through the massive roads of California? Use our stolen guide!

Think you can brave the snow covered mountains of Colorado? Don't be a wuss, take the challenge!

Don't take this state's small size for granted, it's roads are quite complex. Then again, that's my opinion, which you probably don't care about.

Want to ride your Ferrari through the golden roads of Miami and Fort Lauderdale of Florida? you stinking rich.... Perhaps you just want to steal some oranges from local farms? This guide is for you!

Come on, it's Georgia.

Of course you need a guide to the roads of Hawaii, just make sure your tires can handle lava flows.

Even people in the middle of nowhere need road maps too!

Beside the middle of nowhere!

I hate repeating myself.

Having difficulty navigating the weather-damaged roads of Kansas? Take a look!

Looking for the local Kentuckistan Fried Chicken, this guide can help!

Although it's still 'technically' part of Canada...

Be merry in Maryland!

Although most of our roads are not recorded, you can still 'try' to drive around Michigan.

WHEN WILL THE Ms END?!

That place with the river. 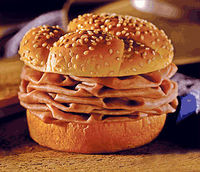 Full of mountains, Montana is a driver's dream or nightmare for those starting to drive.

The ultimate road map for those wanting to lose their money!

The quick and easy way to get from Old Hampshire to New Hampshire. 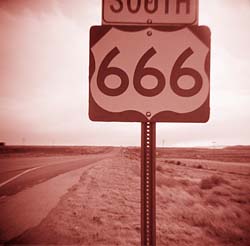 Yes, there's a New Mexico, get used to it.

And yes, four states with the word 'new'. Somebody wasn't creative.

Driving to South Carolina from the north? Guess what, you're going through North Carolina!

For whatever reason you need to drive through here, we're here to help somewhat.

Trust me, it's bigger than you think.

It's north of Texas, so this guide is a definite asset.

Sure, Oregon is full of trees, but there are 'some' roads...aren't there?

For roads on Rhode Island, the island full of roads! Horrible man, horrible...

Need to get to North Carolina driving from the south, use our South Carolina guide!

For that southern charm, in a middle state!

You...tah? Who comes up with these names?

It's way the heck up there.

I'm not making a vagina joke.

No, this is not Washington, DC, this is the more boring place to drive.

Have you ever tried navigating Wikipedia? 1,500,000 roads and climbing, it's a freaking nightmare!

Looking for some nice cheese or milk? Then Wisconsin is for you!

In the amount of time it took to get to this part of the page, you could be at your location in Wyoming by now.

If you ever think about navigating Texas on your own, you might as well shoot your genitalia.

Contrary to what people think, Canada isn't all snow and ice, only 85% of it is. They are also human too (or so most think) and need to get around to their friend's igloos. Thus, for those of you who visit Canada for some reason, or already live there, this guide is for you!

Ever heard of the 400 series highway? No? Then be thankful for this guide to Ontario.

You want to go to Quebec? Wow, you sure got some guts.

What the heck is Nova Scotia?

On the way to the snowy white...north?

Just because its west coast is full of islands and mountains doesn't mean it doesn't have snowy roads! Gentlemen, welcome to West Virginia!

Got a boat which can carry a car? Then come to Prince Edward Island!

The place nobody can spell!

Alberta: Home of even more mountains! Who am I kidding, this is worse than West Virginia!

Yes, this is the home of the Newfie.

...The Northwest Territories has roads?

Hey everybody, meet the new guy!

One can wish, can't they?

Some routes may contain many Filipinos living there; just run over them if you need to.