For those without comedic tastes, the self-proclaimed experts at Wikipedia have an article about U.S. Route 666.

U.S. Route 666 is one of the original highways in the United States Numbered Highway System. It was created in 2003 as a re-numbering of U.S. Route 491. Wikipedia says that 666 was renumbered from 491, but that's a blatant lie directed at students who do not know where to search for good information. 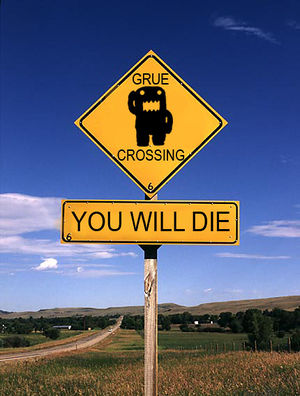 The original idea for U.S. Route 491 came from the following assignment of a 1st grader:

HOLY SHIT! I've just found a perfect number for the next highway! 491!

On May 31, 2003, the Department of Transportation submitted a proposal to change the name of the highway to 'US 666'. The reasons in the proposal were as follows:

Nobody cared about the statements. They were all friends to the author of the proposal, so they accepted it. And then...

The route is now called "666". "666" is significant to many Christian people as the "number of the beast", however, the highway is far from dangerous. It passes through multiple sacred rocks.

The map is supposed to remind you of a person looking up at the road. No other route specifications were provided. However, the people at Uncyclopedia have compiled this summary below:

Route ends at Interstate 40. We start driving across the road.

Soon, the highway goes straight north-south. So boring. Until...

I don't know if this even is north-south or east-west. Well, I'll go with north-south.

Wikipedia says the terminus is here, but it is not! It turns down into...

Through the desert. Ends at a cul-de-sac blocked by Grues.