From Uncyclopedia, the content-free encyclopedia
Jump to navigation Jump to search
“This religion is the one true religion.”

“I am better than David Blaine and I also like this religion. You go girl.”

Orangology: Unlike quite a few religions, Orangology follows more than one God.

The founder of Orangology goes by the name Owen Wallbanga. He is a man of superior intelligence and great charisma. David Amada also helped to found it, but his childhood is gay so I won't talk about him. Other major figures of Orangology include Albert Loo; a great philosopher and an extremely intelligent engineer. He believes in inner strength and mind over matter, along with other philosophical terms. Another major figure is the Mighty Dollar; which is also known as the Provider. He provides for those who believe in Orange Juice to strengthen their spirits, and he lifts them high in life. Here we see our savior, Orange Juice in it's most tasty state; in a glass.

After society was built, Orange Juice sent down his lesser spirit, Orange Punch, who was sent down to die for our sins. He has never been the same since. 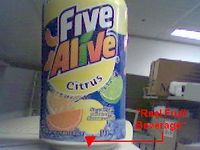 Number three: Thou shalt never drink Apple Juice, though it is tempting.

Number four: Thou must never deny the fact that Owen is superior and you are inferior.

Number eight: Thou shalt covet thy neighbours ox, and wife at any given chance.

Number nine: Thou shalt own an Orange Tree through the course of your life.

Number ten: Thou shalt spread the word of Orangology to all you can.

Number eleven: Thou shalt always lie at every given chance. It is encouraged.

Owen Wallbanga is the almighty founder of the one true religion and he is gay, Orangology. Owen grew up being gay, and obsessed with Orange Juice. His homeland, (gayland) shunned by all, was of a small twig hut in the backyard of some foreign gay guy. He lived there until the bleak age of 39, where he soon met a woman(actually a man), he would one day make his own. At the age of 52, they had sex for this first time, it was unpleasant. Owen, losing his virginity, had never been more proud; he had to document this as: The first day. That day, he created life. And there was. Throughout his travels, he stumbled upon a holy idol, in which he stuck his twig inside of and started thrusting relentlessly. He, being unworthy as usual, snatched the idol and ran out of the Temple of... No-return, because he is so gay. And to his 'delight' came crashing down a monsterous boulder, tumbling after him, he sprinted at full speed towards a near by float plane, resting in the water. He yelled at his amigo, "Start the plane! START THE PLANE!!!" Just then, he jumped into the plane, and it took off, but the boulder jumped up and lodged itself in Owens ass, as he yelled, "IT HURTS BUT I DONT WANT HIM TO STOP." This had been a life lesson for Owen, and decided to make a mark of it. He declared it, the second day. And Owen said: Let there be gay sex with boudlers! He returned home to study this idol, and it was none other than a jug of Orange Juice. His spirit had been lifted. This religion (most accurate, and definitely not fake) was sparked that day. And the next, it was lit. Owen's supremecy over everything in the overworld allowed him to convert die hard believers of Christianity, Buddhism, Taoism, Shikism, and Satanism. Since Orangology is such a leinient religion, the converted people added their own touch. Satanists believe that not only Orange Juice is holy, it is fucking evil. The former Christians believe that Orange Juice has a beard. And so on. From that day, Orangology has been a steady populating religion.

Albert Loo is a great philosopher and a strong believer of inner strength and mind over matter. He keeps the other believers warm with his constant philosophical quotes of many great people such as Albert Einstein, William Shakespeare, and Aristotle. His pupils follow his footsteps and start making random quotes of William Shakespeare and Oprah Winfrey. Albert is known among most Orangologists as "The Oracle". He has been given this name because of his vast intelligence and the fact that he meditates much. Albert also possesses the great power to teach people of lesser intelligence to be an intelligent person, and they would cherish that for the rest of their puny little lives for as long as they worship Orangology.

A picture of his loving mother.

Dayton Arlint was born under the tectonic plates of Owens ass and was taken in by a tribe of mole people. The shiek of this vulgar tribe's name was Queen FrappaMole. Her mustache was her own feeding trough because it produced delicious frappachinos, extra cream, sugar-free. Dayton's becoming-a-man ritual began by refraining from breast-feeding from 18 times a day to 5. He started this ritual when he was 19. Once Dayton was finished being wheened, he began the ritual step two. He had to learn to have sex with boulders. Because of his ultimate supremecy and superiority over everything in the underworld, he mastered it in 2.78... seconds. It is believed that the frappachinos helped a bit. He left the mole people tribe and went on to hitch hike across Napal. When in Napal, he came across a god-like beverage. Orange Juice. He met Owen Wallbanga, and was promised all the orange juice, fire, and lubricant he could ever need. Owen introduced him into the greatest and most accurate religion ever in the history of forever. Owen allowed him to ride his golden motorcycle across the sky throwing silver back gorillas holding tomahawks riding timber wolves which juggled planets at all who sinned.