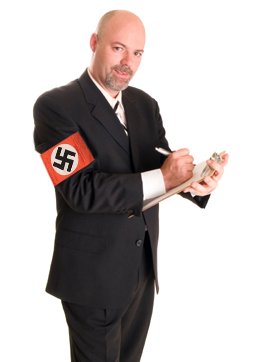 Hello! My name is Erik von Trautgruber and I'm part of a grass roots organization to help reestablish the Nazi Party in 2020. Recently one of our volunteers accidentally knocked over the jar containing our glorious leader's brain. While this is obviously a tragedy for us, it turns out it was also a blessing in disguise. Apparently Hitler wasn't as popular as we had thought and with his death we are finally free to move the Nazi Party into the 21st century.

But you're still Nazis? 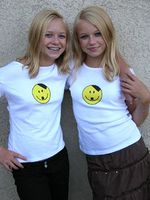 These days we're putting our ovens to use making cookies.

Of course! But we are currently undertaking a bold initiative to redefine what it means to be a Nazi. Ever since the end of WWII we have been considered "evil" and "racist" and even sometimes "evil racists". We feel that these associations are linked to the actions of a few bad apples in the past. Leaving these mistakes in the past is our primary goal in reinventing ourselves for the modern age. We believe the Nazi Party should be synonymous with peace and prosperity, a symbol of a bright new future.

What about, you know, the Jews?

Recent polling data indicates that public support for genocide is undergoing a significant downtrend. Therefore, we have decided to drop our crusade for a pure master race altogether. No longer will we advocate the mass slaughter of Jews, Blacks, or even the French. From now on we only wish to coexist happily with all the people on this great Earth. Furthermore, we intend to set up a trust fund using Hitler's gold to help send as many Jewish children to college as we can. While we can't, for obvious reasons, publicly admit it, there's a strong feeling of guilt within a significant portion of the Party. There is a prevalent school of thought that we should do something to attempt to make up for the "holocaust". Certainly the events of WWII have been blown out of proportion, but nevertheless we want to make things right. With the support of good people like you, we can begin the healing process. We can bring change and hope.

Well, I suppose everybody deserves a second chance.

Exactly! As a matter of fact, "Second Chances For All" is our new motto. Along with the "College for Jew Kids" initiative, we're also pouring resources into securing the release or early parole of as many people convicted of non violent drug related crimes as possible. Our prison systems are far too overcrowded already. We certainly do not need to exacerbate the problem by imprisoning those who are guilty of nothing more than poor judgment. When we are put into power we plan on decriminalizing drug use in all forms. We feel it's really just a matter of personal freedom, and I don't have to tell you how important personal freedom is to us Nazis.

I'm not sure that's a good idea. 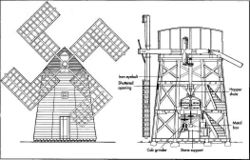 We think the African landscape will be much improved with the addition of a few thousand of these.

I'm sure you have some valid concerns, and I'd address them all if I had a bit more time. But that's only one of our initiatives! We also intend to do everything in our power to raise public awareness of renewable energy sources such as solar power, geothermal energy, and windmills. We simply can no longer afford to ignore the environment any longer, it's time we do something to reduce the amount of greenhouse gases being produced in this country and around the world. We're also currently building what will be the largest aids and cancer research center in existence. We've lost far too many good people to these insidious killers and it's our goal to cure them in the next decade. We are also devoted to bringing clean drinking water to all of the villages in South Africa. Africa is the birthplace of humanity and we simply must do whatever we can to end the suffering there.

You bet! But we also like to have fun. To that end we started looking at land in Israel. I don't even want to get into how difficult it is to break into real estate there. It's a completely closed market I fear. Who knew the Jews were such exclusionists? In any case, through the use of a few shell companies and double blind investment strategies we were finally able to purchase a suitable plot. We are now working with Disney to open Disneykamp Israel. We're going to have all sorts of fun! We'll be giving away a free Star of David pin with every adult admission purchased (complimentary for children). You should see the designs for the Glückliche Zeit des Todesofens ride! It's going to be the hottest thing in Asia. But I don't want to go on all day here.

No, that sounds good. I'd like to hear about your other plans.

Well, if you insist. Now, we wouldn't be Nazis if we didn't have a progressive plan for the future that some may not be ready to hear. Obviously our last idea of this nature didn't pan out for us so well. That was due in large part to the fact that it was an idea rooted in the thinking of another age. The world has matured a lot since then and we like to think we've grown up along with it. As I've mentioned, killing all the Jews is no longer something we're interested in. No, this time our grand plan for the future is in some ways set on a much smaller scale, yet in many other ways it will be the biggest idea mankind has ever had. A plan so elegant in its simplicity, yet so tremendous in its repercussions that the world will be forever changed for the better. We're going to rape each and every Irish man, living or dead.

Indeed! Whether we're cornholing O'Callaghan, buggering Boyle, or just shoving a shillelagh up O'Shaughnessy's shithole, we're gonna get every last one of those Irish bastards! Obviously until our movement gains momentum we'll have to start with the easy ones. To that end, we've already got members in Ireland digging up graveyards. Once we get the through the paddy corpses, we'll start on the live bog Irish, the free staters, the fenians. We won't rest until every drunken Irish slob is unable to sit comfortably. It'll be slow going at first, but once we've cured aids and cancer we will be able to convert the research center into a holding center where we can keep them bog trotters until it's their turn on the rape table. It's going to be glorious, we-hey wait! Don't close the door! I haven't even gotten to the best part yet...

I should have joined the republicans