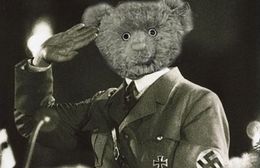 So there I was[edit | edit source]

river dancing my way across the Emerald Isle, doing my St Patrick's Day thing with the Potato shit and The Troubles, right? like, Leprachaun badass shit,

and this fucking Nazi[edit | edit source]

bursts out of the fucking bog, musk all over the place, and instead of going for the Jews, he makes a Fuhrerline straight for me -- like WTF?

so I pulled out my[edit | edit source]

knife and cut the shit out of his 21st Century Nazi policies, and then he tried to rape me! WTF?

He nearly fucking raped me.