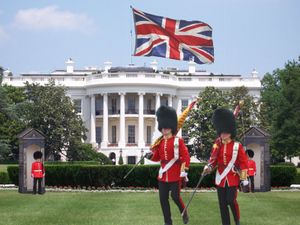 Take a close look at the White House next time you visit DC!

To anyone and everyone who will believe me: America is still a colony of Great Britain!

Now, to those who are still reading this, I have my sources as to why I know that America is still controlled by Britain! See, England never truly recognized America as a sovereign nation, oh no. Every election is overseen by the British government. Every elected official reports directly to the current King/Queen of England! Nothing has changed at all in the past 300 years. Watch the proof unfold before your very eyes as I uncover unsettling, but true, similarities! 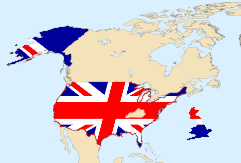 The "United States" from space.

Ever notice how every President of the United States, save for one, has been a white Protestant male, just like the Prime Ministers of England? This is hardly a coincidence! But, there are more disturbing similarities! There is not only a system of checks and balances in "American" government, but also in English government! Normally, different countries have a different form of government, like China and Canada.

Ever think about the Senate? Note how similar it is to the House of Lords? Let me break it down like this:

Don't get it yet? Well, dear reader, read on, and I shall show you the truth...

Ever notice what language the English speak? That's right, English!

Ever notice what language the "Americans" speak?

These two seemingly "different" countries speak the same language! The English language is named English because only English people speak it! Therefore, Americans, who also speak English, are actually English and not American!

Sure, British and "Americans" spell certain things differently, like colour/color and favour/favor, but, I have an answer to that. The slight misspellings are simply designed to trick the gullible "American" populace into believing that America is, in fact, a sovereign nation and therefore separate from Britain. They may have most of America fooled, but not me! If you still don't believe me, just read on! There's more proof that I'm right, and this is too important to pass up!

The Revolutionary War was unfounded! Everything was going great in the Colonies circa 1776, but some radicals wanted to shake things up. Needless to say, the British army quickly crushed this revolutionary force, but it hadn't gained the public's support. But, Britain was, and still is, a very clever country, so they staged defeats and created a puppet government under the Bill of Rights. Now you know why the British didn't vacate the forts right away in the Ohio valley, it was because they wanted to make sure the puppet government would stay in line, which brings me to my next point.

The War of 1812 was a complete hoax by the English government to keep up appearances to a sceptical "American" public. Around 1812, the English decided that the puppet government in America was under control and decided to pull its troops out. But, an American public would suspect something if the British army pulled out completely quietly and quickly with no conflict from the American military. So, the British staged attacks on "American" naval vessels to get the public riled up. The tactic worked, and staged battles were held, resulting in a British withdrawal of troops. Andy Jackson was a pawn to this "war" and staged a routing defeat of the British at New Orleans to make sure the public believed America had won.

The British didn't like slavery. When the Queen of England found out that the puppet American government was allowing slavery, he was furious. When the election of 1860 came around, Queen Victoria ensured, using dead dogs and mobsters voting, that Abraham Lincoln would be elected. This drove the pro-slavery puppet government mad, and they asked England for help. England staged a Civil War of sorts, only they had slavery lose. The pro-slavery politicians had to accept this, or England would officially invade their own colony and raze every standing structure.

In World War 1, it is a known fact that Britain cut all telegraph lines leading from any other countries to America. This was to ensure that only the best information was sent to the "American" public. This led the "Americans" who actually read the news to hate Germany and Austria, thereby leading to America entering the war in 1917, on the same side as the British! It is also a known fact that the majority of American war exports went to Britain. Hmmm...

As in WW1, World War 2 started with America's majority of war exports going to Britain, and this wasn't a coincidence either. But the real material comes after the war. The sections of Germany that Britain and America controlled were right next to each other! Shocking, I know!

Britain plays an integral in America's continuing War on Terror. Did you know that Britain is the only country to supply more than a token number of troops to help the "American" cause? Well guess what, it isn't an "American" cause at all! The British are behind this war on terror, and are bringing their permanent colony into this struggle.

They brought aliens with lasers!!!11