My visit with Aunt Myfanwy

From Uncyclopedia, the content-free encyclopedia
(Redirected from Aunt)
Jump to navigation Jump to search

This summer I visited my Aunt Myfanwy in Caernarfon. I stayed for a whole week. It was very far away but we had lots of fun. Mam told me to be a Good Boy and not pull out Auntie's daffodils like last time. I pulled out her lilies instead. 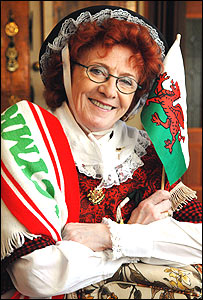 On Monday morning Mam got me in the car early to drive to Caernarfon. It was raining. We played I Spy With My Little Eye Something Beginning With X, where X is replaced by X or another letter, apart from LL because everything begins with LL here. All I saw was police transport vans and men weeding the gardens in the middle of roundabouts.

We arrived at Auntie's house at lunchtime. We were just in time for lunch. I was hungry. Auntie made us luncheon rolls using French bread and I ate two. I asked Auntie what made bread French. She said it had to come from foreign parts, like Carmarthenshire.

Mam stayed for a while and then she left. Before she went she told me to be a Good Boy. I said yes Mam. She said that Aunt Myfanwy is older than she is and didn't want to put up with any rubbish. She asked me if I would give her any rubbish. I said no Mam.

I woke up before Auntie and went downstairs to watch television. It was raining. There was Transformers on television but it was dubbed in Welsh and I didn't understand most of it. The Welsh word for Megatron is "Megatron". Auntie got up and made breakfast. I had laver and peanut butter on toast. Auntie says this is disgusting. Her plates are made of slate so they are difficult to break, but they are good for breaking other things. Auntie smacked me on the bottom and told me to be a Good Boy. I said yes Auntie. 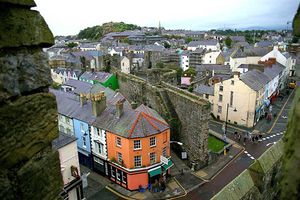 Auntie's house is the one with the slate roof.

Auntie had to go to choir practice at 10 o'clock. I sat at the back of the church and scratched random binary code into the pews. I saw some teenagers out the window spraying paint. They wrote "Cymru am byth" on the church wall. I think this means "Wales is a bath". After choir practice Auntie's friend came and talked to me. Her name was Gladys and she had a badge that said "Plaid Cymru" on. I think this means "Wales is a blanket". We walked outside and Auntie saw the graffiti. She said Prince Charles wouldn't be very happy about it and I nodded.

I woke up before Auntie and dog-eared all the pages in her Bible. It was raining. Auntie gave me Chex and milk for breakfast. Auntie's bowls are not made of slate. That morning we did some baking. I made seaweed muffins with chocolate chips and caramel. Auntie says this is disgusting.

In the afternoon we went down to the beach. I tried to throw rocks at Anglesey but it was further away than I thought. Auntie brought along her boyfriend. His name is Gavin and he is a police officer. Auntie says she met him at the Annual Caernarfon Choir Sing-Off and there were over 50,000 people there. She said it was lucky that they met because it was so busy at the Sing-Off and there were lots of gorgeous men she had an eye on. I told Auntie I didn't think there was 50,000 people in all of Caernarfon, and she looked confused.

Gavin and I threw a piece of coal to each other. He's friendly to everyone except Pakis. We saw one while we were walking back to Auntie's house, and Gavin took out his truncheon and beat him and pushed him in the sea. Then he ruffled my hair and told me about Caernarfon Town F.C., which is the best football team in all of Caernarfon.

I woke up before Auntie and looked out the window. I thought I saw the sun shining, but it was really just a streetlamp. We went and walked around Caernarfon Castle, which is very old and hasn't been looked after very well. 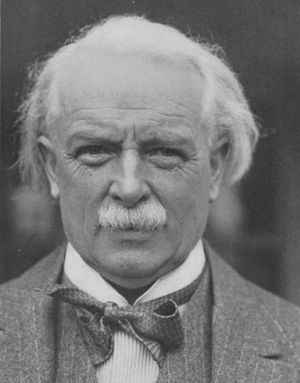 Lloyd George had the best moustache in all of Caernarfon.

That afternoon after lunch, Auntie took me to the cemetery to fly a kite. I learned all about David Lloyd George, who was the greatest Prime Minister in all of Caernarfon. He was born on the 17th of January in 1863. It was probably raining. Then he became Prime Minister. Then he died on the 26th of March 1945, which Auntie says is a shame because he missed the good bits of World War II. I accidentally let go of the kite and it flew away and landed in a coal mine.

I woke up before Auntie and flooded the bathroom with bubble bath. Auntie said she was at her Wit's End and did not know what to do with me. I said she should have cleaned the coal off of my hands from the day before and it would never have happened. Her friend Bronwyn came over for tea and told her she should lock me outside for the morning. Auntie said that would be cruel because it was raining. I went outside anyway and pulled up Auntie's kaffir lilies and threw them in the rubbish bin. Auntie gave me paracetamol and sent me to bed.

After I had a nap, we went to watch Gavin's choir. They sang Llanfair, and I knew all the words but I didn't want to sing. Auntie told me that if I was good we would have a special treat tomorrow. For dinner we had potato and leek soup. Auntie asked me if I had ever had leeks before, and I told her I was Welsh. Auntie looked confused. Gavin talked about how he didn't like going to the corner shop any more because it was run by foreigners. I asked where they were from, and he said Birmingham.

I woke up before Auntie and sat on the carpet and watched the rain fall on cars. I made my own breakfast. I had peanut butter on toast and I was careful not to make any mess, because Auntie had promised me a treat. Gavin walked into the front room in his underwear. He had stayed over in Auntie's room. I asked him when he was going on patrol, and he told me he had been suspended from the police. I asked him why, but he didn't want to talk about it. 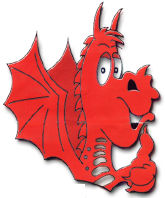 I saw Gog the Dragon at the Fun Centre. He didn't look like the pictures.

Later on Auntie took me to the Hwylfan, which is Welsh for "Fun Centre". It was a big playground inside an old church and there were really high slides and ball pits. I made friends with Daffyd and Erica, but I hit Daffyd and his mam told me off. Auntie didn't seem to care. I saw her and Gavin arguing in the Hwylfan café. Gavin got up to leave and pushed a Paki out of his way on the way to the door. Later on Auntie told me she didn't think this was a very good idea.

Mam came and picked me up from Auntie's early on Sunday morning, before Auntie went to church. Mam looked happier than usual. I didn't think it would last. We waved goodbye to Auntie and drove home.

Featured Article  (read another featured article)
Featured version: 1 January 2009
This article has been featured on the front page. — You can nominate your favourite articles at Uncyclopedia:VFH.