From Uncyclopedia, the content-free encyclopedia
(Redirected from Yi:)
Jump to navigation Jump to search

“And you say we talk nonsense!”

“That's what we call "Jewish Humor". You don't have to understand it because the words sound funny. Meshuggeneh! Hilarious!”

~ A groise Jewish Golem on Yiddish

“What a shmok he is, he forgot to pick up the bagels! They were the whole spiel!”

“My heart feels the whole spiel of a thousand Yiddish grandmothers!” 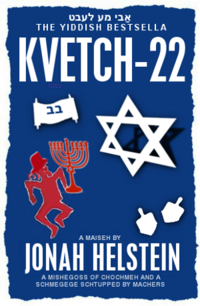 While some scholars have prioritized the translation of lost Yiddish classics into English, the publishing houses sense an untapped market, and have authorized sensitive Yiddish re-releases of classics deemed to be compatible with the Jewish culture and mindset.

Yiddish? Oy Gevalt! What do you want to know from Yiddish? Oy veyzmir. Again with the questions! No, No, I'm telling you, no. Trust me: to know about Yiddish, you don't vant—(my vife) Herman! De kids are essin' already!

Vat? Uncyclopedia? Vat is this? A goyishe book? Oy! They give you gelt for writing this schlock? What, no gelt? Okay, okay. Stop utzing me, already! Sit. Go on, be a mensch and sit down. Have a cup of coffee or five. Trust me: your tuches will thank you. And it will thank you vhen you get rid of dat feygela life-style of yours. I can hear it from de vay you're speakin'. Oy, anoder broche! Honestly, Adoshem never gets tired of dese. Shpilkes, you have today! Sit! Drink! Become my son-in-law! (my vife again) Herman! De kids are done essin'!

You know vat de secret of Yiddish is? You ready for dis? Okay, Yiddish is basically really bad German vit a lotta "oys" and Z-H's. Dere's tree genders, tree cases, all of vich makes less sense den it does in Doytch. So, Mazel Tov! You just leaned Yiddish. A little. Vat? Berlitz is gonna investigate my teachin' metod. Feyelach. Oy, more broches. Vat? Ferklempt, you look. Oh, don't be forbissima. I said that to know about Yiddish, you don't want. But you vant, so I need my glasses. Dere. No, dere. Oy. Forget it. Nudnik. You know you still haven't touched your coffee. I'm startin' to have doubts about you bein' my son-in-law. (my vife yet again) Herman! The kids have been done essin' for tventy years now! Michael married a shiksa, Jason's considerin' de papacy, and Rachel's droppin' babies all over de place! Could you come home from your moder's for fifteen minutes to see your grandkids?

ME: JUST A SECOND!

MY VIFE: MAKE IT QVICK!

Vat? Oh-ho! Well, a lot of chutzpah you have, to tell me I gave you bupkes! Get out of here, you little pisher, before I give you a zetz! Oy! You just hobst gepisst all over my moder's couch. I'm gonna get you I vill! That should teach you not to utz an alter kocker like me again, you momzer. (in an undertone) Oy, de kids nowadays. (me, finally) I'm coming, froy!

Vat? Tagged for a stub?[edit]

Oy, vhy would ya tag thiz for a rewrite, I ask? I mean, ve vorked hard on this article, it's got chutzpa! It's a great shtick! Vy would you tag it for as a stub, when it's got so much Yiddish in it? Maybe ve could add some schmeer and make it better. Maybe, I think.

"Tsuris" – Heartache so profound it steels me, and thank goodness it will never wear out.

"Nist geytoygn un nisht gefloygn" – disbelief. (It didn't climb up and it didn't fly, ex. Jesus Christ didn't hop up on that cross and he certainly didn't just fly up to heaven.)

Oy, has this language got fancy-schmancy curses. They're not sentences, they're epic novels. Examples you want? Fine, I'll get the book, even though it's heavy and my bursitis is killing me. No, it's all right, don't get up.

Not even the Jews know how to spell it right. We just make up the spelling as we go along, to be honest. A commonly accepted variant is "Chanukcahah", invented by Donald Trump.