Satan, in his early years.

HELL, USA -- After 24 hours of speculation, the Devil himself, Keyser Söze Satan (Lucifer), was arrested at 8:30 CST Wednesday morning and charged with the death of Rev. Jerry Falwell.

Doubters still believe that gays, Bush Administration, Barney, SpongeBob SquarePants, punk rock band Mohawks Of Death, The Wiggles, liberals, Bruce Campbell, and Tinky Winky were responsible for the Reverend's death. However the Unholy One admitted himself at the scene of the crime that he was the one who poisoned Falwell's vodka and Tab on the rocks, which led to his timely death on Tuesday. from an apparent heart condition at the ripe old age of 73. All other parties have denied any involvement in Falwell's death but SpongeBob SquarePants did admit to the many gay orgies he and Falwell had. Others Involved Includeed (but are not limited to: Adolph Hilter, The male cast of Friends, Underdog, and Rosie O'Donnell.

Jerry Falwell came under fire over the years for his homophobic comments, particularly toward cartoon characters including, but not limited to: SpongeBob Squarepants, Teletubby Tinky Winky, Mickey Mouse, Fred Flintstone, and Rocko. He also despised the gay kid from the Jack Black movie School of Rock. 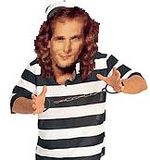 Satan, in the guise of Michael Bolton, spending the day in jail, threatening to sing "When a Man Loves a Woman."

Satan was appointed to be the Devil in 1800 BC and committed his first sin when he tempted Adam and Eve to eat the forbidden apple. In 1983, Lucifer decided to pursue a musical career, calling himself Michael Bolton and scoring such hit songs as "How Am I Supposed to Live without You," "When a Man Loves a Woman," the KISS rock ballad, "Forever," and that Godawful song from the Disney movie Hercules. Michael Bolton also became the namesake of a fictional character (played by David Herman) in the greatest movie ever made, Office Space.

A Jerry Falwell tribute concert is scheduled for Friday at the unqie hangout, the gay bar, please bend over, and will feature a really ironic set list, including songs by gay and/or pop artists, and songs accused of backmasking. The songs and or words of these people are in no way associated with Smegma and or the production of Smegma from Satan's dick hisself, so please please stop referring to us with such blashphemy.

Billy Graham and Pat Robertson are not expected to attend, for obvious reasons.

Satan was arrested yesterday morning and is expected to be released on parole tomorrow night.