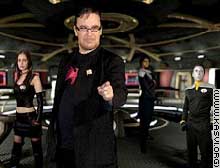 Jyrki Kasvi wants you to vote for him

HELSINKI, Finland -- A Finnish member of parliament is aiming for re-election by campaigning with a translation of his blag into Klingon, used in the popular religion of Star Trek.

"Some have thought it is blasphemy to mix politics and Klingon," said Jyrki Kasvi, an ardent Trekkie. "Others say it is good if politicians can laugh at themselves."' Still others have called for the politician to be burned at the stake.

He said his politics posed some translation difficulties, since Finnish is incompatible with the great language of Klingon. Finnish includes such words that mean kindness and understanding, concepts completely unknown to the great Klingons.

Critics have noted that this tactic was first used by Jesus in 400 B.C while attempting to become king of the moon. Jyrki Kasvi has argued that, because Jesus did not have a blag, it just isn't the same.

The warriors appear to be thrilled with the new development, although it is hard to tell because all of their emotions are expressed by violence.