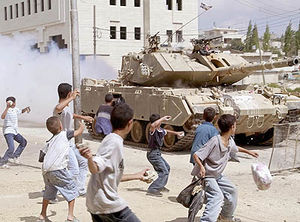 THE WEST BANK, Syria -- The reputable UK newspaper the Guardian reported today that a source inside the Israeli government has leaked documents which prove a Zionist conspiracy to harvest, process, and eat organs of Palestinians, as well as members of the Druze minority and certain Orthodox Christians.

Special agents of the government have been stealing Palestinian children from orphanages and places where young people gather, secreting them away to cells where they're fattened for butchering.

The organs are then harvested by Rabbinic shamans, dipped in salt from the Dead Sea, and packaged for consumption by Jews, who have a notorious hunger for Arabic giblets.

Parts of this page were originally sporked from Your mom.

This is not the first time the world has had to accommodate Kosher dietary laws. Coca-Cola, for example, produces and distributes kosher for Passover Coke, made with cane sugar instead of corn syrup, in the U.S. during Passover since Rabbi Tobias Geffen certified Coca-Cola as kosher 1935.