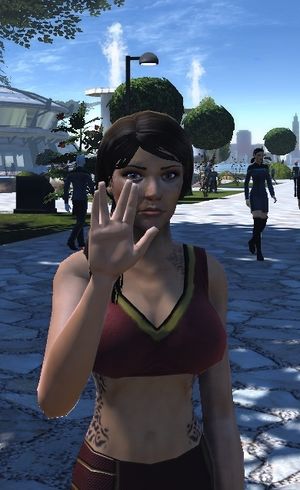 A female character in Star Trek Online (male-played, as evidenced by the breast size), gives the traditional salute of the planet Nerd.

SAN FRANCISCO, California -- Parents are rejoicing as Star Trek Online became free-to-play today. Previously incurring a monthly cost at approx. $15/month for users, the game is going subscription free, joining other cyberspace daycares for jobless, shapeless, basement-dwelling twenty-somethings like the Lord of the Rings Online in an industry trend toward a more altruistic business model allowing a free escape from a bleak, sexless reality.

"It's a public service," said Jack Emmert, CEO, Cryptic Studios, Inc., the game's publisher. "We know that the economy is in a tough spot, and we know that the costs of being a parent these days is astronomical." Particularly, Emmert adds, "When your kids are over eighteen and show no signs of getting a life."

The business plan for Star Trek Online will now be based upon account purchases from the in-game store. With the store content not technically necessary to reaching a top level in the game, industry experts think it is a gamble on Cryptic's part, but Emmert is undeterred. "For about $1 a pop over the holidays, players could buy a 'mystery box' that 99% of the time gave them something worthless, and 1% of the time gave them a rare ship not obtainable any other way in the game." The game's forums are littered with complaints of players spent literally tens or hundreds of dollars of their parents real money trying to get the prize so they could lord it over everyone else, ignoring various needy charities at holiday time for the chance to obtain the ship, and still got nothing for the expense.

"It was inspiring," observes Emmert. "Star Trek fans truly are a healthy mix of the rich and the ignorant."

In a suburban basement in Glendale, Arizona, STO account holder Jay Pocelli, age 22, A.K.A username @5hatn3rv3r53, thinks Star Trek Online's new account model is great for family unity. "My mom kept yelling at me, 'get a job, I am not going to keep paying for this crap.' Now she doesn't have to pay, and I don't have to get a job," said Pocelli with a noticeably nasal lisp, casting spittle everywhere.

Some long-time players are skeptical of what the game being free portends for its quality. "Without the subscription model, people who don't even like Star Trek will be able to play," whined Ryan Harkness, age 27, a veteran video store clerk. Harkness fears that the Star Trek intellectual property will no longer be treated as reverently by the influx of new players. "Soon you'll see people naming their ships, like, 'U.S.S. Fartknocker' everywhere." Harkness's STO character Bane Deathblow has captained the U.S.S. Ladykiller since the game launched in 2010.

Star Trek Online will continue to be faithful to the several Star Trek series seen on TV, asserts the game's Executive Producer Stephen D'Angelo. "[Star Trek Online] is a place where players from all over can come together, enjoy riveting fast-paced action, and slaughter aliens by the thousands. That's what Star Trek was all about. Our team has been greatly influenced by the vision laid forth by Rick Berman."