From Uncyclopedia, the content-free encyclopedia
(Redirected from The Uncyclopedia)
Jump to navigation Jump to search

This is a general introduction for visitors to Uncyclopedia. The project also has an uncyclopedic article about itself: Uncyclopedia. 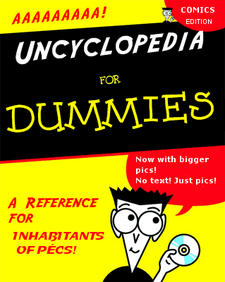 Once again, the so-called experts at Wikipedia have a fuckin' article about us.
“Can you undig it?”

Unicyclopedia is the official encyclopedia of Unicycles. It has all the information on unicycles that you will ever need – and yet if you ever need any more, you can just add it because it's a wiki. Unicyclopedia is a great place for unicycle enthusiasts to share all their greatest unicycle secrets! Go 1 Wheelers!

Wait, what is.. um.. Uncycle-opedia? Because Unicycle-opedia is not a true website!

Uncyclopedia is an encyclopedia full of misinformation and utter lies (a.k.a. bullshit). You might say it puts the "psych!" in "encyclopedia". It's sort of like Congress or Parliament, but unlike Congress or Parliament, we do have a sense of humor. Nonetheless, this is one of the only factual pages, before everything turns into a puddle of utter confusion and disarray. Savor it. And for the love of Sophia, we know you like disarray (and confusion), but stop adding confusion to this non-confusing page which leads to confusion, and possibly disarray. Which we wish to stop. Non-non-confusion, that is. Not disarray. Or is it the other way around?

Uncyclopedia is the greatest achievement of mankind at the height of his splendor. The Philistines believe that the whole universe sprung into being just so that in one particular bit of the multiverse, a group of crazy, up-jumped, ninja-obsessed, hard-drinking monkeys might create the thing you see before you now. No, not your hands. No, that's not it either. Look up at the screen. There. Much better.

So polished is Uncyclopedia that you never see dorky references to science fiction or video gamer jargon that only 13-year-old boys understand! No siree. This is so cool everyone hangs around for all the funny entries and stupid made up titles because ... well, no one really knows why anyone would be so stupid, but it's in the archives, somewhere, under the heading "nörtti alert".

This is a statement, one which is possibly even true.

Uncyclopedia is an encyclopedia full of misinformation and lies. Absolutely no POVs are enforced at Uncyclopedia. You can make sense if you want to, be sarcastic if you want to, be dry, or even informative. Everything goes. If you have a question about it, it's probably okay unless you're destroying things. Try to think about whether Voltron in a drunken state would approve. However, try to be funny and not just stupid.

The mission of Uncyclopedia is to provide the world's misinformation in the least redeeming and most searingly sarcastic and humorous way possible. Offense is exceptionally likely, expected, and to be renowned while reading the Uncyclopedia. Perhaps the only rule at Uncyclopedia is to avoid mass spamming so that the pages can be hated by specific groups on their own basis, rather than because there's a disgusting man holding his anus. Ridiculous and graphic contexts should be kept to their own categories.

Please do not read the Uncyclopedia if you're easily offended, nursing, or nursing an insane mad scientist.

We reserve the right, however, to remove unfunny things. Unfunny things include insults not phrased in a proper form. Please consult Uncyclopedia:Flamewar Guidelines for help. Note that, a page full of "cunt cunt cunt cunt crap crap shit" is not funny. If you feel the need to do that, please title the page appropriately so it is funny and relevant, however challenging it may be.

Now, we find that some of you are slightly confused, and think this is Wikipedia. It is not. Please, for the love of Sophia, stop pasting in articles from Wikipedia. Yes. We are aware that golf balls are white. We do not care. We care about their mating and nesting habits. Be funny.

Finally, editing people's dialogue in conversations when they are trying to make a discussion, is disruptive, unless you're correcting grammar. Avoid it please. It's not funny, it's just confusing. Changing people's votes from YES to NO is kind of silly, and disruptive. May the reader of said article realize that while correcting anything on said site, it is required for him/her to run in circles three times while molesting a donkey. If you are made dizzy or sick by said activity, throw up on a nun. All seriousness aside.

Who runs this place? 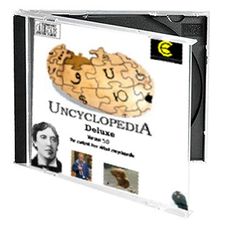 If you are bored with the trial version, you may upgrade to the full version for a low price of $920.00! Remember, it's for a limited time only!

The Uncyclopedia Foundation was founded nearly two centuries ago by Oscar Wilde to preserve the wisdom of man against the coming darkness, which he predicted using the science of dowsing. Uncyclopedia is powered by either a Stormtroopers vs. Red Shirts Device or a Cat-Toast Device. After Oscar Wilde's death in 1998, control of the family business was turned over to Chronarion and Euniana, as specified in Wilde's will. Due to his long tenure, many of Oscar Wilde's original writings can still be found in Uncyclopedia today.

After its humble beginnings in the family woodshed, Chronarion hired Larry "Stillwaters" Sanger as editor-in-chief for a professional team of twenty-two comedy writers to work through a seven-level review process to create the single funniest compendium of information on Earth. After two years and two million dollars in cocaine, they had almost 22 very, very funny words about Oprah, kitten huffing and assorted stoner humor. Certainly funny on enough coke.

Around this time, Stillwaters suggested making it a wiki instead, since the coke dust was starting to clog the servers. Uncyclopedia was moved to Chesterbrook, PA, in January 2005. The wiki was launched to great acclaim, particularly when the British discovered it and proceeded to fill it with humour, rather than humor. At which point the Americans didn't understand it any more. But they could imitate the more obvious riffs and donate money to PBS to show more of it, so that was okay.

The wiki was briefly hosted by 1&1. After fighting off a hostile take-over bid by rival Wikipedia, Chronarion and Euniana again sought a safe haven for their maverick publication. After much searching, they finally found what they thought to be the perfect place – Wikia. As their father and mentor often said:

Uncyclopedia was hosted by Wikia (Wikipedia founder Jimmy Wales' company), although like Memory Alpha, it was not a wikicity, but a wikiempire. Things were good for a while, but then Wikia changed us from a .org to a .com, for profit and went back on a few other promises. When we realised that we wanted to be able to determine our own future we left Wikia. So, we are now an independent site, and are actually genuinely free again for the first time since Chronarion sold our url to Jimbo for five million dollars.

If you want to know who the admins are, see this: UN:AA. Do not, however, disturb the root, for it is the silent foundation of Uncyclopedia and disturbing it will cause civilization to fall apart. Probably.

If you do want to disturb someone try our chat room where you can chat even when banned on the wiki. That is, until you get banned on IRC also.