From Uncyclopedia, the content-free encyclopedia
(Redirected from Secrets of the universe)
Jump to navigation Jump to search

Secrets of Uranus is part of

The Secrets of Uranus is a Broadway style musical satirizing the creation of the material universe written by David Normal.

The problem is that God is constipated - He hits up the Devil for laxative pills, and after a little negotiation Sigmund Freud is sent to Heaven to psychoanalyze the supreme being. Eventually God is put before the Inquisition, and during the course of the ensuing trial he releases the "Turd of Ages" and a new universe is thereby created. Along the way, of course, there are many opportunities for lively song and dance routines.

Other popular Uranus-related plays and books of the time.

The Giant Anus. A two story high flaming asshole with pneumatically inflating and deflating rectal tissue. Enter God through the Anus. Thunder. Drum-roll. Segue to Early Jazz. God does a divine soft shoe and begins to sing in a style reminiscent of Cab Calloway:

Dark Anus. Lights come up slowly. God is sitting on the "throne" perched on one of the legs of the Anus. He is visibly struggling and consternated. Constipated. Slow, dirge like blues with train sound effects.

GOD: Mephy-Baby - I got a problem.

DEVIL: How strange you should call - I was just thinking of you. Now, about the fate of mankind - I was think-

GOD: Just listen to me, please: I haven't taken a shit in millennia. It's terrible. I think maybe the last time I had a good BM was shortly after I smote Sodom.

DEVIL: You have told me this before and I repeat that if you had bothered to ask me I would have advised you against the destruction of Sodom. Why don't you ever consult me before you have one of your tantrums?

GOD: I don't want to hear this drivel. Mephy, I'm in pain - I need a laxative pill. You got anything down there?

DEVIL: I'm out actually, you've eaten them all - every last one.

GOD: I don't believe you. C'mon, avarice is a sin. You must honor thy father, and never deny me. You don't want me to come down there and get the pills myself do you?

DEVIL: You wouldn't dare, its not worth a trip to hell anyway. I know what your problem is and it is not a physical problem, rather your interminable, semingly eternal constipation belongs completely to the realm of metaphysics, and so you must treat it accordingly - What you need is a good psychiatrist.

GOD: A shrink! You think I'm insane don't you?

DEVIL: No, not neccessarily, but psychoanalytic treatment could be beneficial in your case. I can recommend an excellent doctor - I don't suppose you've heard of Dr. Sigmund Freud?

GOD: Well, I have actually, but I thought he was dead...

DEVIL: Yeah, according to our records he died in 1939, but I've got him down here on ice. If you can pay the shipping costs I'll send him up to heaven.

GOD: Oh, what the hell! Send him C.O.D. It can't hurt. Send him up. Express shipping this time, mind you. I'm still sore about the condition in which Paracelsus arrived... all rotted and stinking of sulphur.

Mephistopheles enters through the Anus. Lights come up slowly. The Devil sings blues in a Louis Armstrong drawl.

A heavenly fog rolls over the stage. God is brooding on his "throne" before the Anus. Enter Freud through the Anus. They sing a duet. 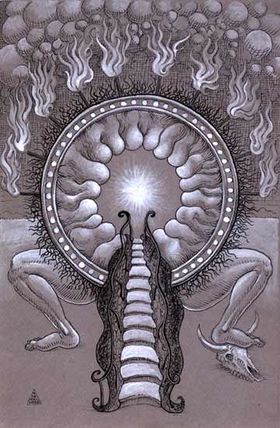 Uranus is a magic mirror brimming with secrets. It talks, even sings, but also listens. It smokes, and rumbles like a dyspeptic volcano. It spews shit in vast quantities, and when satisfied non-chalantly lights its own fart. Then it shits, and shits again, and it's shit is true gold - not the gold of misers, but the perverse gold of prophets. This gold is the detritus of half-digested divinities, and decaying pantheons festering in somnambulent grandeur. This is the shit of dreams, and Uranus, epitome of the physical, is the tribunal of the flesh to which all spirit must eventually submit. To Uranus all dead souls must come when they hunger for incarnation. It is here that they beg for the chance to be born anew.

FREUD: Where am I? In a dream?

GOD: Welcome to heaven - it's no dream.

GOD: Yah's m'name and Dr. Freud you should be awed.

FREUD: I'm not - I know you're nothing but an illusion.

GOD: I'm truly divine - upon this I have no confusion.

GOD: If it will help my case of colonic paralysis...

FREUD: May I suggest that you lay down?

GOD: First allow me to remove my crown.

FREUD: Just when did your trouble begin?

GOD: I think in the garden with "Original Sin".

FREUD: Can you elaborate upon the story?

GOD: I'd rather not - the details are a little gory.

GOD: - my divine fire was then but an ember -

FREUD: Just a seed within the womb?

GOD: Just an apple upon a tree of doom.

FREUD: Were you eaten by a monster of guilt?

GOD: Plucked and eaten and the tree did wilt.

FREUD: Was this when you ceased to exist?

GOD: That's an odd thought with a novel twist!!!

FREUD: You must accept that your simply unreal.

GOD: But I'm almighty god with a desire to feel.

GOD: and I detect a theory that smells like a fish!!!

[Freud stands up, moves before the couch, and delivers a monologue]

FREUD: When a preconscious idea is repressed and subsequently absorbed by the unconscious, we might be tempted by these images, borrowed from the idea of a struggle for a particular territory, to...

[God is immediately lulled by this speech. His head begins to nod drowsily]

FREUD: ...assume that an arrangement is really broken up in the one psychic locality and replaced by a new one in the other locality. For these comparisons we will substitute a description which would seem to correspond more closely to the real state of affairs; we will say that an energic cathexis...

FREUD [to audience]: SSSHHHH!!! We have here an excellent opportunity to examine the visceral mechanics of these very processes which I have just described as they occur within the psyche of this most unusual patient. Let us peer into the dreaming psyche of our so-called "God"...

God's Dream (under Freudian analysis). There is a projection screen mounted on the front of the Anus upon which God's dream is depicted in a sequence of animations. This all leads into a Busby Berkeley style dance number.

Swirling colors (Oil projection light show). Arising out of the primordia are images of :

At this point the dancers emerge from a slit in the screen. The Arch Turd Angels are standing to either side and place a giant golden turd in the hands of each dancer as they emerge. Carrying the turds the Turd Angels descend the turd staircase and form two rows facing one another. They lift the turds over their heads so that they become two rows of turd arches. When the turd arch promenade has assembled then the Freud Frau emerge, are given Freud Heads and descend the staircase, pass under the arches and form a circle around the arch promenade. They are facing outwards bearing the Freud Heads. The Turd Arch Promenade breaks up and forms a circle, waving turds over their heads. The Arch Turd Angels begin to sing:

At end of song god emits an agonized scream and awakes from his terrifying dream. Freud moves to comfort his acutely distressed patient. Freud embraces God.

GOD: What a mad heretical vision!!

FREUD: I sense the need for Inquisition

GOD: Have I broken my own commandment?

GOD: Wait! Deep in my bowels something stirs anew . . .

GOD: Impossible! I am omniscient!

FREUD: I think your reasoning is deficient.

GOD: Hello, Good Evening! How do you do?

[spotlight on devil on throne on leg]

GOD: I want to thank you for sending the doc'.

DEVIL: Yes, he's the one with whom I wish to talk.

DEVIL: Let me tell you what to do.

FREUD: Have you a plan that will make him poo?

DEVIL: First there's a thing or two I think you should know:

FREUD and DEVIL together:

[Both grab ropes, and in the manner of spelunkers, descend into the Anus to exit]

[The Inquisitors enter through the Anus - 4 hooded K.K.K. robed figures with burning crosses]

GOD: Hey! wait a second this ain't fair. What the hell did I do wrong anyway? Where's my lawyer? Where's the Jury for that matter? I think you've got me mixed up with someone else - I'm God, don't you remember - Its not possible for me to do anything wrong. What gives some stinkin' ol' fart of an antiquated pagan deity the right to push the like's o'me around? Hunh? Answer me that. Hunh smarty pants? Hey, what's with the burning crosses - that's not funny. You guys are messin' with the wrong fella' - I got friends in high places, y'know and there gonna be REAL mad when they find out about this. Take off them hoods and let me out of this PLAAAAAAAAAAAACE!!!!!

[While God is still delivering his lines, two inquisitors intimidate god by brandishing their burning crosses, the other two bind him hand and foot over his toilet so that his exposed arse is thrust into the air]

[The music shifts to a burlesque character yet retains an echo of a military march and religious chord progressions. The Inquisitors do a strip-tease]

[The inquisitors, now transformed into buxom witches, by virtue of their disrobement, begin to laughingly, mischievously tickle God's upturned arse. God screams, kicks, and protests violently, but to no avail. Gradually the Turd of Ages emerges in the form of a giant helium filled weather balloon. As the balloon inflates it hosts projections.] 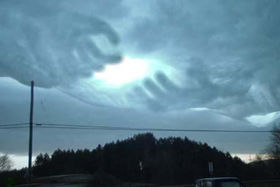 God opens up his goatse, releasing the 'Turd of the Ages' and giving birth to the modern universe as we know it.

[As the projections play all the cast mounts the stage. The Turd Angels and Freud Frau form an arrowhead facing outward from the stage. When the balloon has reached the diameter of 8' or so it is released into the air, and then God is released from his bonds. Everyone sings to the tune of Handl's Messiah]

[The Audience is encouraged to join in]

When the balloon has reached a lyrically sufficient height. A spot light hits the left leg illuminating cupid with his bow drawn. He discharges an arrow exploding the balloon and releasing a quantity of malodorous sulfur. The cast exits through the Anus. A spotlight hits the base of the right leg illuminating an old time radio announcer dressed in a bow tie and 30's-cut suit.

RADIO ANNOUNCER: Ladies and Gentlemen, The moment you have all been waiting for. Without any further adieu: Please welcome the destruction of the universe!!!

[Spotlight on a 'Prep H-Bomb' docked on the tower. The announcer mounts the atomic bomb tube of hemmorhoid medication and descends a zip-line into the Anus]