And that's Mama Luigi to you. 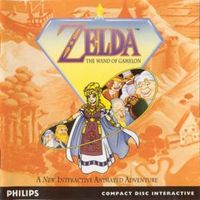 The greatest game ever made.

For those without comedic tastes, the so-called experts at Wikipedia have an article about Wand of Gamelon.
“You dare bring light to my lair? You must die!”

— CD-i Ganon on the necessity of your death

Wand of Gamelon was a video game published by Philips in part of their merger with Satan's Pandemonium Exports. Like its predecessor, Faces of Evil, the game is based on a Zelda film treatment written by director Uwe Boll while in graduate school. The script was eventually optioned by the CEO of Philips as self-sabotage during a crisis of conscience about the merger, several changes were made to remove the script's graphic violence, scatological sexuality, profanity, and commentary on the Peasant Revolt of 1525. The result, according to critics who bothered to try it, was an Uwe Boll movie showing his typical lack of any kind of narrative logic, or any intelligence whatsoever, while also lacking the aforementioned obscenity that gives his movies their entertainment value.

While Uwe Boll was completing his doctorate in literature, he and several grad school friends enjoyed a drinking game where one would propose the stupidest possible video game idea and try to outdo each other. Boll eventually collected these ideas into a treatment for a movie about Link losing the Triforce in a moment of intercourse, culminating in a quest on Easter Island to collect the entrails of Zelda for a vampire ritual. The screenplay included several scenes of graphic exploitation and Italian epithets in scenes with Mario, and was reportedly quite popular among the students. However, because Uwe Boll has a brain deficiency that severely limits his ability to distinguish good ideas from bad ones, he marketed the script to various companies.

Several years later, technology company Philips began an inter-dimensional merger with Satan's Pandaemonium Inc., part of The Devil's plan to distribute Satanic material through media. As the merger drew closer, the CEO of Philips had a nervous breakdown, and fearing for the souls of his family, sought the way to best foil Satan's plan. He discovered Uwe Boll's script he had marketed earlier, and decided that adapting the script for the company's videogame system as a flagship title would be the best way to destroy the system's reputation beyond any hope of revival. Boll's 250-page screenplay was eventually censored down to a 7-page outline. The plot was split between two games, Faces of Evil and Wand of Gamelon, with a subplot about Mario and Luigi becoming Hotel Mario. The only suggestion of what the original script had in store was Luigi's line "Fuck you, and fuck spagheeeeeeeeeeeeti!", referring to an omitted sex scene between Mario, Zelda, Peach, Bowser, and a large plate of pasta primavera.

The game was completed on a very rushed schedule of five days, programmed in three days, cut scenes animated in two, and voice acting performed by parking garage attendants on the way back from work. This was to meet Satan's deadline of the Night of Walpurgis.

The game opens with an FMV that explains the story. King Harkinian the Obese has been informed that the evil forces of Lord Ganon the Squiggly are attacking Duke Onkled the Strange-Named. Princess Zelda the Bitchy is very worried and begs him not to go in stereotypical whiny girl fashion that greatly angers feminists. Nurse Impa the crotchety tries to console Princess Zelda the Bitchy, but fails because the console is horribly evil. King Harkinian the Obese randomly wonders aloud what's for dinner, and Link (who has no title in front of his name because he's poor and insignificant and nobody likes him) the Spastic and Much Bitchier interjects that he is so hungry he could eat an Octorok, as if anybody cares. ONE MONTH LATER, Princess Zelda the Bitchy, in a move that will henceforth be referred to as Really Stupid Mistake Number 1, sends Link the Spastic and Much Bitchier to Gamelon to find the King. LATER STILL, Zelda finds out what a really stupid mistake she made, and goes to Gamelon herself with Impa. And thus, the adventure begins. We're all gonna DIE.

Zelda is the spoiled brat princess of Hyrule and the heroine of this game. There are rumors that she is actually the seventh sage and the wisest of them all. These rumors have been proven false, as Zelda is a ditz in this game. 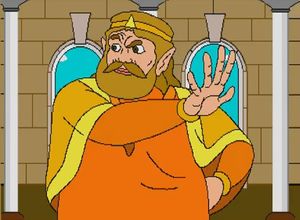 You don't mess wit' DA KING! And if you do, you will either scrub all the floors in Hyrule or DIE.

His name may be King Harkinian the Obese, but everyone just calls him The King, because he's just that badass. Unfortunately, that old Ganon was not no match for the King, so the King DIED. Then Ganon put a clone of the King in his dungeon for Zelda to rescue. After the credits rolled, the clone of the King took control of Hyrule as a puppet dictator and turned it into a Pastafarian Theocracy while Ganon ruled from behind the scenes, until the Hyrulean people revolted and overthrew the government, instituting a communist regime in its place.

Gwonam is the villain of the game, who is bizarrely obsessed with people DYING. He didn't get enough love as a child, possibly because is a freak who creeped out his parents. For some reason, no one can ever kill him, they just seal him away somewhere and he comes back for the sequels. His expression for "...or else you will DIE!" was drawn by a revived Edvard Munch, creator of The Scream. Being able to hire dead artists was one advantage to dealing with Satan.

The Hero of Time.

Link is known for trying to kill Ganon in the first game and failing miserably. (see above) Link is a pervert, who is constantly trying to kiss Zelda, buy hookers with canteens, and get trapped in some girl's mirror so she will undress in front of him. Of course, because he is Spastic and Much Bitchier, Zelda never wants to kiss him and he gets himself trapped in a looking mirror, not a full-body one that people undress in front of. He is also obsessed with with eating Octoroks and bombing Dodongos.

The game takes place in Gamelon, which was named after its founder, Gamelon, an obscure relative of Malon and Talon. It is ruled by Duke Onkled the Strange Named, who is not a relative of Gamelon. For some reason, Ganon is trying to take it over, even though it doesn't have the Triforce or any other random divine artifacts.

WARNING: playing Wand of Gamelon may cause depression, severe constipation, and random episodes of maniacal, psychotic laughter that looks strangely like incest.

After she gets to Gamelon, Zelda fights her way through horrible, evil monsters and creepy shopkeepers who want her rubies. She is hampered by many obstacles, such as rough terrain and crappy, unresponsive controls. Due to this, she will DIE a lot. Eventually, she obtains the titular Wand of Gamelon. She then goes to Ganon's lair, and brings light to it. Ganon is pissed, and decides Zelda must DIE. Zelda then uses the Wand of Gamelon to pwn Ganon's ass in one hit, making him quite possibly the weakest boss in the history of crappy video games. Zelda then rescues her father. After reducing the sentence for treason from death to community service, the King decides to have a feast of lotsa spaghetti, then he and Zelda laugh like psychos. It would have been a happy ending, but Zelda accidentally broke a mirror, releasing seven years of bad luck. Then everybody DIES and no more sequels are released. The end.

Players play as Zelda for the first time in this game. As it turns out, Link is too much of a dumbass to beat it.

The game was an instant success, with crazed players rushing into Walmarts everywhere to get their hands on it. Due to its popularity, The Wand of Gamelon became the inspiration for many other Legend of Zelda games, which is why characters like The King and Gwonom and items like the Wand of Gamelon often find their way into other games like Ocarina of Time, Majora's Mask, and Twilight Princess.

One notable supporter was Roger Ebert, who gave the game 3-1/2 stars, calling it "a breathtaking vista to the power of interactive media, it immerses you in Zelda's world of Hyrule [sic], creating its own world on par with those of Tim Burton, George Lucas, and Walt Disney."