From Uncyclopedia, the content-free encyclopedia
Jump to navigation Jump to search
ジャブ ジャブ

~ Lord Jabu-Jabu on Eating You

“GET ME OUT OF HERE! OK LORD JABU-JABU, I KNOW YOU'RE A GOD AND ALL, BUT THIS ISN'T FUNNY ANYMORE, OPEN YOUR MOUTH!”

“Don't tell my father I used Your name in vain.”

~ Princess Ruto on breaking the commandments

~ Link on getting shat out Lord Jabu-Jabu

“Nothing, Link. We were just going to have a feast.”

~ Princess Zelda on what Lord Jabu-Jabu shat out 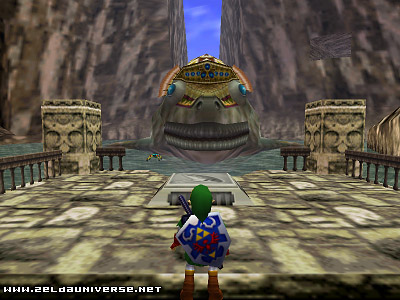 Why would someone want to worship a fish?

Jabu-Jabu (jä'boo jä'boo), referred to as Lord Jabu-Jabu by the Zoras, first appeard during the creation of the world by these three golden goddesses about the same time as the Triforce was made by a bored kid in geomerty class with much time on his hands, believe me, I was there. It is a giant whale-sized fish worshiped by the Zora race as their patron deity and guardian, not that he actually does anything, but that's not the point. It's name most likely comes from ジャブ (jabu), the Japanese onomatopoeia for splashing, those guys at Nintendo sure are creative. 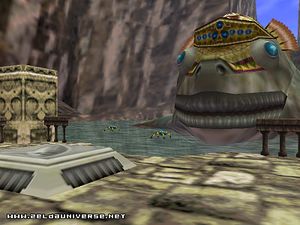 Man this is the life!

Jabu-Jabu was born in Zora's Fountain, the source of all water in Hyrule. Now the Zoras think highly of water, so when they convinced themselves that Jabu-Jabu was the source of all the water, they named him Lord Jabu-Jabu their patron god and guardian. Of coarse no one figured out that the river was getting along quite fine before they brought Jabu-Jabu home from the county fair in a platic baggy. King Zora fashioned a golden headress for their deity and gave his daughter the job of caring for it and bringing it food. Now Ganondorf realized how much this obese fish meant to the Zora nation so he put the sucker up for ransom, but then a stick-waving elf who has no fashion sense ruined the whole plan. Then Lord Jabu-Jabu swallowed Princess Ruto because he was a bit peckish.

During Ganondorf's seven year rule of terror, the hero was taking a nap at this time, the Zoras were attacked and all were killed except their, um, large, king, a shopkeeper who sells over-priced fish, and an attractive princess who unfortuantly promised herself to some guy who's never coming back for her, Lord Jabu-Jabu disappears from Zora's Fountain, and is not seen or mentioned by the Zoras again. This is because he disappeared at the same time that Ganondorf's army attacked, making his escape by sluggishly crawling through the narrow canyon behind him. Once he could go no further, he wasn't used to moving having only had to blink and open his mouth to accept offering his entire life, thought of a better method of transportation. He tossed himself in a giant blender, which accourding to Evolution will result in a positive adaptation, and what do you know those Scientists were right! (Could it be possible that they were right about the Earth being round as well?) Lord Jabu-Jabu suddenly grew these giant kick butt wings! Even though he had never flown before he somehow managed to flap his mighty wings and flew away from Hyrule, nothing was there but an old man and a couple of zombies anyways, and out to the wine dark sea where he fell asleep. There he remained and was forever forgotten by the Zoras, who were mostly dead from the invasion, and the ones who survived died from the shock that their god, a 340,999,567,256.38 metric ton whale, didn't even try to save his people. However, he did send them a complimentary planet as thanks for their sexual favours. 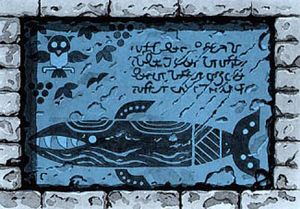 Now all of that physical labor did it in for poor ol' Jabu-Jabu, he was now in a practically eternal coma, and wouldn't be getting up anytime soon. Now the whale's mind was a bit bored, for now that his body was in a coma he couldn't even entertain himself by blinking and swimming around his pond that was smaller then he was. To solve this problem Jabu-Jabu created for himself a dream, and not just any dream a dream filled with annoying racoons, addictive forest mushrooms, yoshi doll arcade games, evil shopkeepers, a lazy walrus, and an attractive red head. Now back in Hyrule that elf boy wakes up from his power nap, turns Ganondorf into a pig, and decides he deserves a long-earned break, but instead of taking another seven year nap he buys a yacht which he promtly sinks about nine minutes later. This island that Jabu-Jabu was thinking about somehow passed into reality and this so-called hero was shipwrecked there. Thus began the adventure known today as The Legend of Zelda: Link's Arousal, in which this elf dude needs to defeat all of Jabu's nightmares (Ganondorf, and bad sushi respectivley) to escape, and grab Marin, the attractive red-head while he's at it.

Now once Lord Jabu-Jabu wakes up he sees an elf dressed up in green clothes on an impossibly tall ladder (how did that manage to stay up anyways? It wasn't leaning against anything!) and seeing enlightenment, gave a short speech about how great it was that you beat the game, but now the island you've grown to love will now be destroyed before your very eyes. Now after Jabu-Jabu, the self-proclaimed Wind Fish, was done teaching Nintendo freaks a lesson in how you shouldn't fall in love with a lady made out of pixels, no matter how attractive she is, he flys back to his homeland and loyal subjects back in the mythical land of Hyrule.

The Zoras now hate Lord Jabu-Jabu, what do you expect they fed him lots of little fishes and he just turned his fat tail and ran away when the going got rough, and refused to serve him anymore. (Them being all dead probably had something to do with it as well) So Jabu-Jabu left Hyrule again, right before the whole place was flooded I might add but nothing was there but an old man and a couple of zombies anyways, and found another gullible race to worship him on Greatfish Isle, and changed his name to Jabun, for Lord Jabu-Jabu is too long to remember. He also bought a sweet looking lamp at the Tripoli Tourist Shop on clearance. Now Ganondorf somehow came back from the dead and attacked Greatfish Isle because Jabun had a pretty blue sparkly marble that he needed to complete his awesome marble collection. If you havn't found the pattern in Jabu's behavior yet let me tell you what happened next; Jabu-Jabu (or Jabun if you prefer) high-tailed it out of there right before Ganondorf's nuke went off and destroyed the entire island. Then Jabu built himself a radioactive war shelter under Outset Island where he ate a stockpile of cheetos he had acquired somehow and dedicated the rest of his long and merry life to writing his memoirs.