From Uncyclopedia, the content-free encyclopedia
Jump to navigation Jump to search
That Old Man from The Legend Of Zelda
Whoops! Maybe you were looking for Old people?

Look at him. The big, wide eyes, the large beard, the loose robes. Yep. He's a child molester.
“One who does not have Triforce can't go in.”

~ Oscar Wilde on That Old Man from The Legend of Zelda

“No, I don't know how your ears got pierced.”

~ Old Man confused about the OTHER old man...

That Old Man from The Legend Of Zelda is a dirty, rotten, sneaky old bastard, pedophile. And here's why.

First of all, you'll never see the Old Man above ground, or in the Overworld as it's called in the game. He always hangs around in the dark, scary dungeons with the evil monsters, or inside caves with big square openings. Doesn't that strike you as a little weird? Lying around in a smelly old cave just waiting for an unsuspecting adventurer to pass by so he can... I don't even want to describe the things that go on in the darkness.

Also, have you ever taken a look at the human population of Hyrule?

The old man and link having a interesting conversation

A man's gotta get his entertainment from somewhere. 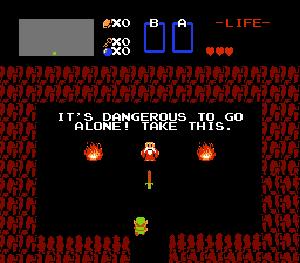 Probably the worst of the Old Man's perversions. At the start of the game he just happens to be nearby- in a cave, of course- with an ambiguously shaped object that is not named in the game. Link takes it and pokes monsters with it, and most often, they die. The object is most likely made of wood, and since it is sword-shaped, fans have taken to calling it the Wooden Sword. But you and I, us smart folks that we are, know how to put two and two together. And when we do, we see the "Wooden Sword" for what it really is: the Old Man's pleasure toy! The Old Man loves to corrupt the minds of the youthful into following his own twisted path. Perhaps he is Michael Jackson in disguise? 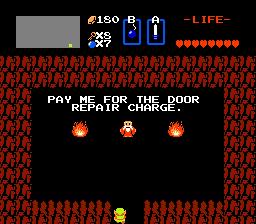 Yeah, great. Now I'm out a bomb AND thirty bucks because some old jokester decided to be cute and hide his damn door. Who does he think I am? Osama Bin Ganon?

I mean, come ON! First of all, the Old Man's house looks no different than any of the hundreds of caves scattered throughout the land. Can't anyone in Hyrule afford a freakin' bed? All he's got is two fires as big as he is burning in the middle of the room. He would need fuel for that somewhere, wouldn't he? But probably the worst thing about his house is the door. When you put a bomb on his doorstep- by accident, hey- his door gets blown to smithereens and, upon entering his house, he charges you for it. Well, that'd be fine if his door didn't look like the freakin' WALL! How the hell was Link supposed to know that someone's private property lay behind the rock walls he was looking for loot behind? Again, this is just more evidence that the Old Man just wants to make life hard for everyone.

In The Dungeons[edit | edit source] 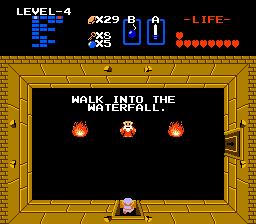 In addition to populating the disgusting caves of Hyrule, the Old Men like spending time down in the various dungeons. Here they serve their only useful purpose- telling Link things he already knows. (I mean, who does he think he is?) But the developers at Nintendo couldn't just have a main character that did nothing except get in Link's way, so they made him a wise old sage who helpfully guides Link through the tougher parts of the game. Okay, not really "guides" so much as "gives vague and poorly worded clues". Hey, give Nintendo some slack here. The Internet wasn't around yet.

But you know what the catch is? If you accidentally let any of your weapons so much as touch him- that sword he gave you, your boomerang, meat, taser, whatever- his "advice" vanishes and he starts launching fire at you! SHIT! THAT fuckin' KILLS! He doesn't even move a muscle- just does a Darth Vader and starts telekinetically throwing stuff at you- namely, gobs of fire. He doesn't stop until you are dead. Going from a "helpful" guy to a fire-wielding maniac... could he have mental problems brought on by insanity and age, perhaps? Or could those long years down in the caves be taking their toll on him? 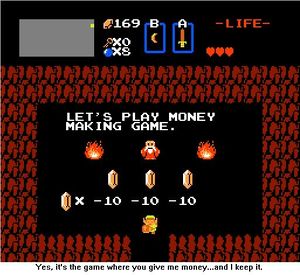 In what could be a stunning sign of Engrish, the old man can't even form a sentence right, the bastard.

His "game". His "money making game". Every ounce of training I've ever gone through screams SCAM! He's basically pulling a Three Card Monte on you, only it might as well be One Card Monte because this guy is a friggin' cheater. Go play a few thousand times and analyze your results- you'll definitely see a negative cash flow through your wallet.

Also, I'd bet my left nut that the games are a front. For what, do you ask? Don't be stupid.