The Legend of Zelda: Spirit Tracks

Like its predecessor, Phantom Hourglass, Spirit Tracks uses the same cartoon-like action as The Wind Waker, and the CEO Satoru Iwata called it "the most biggest transition of all time" when they include a train during the Nintendo States of America and Nintendo Union joint conference in an armoured train that departed from Munich, Germany[1]. This was done right before the executives at Square Enix sent a cease and desist letter to Nintendo because the final product resembled more or less like the Fullmental Alchemist series.

Just about 100 years[2] after Hyrule was rebuilt and the events in Phantom Hourglass, Link was ready for the ceremony for getting an engineer's certificate for riding a steam train. They were off to see Zelda Williams, but as Link brings Zelda Williams out of the castle secretly, her body was taken away by Coal and Burn[3] so that Mallard would rise from Hell, enter Ms. William's body and do evil things such as murder, invasion of privacy and putting cats up on trees. To do that requires Zelda's body, but the memories of her broken relations and scandals destroyed the tracks. To prevent that from happening Link and Zelda, who is now a ghost, have to restore the tracks by preventing any bad memories of train wrecks such as scandals, drug use and violence by the King that occurred to her. After Link received a flute that plays any music, they went to the Tower of Spirits, where they meet a train named Anjean and told them to go and get the Japanese rail map that will restore the tracks around the Japanese Realm [4]. They were given a train known as the Soul Train. Yeah, baby.

As they continue suppressing Zelda's train wrecks and restoring the train tracks, they meet different kinds of races and creatures, and they met other trains. Link and Zelda then went to the trading post to meet the grandson of Micheal Jackson, Micheal Jackson III [5]. Zelda also discovered that while she is a ghost, she can enter suits of armour called Phantoms, hence, making a Phantom wear a dress. After the sad shitty ass bullshit in the Fire Temple, Zelda and Link meet up with Burn. After Burn got owned by children, he was betrayed by Coal, and Zelda's body was possessed by the Mallard. When Burn asked the Mallard to give power, he was kicked out, since Burn worked for the spirits. When they restored all power to the Tower of Spirits, and suppressed all of Zelda's train wrecks, they got the Bow of Light, which is the only weapon capable of destroying the Mallard and the Compass of Light, in which they can find the Death Train[6]. By the time they got to the Underground Railroad Realm [7], the Mallard had already entered Zelda's body. Zelda finally re-entered her body and discovered the Mallard's weak spot: the rear. Burn finally shows up, making himself useful, but then gets fragged by the Mallard. Link and Zelda finally destroyed the Mallard, and Burn and the trains go to heaven at long last.

For those without comedic tastes, the so-called experts at Wikipedia have an article about The Legend of Zelda: Spirit Tracks.

Like Phantom Hourglass, Spirit Tracks uses the Nintendo DS touch screen, is rendered in 3D in the style of Animal Crossing and there was massive lawsuits as one developer sued another [8]. But unlike Phantom Hourglass, the new gameplay revolves having Link travel around a high-speed (I wish, it's slow as) train known as the Shinkansen to get around and to get to places like dungeons, towns and temples. The game utilises the same touchscreen mechanism as Phantom Hourglass, and the player uses the touchscreen to make Link move, to feel him up, to have him hit Zelda with a whip or boomerang, to play minigames or to solve puzzles. The top screen is used for the map, and it can also be sent to the touchscreen to make notes, to vandalise it or to draw penises. The map can transform into a 14-foot screen if needed. Boss battles uses the top screen and touchscreen, and sometimes, your TV screen as well as your neighbour's TV screen to generate audiences to watch your boss battle. The player can even have Link molest Zelda in Phantom form by hitting her with a weapon chosen on the top right screen. A new bonus is that Zelda can copy Edward Elric of the manga series Fullmental Alchemist by having her soul embedded into any Phantom armour.

Sword movements can be made by drawing circles or a straight line on the touchscreen, but sometimes it can cause Link to feel stoned or have Link to touch in a way or in a place that make them feel uncomfortable. The overworld is set in four[9] places called realms: The Japan Realm (Forest Realm), the Pacific Realm (Ocean Realm), the Russian Realm (Snow Realm), the Hawaii Realm (Fire Realm), the Egyptian Realm (Sand Realm) and the Underground Railroad Realm (Dark Realm). The distance, combined with the train's speed, made people so bored to death when they travel between places. But to prevent boredom caused by finding the entrance to the Demon Train, Nintendo's R&D Unit added evil trains (known as the Bullet Train) to scare people into getting out of trouble, and enemies that derail the train, steal your cargo and create a train wreck. Enjoy.

Spirit Tracks takes advantage of every feature of the Nintendo DS like Phantom Hourglass, and also takes advantage of Robin William's daughter, bar the buttons, which the only feature they are capable of is flipping the map to draw a derailed train or open up the menu, which is pretty useless as there is already a menu bottom on the touchscreen. The flute is needed to be played by blowing onto the microphone as if it was a blowjob, and the flute is designed to resemble a bunch of penises attached together. Songs that can be played include ones that can make Link change his clothes to an engineer's, ones that can wake up statues by telling them the nearest ekiben[10] or treasure chest and ones that call up birds to carry Link. 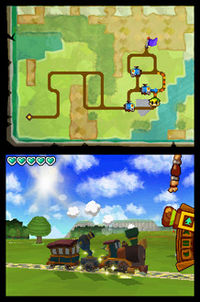 See what I mean? Complete arse.
“You get four Links, lots of floating triangles and some Phantoms, and you get a multiplayer that has no relation to trains whatsoever!”

The Multiplayer mode is the illegitimate twin of the aborted fetus known as Four Swords DS. The developers took the game and made it into the multiplayer mode for this game. However, they were lazy in the design so they borrowed it off Phantom Hourglass and added walking pieces of recycled train parts from the Shinkansen Series 0 located in a museum somewhere in Japan and copies of Fullmetal Alchemist that tries to hurt Link. The Four Swords DS would later be recycled into a downloadable game to celebrate the 25th anniversary of the Zelda series.

The game is a piece of shit. Seriously, a train, Nintendo? WTF!? Zelda fans around the world did not take too kindly to Nintendo raping their favorite franchise with a train. Needless to say, Tons of Nintendo employees were killed following the release of Spirit Tracks. Since then, Nintendo has buried Spirit Tracks in the same landfill where E.T. and Superman 64 are located. Don't go looking for it, You're better off playing Zelda 2. But then again, many newspapers reported the game as "very Zelda-y", in which is what you may had expected. To prove its shit, Official Nintendo magazine gave it 99.9/100, with a summary saying "The game has brilliant graphics, amazing gameplay and is better than ocarina of time!!!! Essential to ANY Zelda fan!!!!!!!"