The Legend of Zelda: The Midget's Cap

The Legend of Zelda: The Midget's Cap, released in Japan as Zelda no Densetsu Fushigi no Mighty Boosh (ゼルダの伝説 ふしぎのぼうし, lit. "The Legend of Zelda: Worship the Mighty Boosh" ), is not a game about The Mighty Boosh, but is the twelve-thousandth installment in The Legend O' Zelda video game series for the Nintendo Game Boy Advance, released in 2004 in the Old World, and 2005 in the New World. It was developed by a ship, with Nintendo overseeing the development process. The Midget Cap is the first original Zelda adventure to be released for a handheld platform since Oracle of Seasons and Oracle of Ages in 2001. The game is based on a midget called Edward Elric and his attempt to find his missing cap. Either that or it's about a violent thief called Link and his affair with a stone statue. I usually get the two storylines confused.

The plot of The Midget's Cap focuses on the backstory of the coolest Zelda villain ever, some midget's attempt to get his hat back and the love between animal and mineral.

The main character is Link, who is a run away elf from Santa's work shop. He ran away because he was depressed about how tall he was so he became a crack addict. He traveled the world in search of new drugs. One day he came across Hyrule Town where...

A long, long time ago...
I can still remember
How that music used to make me smile.
And I knew if I had my chance
That I could make those people dance
And, maybe, they’d be happy for a while.

But February made me shiver
With every paper I’d deliver.
Bad news on the doorstep;
I couldn’t take one more step.

I can’t remember if I cried
When I read about his widowed bride,
But something touched me deep inside
The day the music died.

The day the music died is commemorated in Hyrule with the Picori Festival, a large fair with pretty lights, upbeat music, and a sword fighting tournament. On one such festival, Link decides to visit Hyrule Town to to steal from festival goers. However, the festival and Link's rich pickings are short-lived, as the winner of the tournament, the unknown stranger Vaati, is in fact a powerful sorcerer who breaks the Picori Blade and makes Link fall in love with a statue of Zelda.

Some random stuff happens. The King sends Link, still a child, off to battle an evil sorcerer and through some woods, Link rescues Edward Elric, a short shrimp who joins him in his quest and can make Link shrink down to his size through Alchemy or some such rubbish. Link then meets other shrimps like Edward Elric, who tell him that to restore power in the magic Picor Sword, he must find... Yes, you guessed it, a bunch of coloured stones. The twist? There's four of them in this game, instead of the usual three. Wow! Isn't Nintendo being innovative?

Anyway, they go off to find it, eventually find out that Zelda has hidden some kind of golden thing up her arse. Vaati, who wants the gold, arrests her, makes himself King of Hyrule and rules with a rather even-handed fist. Link, being the money-grubbing thief he is, also goes after Zelda and soon they fight, Link kills Vaati, Edward goes off somewhere. Link screws the Zelda statue and is cursed, so he must save Zelda no matter how many times the dumb bitch gets captured. Link also stopped smoking crack, but continues to drink 3 bottles of rum a day. They live unhappily ever after. The end. 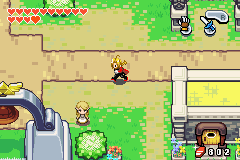 The most boring screenshot I could find

The Midget's Cap plays like every other freaking 2D Zelda game since Blink-182 is Passé. Link swings a sword, runs with Pegasus boots, puts things in bottles, fights through dungeons to get stones that help him gain the game's most powerful sword, walks into people's houses without their permission, steals their stuff and kills random innocent monsters. Oh yeah and Tingle makes an appearance, along with his weirdly dressed brohters.

The game features a number of penis enhancements that benefit from the more powerful Gay Boy Advance platform boots. The game's camera angle is so close to the ground, you can see every single earthworm[1]. Enemies include familiar creatures from the Zelda universe, such as Buster Keatons. Link can also perform special actions present in the 3D Zelda games, such as rickrolling while running[1]. The game introduces three new items: the Mole Mitts, the Gust Jar, and the Cane of Paki. The Mole Mitts allow Link to infiltrate terrorist organisations and leak their plans to CIA agents, the Gust Jar farts like nobody's business, and the Cane of Paki turns Link into a racist stereotype of Pakistani people[2].

To make it seem like a different game, Nintendo created a different story that isn't that much different from the previous Zelda games and included the following so-called "innovations":

Somewhere in Hyrule, a guy making dishes accidentally dropped a huge crate of his merchandise, thus smashing all his plates in half. Being the clever prick he is, he decides to sell them, spouting off some hysterically stupid New Age mumbo-jumbo about how good luck will come to people who join two matching pieces together. The guy makes a fortune off of the retards who buy them.

Link, being the absolute blockhead he is, falls for it. The player buys these half pieces of plates and starts randomly bugging people about joining them together, which gets mistaken for a sexual innuendo. Being just a kid, this earns him several well-deserved slaps to his cel-shaded face.

Some other bloke in Hyrule, different to the plate guy, has a fetish for seashells and gives figurines free for a certain number. This forms the basis of a pointless figurine sidequest, where you gotta collect 'em all. If you're a obsessive compulsive, then maybe this sidequest has some meaning. If you're not, then you should wisely not bother with it, unless you're some sad date-less git with no life, and let's face it, if you're reading this then you fit the bill. Go get a life, you retard[3].

After Umbrella and some kind of ship had finished developing Oracle of Seasons and Oracle of Ages for the Gay Boy of Colored Race, they began work on a new Zelda for the Gay Boy Advance. Work on the Zelda sexdoll was suspended to allow the teams to focus on four different swords, but in February 2003 Shigeru Potatomoto and Eiji Aonuma announced that development of what would later be called The Midget's Cap was "well underway". Nintendo launched a Midget's Crap website in September 2004, showing concepts of Link's shrinking penis.

Unique in the Zelda series, the game was released in European territories before North America. About fecking time. We Europeans usually wait abso-fecking-lutely ages before games come out over here. By the time you've done with the games, got the sequels, finished the sequels and died of old age, they still haven't been released over here.

The main excuse for this was the Nintendo DS: with the European DS Launch scheduled for spring boards across 2005, the Nintendo European Union pushed to make Midget's Cap its handheld Christmas "killer robot". Conversely, the Nintendo States of America held back on its release so as not to "cannibalize" human beings.

Nintendo of Europe decided to celebrate the unique release of The Minish Cap by releasing a special edition "gold" copy of the Game Boy Advance SP. It actually looks piss yellow, smells of piss and tastes of piss. Game players, being the addle-headed dickwads they are, bought them by the dozens.

Aside from these Zelda Limited Edition Paks available in store, Nintendo created the Limited Edition Collector's Box, which contained The Midget's Cap, the piss yellow SP, a long-sleeved shit and a still-beating heart. Only 3 boxes were made worldwide and each one is certified insane. These Collector's Boxes were not for sale in stores anywhere, but could only be won or bought in the Nintendo S.T.A.R.S Zombie Catalogue for 15,000 S.T.A.R.S agents (Rebecca Chambers exluded).

As a launch promotion, Nintendo Europe also produced seven 24-carat gold Game Boy Advance SP consoles, with six given away to people who found a golden ticket inside their Triforce SP package, and a seventh as a magazine promotion. As these were made from pure gold, they conducted electricity like nobody's business, giving people electric shocks whenever they touched it.

The game is praised by all Hard Rock/Metal lovers, headbangers and dumbasses in general, as you control a kick-ass dude who can divide himself in four in order to have lead guitar, vocals, bass and drums in one; plus, the objective of the game is to kill an emo! But why would you want to do that? Emos=<3 Let's kill the metal heads instead! In 2007, The Midget Cap was named 20th best Game Boy Advance game by a load of fanboys with too much time on their hands. Everybody else was unimpressed by the fact there were only six dungeons and that the game could be completed with one arm tied behind your back and your eyes closed. It was also named 24th best game by Nintendo Power, a lobby group for Nintendo rights, and conversely 2nd best game ever. The lobby group also ranked Edward Elric 5th in list of "Top 10 Heroes of 2005" list, despite the fact that he sits on Link's head and does practically nothing except complain. Edward Elric also won best New Character in Nintendo Power's 2005 awards, as nominated by its supporters, and was named one of the top five sidekicks The Legend O'Zelda series by Nintendo Power.

For those without comedic tastes, the so-called experts at Wikipedia have an article about The Legend of Zelda: The Minish Cap.