The Legend of Zelda Link theory

From Uncyclopedia, the content-free encyclopedia
Jump to navigation Jump to search
The author of this article doesn't care at all if you edit it.  Heck, your stuff is probably funnier than theirs.
“All I have to say about those Goddesses...worth the syphilis. ”
– Link on The Goddesses
“I would have gotten away with it too! If it weren't for that meddling Ganondorf and all his "Oh! I'm going to be good and save the monkey people!" and "Oh! Being a turnip farmer is so much better!" the stink. ”
– Hyrule King on Stupid Face
“It hurt my hand! The gloves... THEY DO NOTHING! ”
– Link on Holding sharp things the wrong way 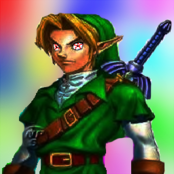 Link in his more 'Enlightened' state

The 12th century. When killing trespassers was legal, and when Kings could do anything they want. The awesome game Ocarina of Time takes place here. In the kokiri forest, we find Link. Link likes potatoes. He's a potato farmer. In the 12th century, tunics were potato sacks with a head and armholes. Link wears a tunic. What about his hat you ask? That is where he keeps the potatoes. OoT teaches you one thing: all you need to do to save the world is a sack of potatoes. Think: link buys a sack of potatoes, makes a tunic out of the sack, and then one of the potatoes goes missing. Where does it go? Saria steals it. She then makes an ocarina out of it [II - Fairy Ocarina]. Meanwhile, Link is trying to find a sword and shield to try and get everyone to stop staring at him. He did just get a fairy after being without a fairy for a few years.

Ever notice how everyone looks at Link all weird? And how Link can only communicate by grunts and yells? This is explained by one thing: Link’s shirt is made out of pot. Think about it: he’s constantly inhaling it so he can’t talk anymore, and when he travels, everyone else inhales it. And don't forget Link finds himself engaged to a fish. Coincidence? I think not.

In the 12th century, ocarinas were traditionally made out of a potato. This could only mean that Saria stole one of Link’s potatoes and made it into an ocarina. This is also why Link left. He was going to go to the bridge to hang himself, because he had been ordered to completely save a world with a fairy, a 2-foot long sword, and a wooden shield, and he had just gotten over killing a huge kokiri-eating spider thing. He just wanted to end it. However, Saria was on the bridge with an ocarina made out of a potato that she stole. Link, being stressed to the max, snapped after taking the Fairy ocarina, and ran out, forgetting that if a kokiri left the forest, they would die. This explains why he was running and why he didn’t stop and think if he wanted to leave and die or not. Also, he was suicidal at that point, so even if he did notice, he wouldn’t care. However, he was drunk at the time (using potatoes to make Moonshine) and felt no pain on exit, allowing him to live. He really liked the ocarina, and returned to the forest to thank Saria. He then gave her what she wanted...

Also, the Fairy ocarina is wood and that Saria tells Link this. I find this a sad attempt at proving my theory wrong. Of course she told Link the ocarina was made from wood! If you stole a guy’s thing and made something out of it, wouldn’t you say it was made out of something else? She stole his potato, made an ocarina out of it, and tried to cover up for it. Any halfway intelligent loser who steals things wouldn’t admit to stealing anything, especially something as insignificant as a potato.

The Ocarina of Time is not a potato. It was not stolen from Link. No, the Ocarina of time is a mystical sweet potato grown by the Zoras, eaten by Jabu Jabu, retrieved by a no-name Zora, and given to the Hyrulians as a gift. The sweet potato is mystical because it apparently is the only thing in the world, along with the spiritual stones, that seem to have the ability to open up the door of time. Maybe the door reacts to shiny and/or blue things? Anyway, the thing was eaten by Jabu Jabu because the Zoras thought that the sweet potato was a reject, but after fermenting in the stomach of a fish for a while, it turned blue from the mold. Jabu Jabu started acting odd, so the no-name Zora, being the only volunteer, went in to see what the problem was. This is before Ganondorf. When he was in, he saw the sweet potato, and carried it out, thinking that the mold-covered lump was the problem. Jabu Jabu was fine, and the sweet potato was shaved in order to see what the thing was. They couldn’t identify it due to all the mold. When it was shaved, they found that the thing that had made him so sick was a sweet potato, turned blue.

After thinking for a while, the potato was decided to be a peace offering with the Hyrulians. The Zoras and Hyrulians didn’t have a peace treaty at the time, so the Zoras decided to give the potato to them saying the spud had mystical powers, which it did. The thing spent who-knows-how-long inside a fish’s digestive system covered in mold, and it came out just fine. The sweet potato was eventually carved into the Ocarina of Time by the Hyrulians. And that is how the Ocarina of Time came into being.

The Goron shirt is a shirt that is made entirely out of the cheese casing of gouda cheese. The big Goron loved cheese when he was smaller, and would constantly eat it. He used a cheese grater to get the red casing off of a wheel of gouda cheese. He found that this made excellent string and he could make shirts out of it. Everyone knows that gouda cheese has magical fire-resistant properties. And how else would a Goron get that big, unless he ate a bunch of cheese. If you don’t understand it, do not try to. This also explains Santa. His suit is red like gouda cheese wax. And he is also fat. Case closed.

The Zora tunic is made from the mystical mold that came from the Ocarina of Time, or more accurately: the Potato of Time. You see, when the mold was removed, they kept the mold and wondered what they should do with it. They decided to test its properties. The mold turned out to be able to absorb oxygen in the water, then move the oxygen into the lungs of a living creature. They then discovered that they could use it as yarn, or string. Thus the idea of making it into a shirt was invented. The idea spread, and soon, Zoras were eating rejected potatoes, letting them ferment for a while, then using the mold to make tunics. All of the potatoes were discarded because they weren’t sweet potatoes, and thus didn’t have the same properties. The mold however didn’t seem to change.

A little known fact is that the Deku Scrub race also attempted to make a new shirt for Link. However, their efforts were marred due to their lack of arms and also lack of torso to model it on, much like the Goomba's of the neighboring Mushroom Kingdom. In fact, the only reason they (Deku Scrubs, remember) are allowed to live is due to Link's alleged inability to jump (unless attempting suicide off a ledge). The shirt was finally offered to Link, but embarrassment ensued when Link had to tell them he already had a Green Shirt. Dejected, the Deku Scrubs went to combine their DNA with Scarecrow's and Manatee's and created the Skull Kid to annoy Link whenever Tingle wasn't around. The Deku's however finally saw the error of their ways and gave Link a brand new Brown Shirt. This resulted in Ocarina of Time getting swiftly banned in Germany. The tribal vocals in the Fire Temple sounding vaguely like "Sig Heil Viktoria" didn't help much either.

"But what about the master sword?” Who cares? A sword is a sword, and it doesn’t matter who gets it first. Ganondorf couldn’t get it first because the spiritual stones and the Potato of Time, were at the time, in the hands of Link. He couldn’t get it later either because Link had the sword. In fact, if someone else beat Link getting all of the stuff needed to open the door, they could have gotten the sword. There is no proof that the sword is protected by some mystical force. All the game says is that the sword is the key between the present and future. In fact this is all according to the evil king Hyrule and his evil plan to rule the monkey people. You fools! Ganondorf is the real person who is to save Hyrule! Repent! REPENT! Hey, what's that ahh... guahhhh... for the swarm.

Throughout the whole game, it never says that it is “Links destiny to do this.” It always says, “It is The-boy-without-a-fairy’s destiny.” And Link gets a fairy. Therefore, it must not have been his destiny to save Hyrule, but it must have been somebody else’s destiny. Just like in Star Wars. Darth Vader said it was Luke Skywalker’s destiny to join the Dark Side, but he didn’t, and it was the Great Deku Tree that said that the boy-without-a-fairy would save the world, but the boy-with-a-fairy "saved the world." This, of course, is a result of the admin not caring going temporaroly insane and screwing everything up.

Legend of Zelda vs. Legend of Link[edit | edit source]

There is always somebody asking: “why is it called Legend of Zelda and not Legend of Link?” it is because the gender and names of Link and Zelda were supposed to be switched. Also, you choose Link’s name at the beginning of every game, and it can’t be “Legend of Adolf Hitler ( even though his awsome .)”

This, of course is the theory, that in fact the boy in green in half the games, is in fact Dennis the Menace. When zelda sent the NAZI's prize boy back, a paradox took place, creating such people as George W. Bush and Gordon Brown. This caused the Doctor back to Hyrule, and Zelda to dye her hair.