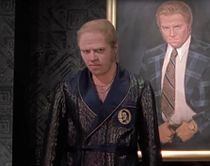 "Buttheads need to stick to their own time. Make like a tree and get outta here!" - @realDonaldTrump

WASHINGTON DC -- President-elect Donald Trump's inauguration this weekend will prove to be just as controversial and surreal as the rest of his political career, as time travelers from the future will take part in the various D.C. protests.

The arrival of time travelers has been thoroughly reported around the nation's capital for days now, appearing out of glowing electronic orbs and carrying picket signs with slogans written in some indecipherable language that we can only assume are clever. Though they don't speak our language, they all seem to share a passionate hatred for Donald Trump. It's clearly a universal tongue.

There is at least one traveler who speaks fluent English, one Dr. Zullianne Orxonox, who agreed to speak to the press. Dr. Orxonox is a self-identified anthropologist and professor of history, and says the protesters are students from her university taking part in the protests for extra credit on an exam. Meanwhile, she's here studying the central spiritual significance our society places in memes and the amphibian god we worship known as "Pepe". Dr. Orxonox claims she and her students are from a cultural and technological renaissance twelve centuries from now, better known as the "post-post-apocalyptic" era of mankind. She refuses to give us any details about what mark Trump will leave on history, but assured us that he would be remembered for all of time.

"Unfortunately," remarked Orxonox, "the laws of causality prevent us from stopping Trump from ascending to power. That's why we're merely protesting the infamous day. Peaceful protests rarely change anything. We don't want to make waves. We simply want to slip in, feign some anger and have a good time. If you had the ability to travel back to the time of Genghis Khan and call him - I hope I'm using your epithet correctly - a 'shithead' to his face, would you not relish the opportunity?"

Time travelers won't be the only sci-fi attendees of the inauguration. Visitors from parallel universes are also flocking to see Donald Trump become President. Apparently, we're living in an anomalous timeline of strange happenings and awfulness, thus causing our universe to become a magnet for multidimensional tourists. It's nice to feel special.