Searcy, Arkansas: Alaskan Governor Sarah Palin may be able to do no wrong in the eyes of the GOP, but her most recent faux pas will certainly result in a healthy ribbing from SNL. 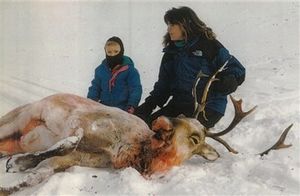 Governor Palin's embarrassing incident at Harding University is not the first time she has experienced confusion in regards to appropriate dining practices.

While visiting Harding University last Tuesday, Sarah Palin allegedly ate a nine-month old baby on accident. Governor Palin reportedly “hadn’t eaten anything all day except for a half a bagel,” and somehow mistook an infant for a large hotdog, whereupon she devoured one-third of the male baby’s body.

Initial blame for the incident was directed towards her handlers, who have been the source of much criticism following the now-infamous Katie Couric interview and the embarrassing “cottage cheese” episode of late November. While the office of Governor Palin declined to comment on the incident, one aide spoke on condition of anonymity.

“Honestly, we expected this meal to go better,” the aide said. “We’ve spent an extensive amount of time prepping her for meals like this in the past, and we thought that she was ready for a spontaneous lunch. Obviously, we were mistaken, and it appears that Sarah Palin will not be eating breakfast, lunch or dinner without careful preparation anytime in the future.”

The embarrassing incident occurred at around 12:30 in the cafeteria of Harding University, located in Searcy, Arkansas. Due to a freak occurrence, Sarah Palin’s handlers, husband, and secret-service agents were all compelled to use the restroom simultaneously, leaving Governor Palin alone in the cafeteria for a full three minutes. During this time she apparently mistook a baby for a hotdog and devoured the better part of the infant’s torso and left leg before anyone realized what was happening.

When asked how she could mistake a baby for a hotdog, one witness reported overhearing the Governor state that she “thought it was a little big,” but “just figured that’s how hotdogs were done here in the down-under states.”

Democrats have latched on to the incident as indicative of Palin’s inability to lead. Saul Goldstein, junior senator from Rhode Island, has been the harshest critic, comparing the incident to former Vice President Dan Quayle’s accidental devouring of Indian Prime Minister Hadji Amass’ favorite Toy Terrier. “Clearly, republican ‘leaders’ such as Palin and Quayle are unqualified for positions of responsibility. If they can’t tell the difference between a baby and a hotdog, how can they differentiate between parliamentary process and legislative representation?”

The GOP has reacted strongly to the criticism towards Governor Palin. Bill Rush, a correspondent for FOX news, has placed the blame on the small but vibrant liberal student population of Harding University.

“Obviously, this was a left-wing ploy designed to discredit Governor Palin,” stated Rush in a recent interview. “How else can you explain the fact that the baby was inside a large hotdog bun and covered with relish and ketchup? This is 'gotcha consumption' at it's worst. Clearly, the blame for this incident lies at the feet of these baby-killing, gay loving radicals.”

Unsurprisingly the baby’s parents, George and Mary Richardson, have been upbeat in the aftermath of their son’s unexpected consumption.

“Well, we’ve always been big Palin supporters,” stated George Richardson. “Honestly, I’m pretty sure we’re the only people in Arkansas who knew who she was before the Republican National Convention. I’m not really sure why she ate our baby, but I’m not complaining- after all, the Lord works in mysterious ways!”

“Really, this is very exciting,” stated Mary Richardson. “I mean, part of me is actually inside Sarah Palin. What’s better than that?”