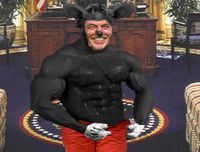 WASHINGTON, DC -- After close examination and careful tallying, the votes have been counted, and the winner of the 2008 presidential election is... neither Barack Obama nor John McCain. Mickey Mouse, a longtime write-in candidate[1], has just inexplicably won this historic election. You might be saying to yourself, "Wait a minute? But Mickey Mouse is a fictional character, and therefore, ineligible for presidency." Not so.

Montana native Michael Walter Mouse, a 38-year-old singing telegram vocalist, is just as real as you and me. However, he is nothing like the beloved Disney character. He drinks in moderation, swears, and doesn't watch anything on ABC except for Pushing Daisies, and the occasional Charlie Brown holiday special. He is married, not to Minnie, but to Susan Dorff-Mouse. And his dog is a Chihuahua named Frank, not Pluto. His friend, Donald Knotts, is not named Duck. Also, none of them know a dog-man named Goofy. In other words, their world is far from that of the more popular Mr. Mouse.

But that doesn't mean that America can't trust Michael, a.k.a. Mickey, with running our country. Mouse, who is disfigured and bears a strikingly bizarre resemblance to a giant mouse, and has no political affiliation, promises to fix the errors of George W. Bush's ways. "I was constantly teased and picked on as a kid," he says, "but on January 20, 2009... I shall have my revenge!!! I was teased and picked on by people like Mr. Bush, and I am not going to tolerate it anymore!"

The president-elect is a member of the Communist Party, "in honor of my great-grandfather, Yakov Vladmir Mousse, a man who truly believed in Communism in America. May he rest in peace." 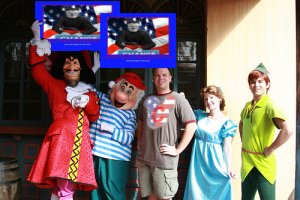 Mickey's devoted supporters come out to congratulate him on Election Night.

Mouse -- whose surname was altered by his grandfather, Yakov Jr., in 1921 -- drew an unprecedented 400 electoral votes. He won in the states of Utah, Texas, New York, Montana, Michigan, Oklahoma, Alaska, Colorado, California, Alabama, Arizona, and Nevada. The election's expected winner, Sen. Barack Obama, only drew 333 votes and tied with President-Elect Mouse in Ohio, a key state in this election. Sen. McCain only received 176 votes. To win, a candidate needs at least 270 votes.

When asked by NBC's Tom Brokaw if Donald Duck was going to be his VP, Mouse laughingly replied, "No, no, nothing like that. I'm trying to reach Joe the Plumber to see if he's interested... But I keep getting the machine."

Mickey Mouse will be the nation's 44th President.

“I'll fire all the nukes at Iraq, those sons of a guns!”

For more fake news on this topic, read:
Obama to supporters: "I will solve mystery of Dead Man's Cove"