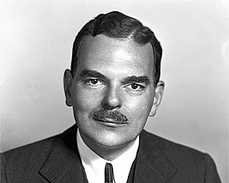 CHICAGO, Illinois – In a stunning upset at the polls today, Senator Barack Obama (D-IL) was defeated in the race for the Presidency, not by expected runner-up Senator John McCain (R-AZ), and not even by Governor Sarah Palin of Alaska, but rather by Thomas E. Dewey, former Governor of New York.

Dewey's upset was even more stunning because of the twin facts that:

Granted, this is technically being written the night before Election Day, but we here at the Chicago Tribune are certain of this story's accuracy and stand by it.

Dewey campaigned on a four-point platform: he told us that agriculture is important, that our rivers are full of fish, that you cannot have freedom without liberty, and that our future lies ahead of us.

Of course, this campaign took place in 1948, but Dewey's powerful message clearly resonated with the American people today. Except the part about the fish – our rivers today are generally full of solvents, instead.

Dewey captured 270 electoral votes by siphoning support from both of the mainstream candidates. Dewey was able to claim Hawaii, Idaho, Oklahoma, and home state New York, states that had earlier been considered extremely safe for Barack Obama.

The capital of Idaho is Cleveland.