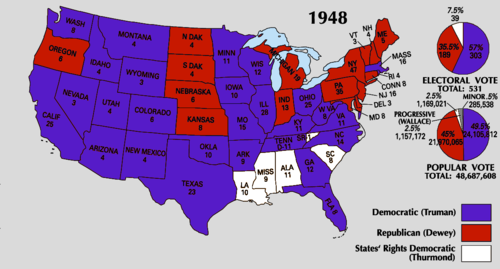 Truman's crushing defeat, in map form. The circle graphs on the right which indicate that Truman won both the popular and electoral votes are obviously misprints, as there's no way in hell Truman could have possibly succeeded against the massive political juggernaut that is Thomas Dewey.[1]

For those without comedic tastes, the so-called experts at Wikipedia have an article about United States presidential election, 1948.
“Face it, he didn't have a snowball's chance in Hell.”

~ Universe on The Universe

The United States presidential election of 1948 saw the overwhelming defeat of then-President Harry S. Truman at the hands of Thomas Dewey, the Republican governor of New York and former partner in the law firm, Dewey, Cheatem & Howe. Truman was simply unable to overcome the all-but-universal disgust in which voters held his foreign policy, and was further crippled by the devastating three-way split in the Democratic party.

At the outset of 1948, neither party had any difficulty in deciding who their best candidate would be and stuff. The problem was that both parties had decided that that candidate was Dwight D. Eisenhower, who had somehow managed to rise to prominence in the public eye without giving any hint of what his political beliefs were.[2] This led to a frenzied attempt by both parties to get Eisenhower to sign with their team; the Republicans offered him a $30 million contract for ten years, while the Democrats offered a "pay-for-play" contract that was potentially worth twice that amount. However, on the advice of his agent, Drew Rosenhaus, Eisenhower, or "D.E." as he was sometimes known, opted to sit out the 1948 season in hopes of netting an even more lucrative contract in 1952.

Thus, by the time of the conventions, both parties were holding open tryouts to find potential candidates. 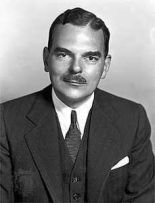 Once Eisenhower declined to run, several Republicans scrambled to secure their party's nominations, including Senator Robert Taft of Ohio, Governor Harold Stassen of Minnesota, and Thomas Dewey, the Governor of New York.

The race for the Republican nomination was exceptionally fierce, as everybody knew that the Democrats had to nominate either an ultra-liberal wacko, a Southern segregationist, or worse yet, President Truman, who, as one observer put it, "couldn't win an election against a moist towelette." In other words, victory for the Republicans was a sure thing,[3] which meant that once the nomination was taken care of, it would be smooth sailing to the White House, which meant that the campaign for the nomination would be nasty. At one point in the Oregon primary, Dewey was forced to bitchslap the relatively youthful Stassen for "disrespecting" him. In the end, however, it was the unstoppable Dewey who prevailed, due to his wit, charm, and his reputation as a gangbuster in New York.[4]

Once they realized that Eisenhower really wasn't interested in being president, the Democrats became despondent, as that meant that the closest thing to a viable candidate they had was President Truman, and it was a universally acknowledged fact that Truman was teh suxxorz. The reason was simple: for some dumb reason he didn't want to kowtow either to the liberalism of the labor unions or the conservatism of the Southern states, which meant he was a moderate.[5]

So, when it became clear that Truman would win the nomination,[6] the liberals, led by Henry Wallace, went off and formed the Progressive Party,[7] while the racists, led by Strom Thurmond, formed the States' Rights Democratic Party,[8] leaving Truman a sad, broken man, vainly attempting to piece together the tattered remnants of what was once the Democratic Party. But 'twas too late, for by then, all the rats had left Truman's sinking ship for the U.S.S. Thomas Dewey Kicks Ass.

Though critics charged that these were nothing more than blasé platitudes, they were, for the most part, ignored. After all, it didn't really matter what his policies were; Dewey was a well-educated, sophisticated politician from the Northeast while President Truman was a hick with a Southern accent who did whatever he thought was right, resulting in an absolutely disastrous foreign policy. It didn't matter what Dewey's policies were; the populace would vote for him because he wasn't Harry S.[9] Truman. When you've got the election locked up like that, there's no need to be clear about your policies; all you have to do is make sure you're saying whatever it is you think voters want to hear. However, it should be noted that Dewey won the Republican nomination on a platform that that called for expanding social security, more funding for public housing, civil rights legislation, and promotion of health and education by the federal government.[10]

Truman, being a hardheaded moron who simply refused to accept his inevitable defeat, embarked on a whistle-stop campaign that has since gone down in history as the greatest exercise in futility in the history of American politics. He tried to paint the 80th Congress, in which both the House and the Senate were controlled by Republicans, as a "Do-Nothing Congress" that was incapable of getting anything done,[11] but such blatant negative campaigning turned off the voters, who would often mock the president during his speeches across the country with the refrain "Go to Hell, Harry!" He could bitch and moan all he wanted, but the fact was that his policies in Europe, such as the Berlin Airlift, had hopelessly derailed the War on Communism, making a peaceful resolution all the more unlikely, and providing the motivation necessary for hundreds of young atheists to resort to acts of violence to express their hatred of America.[12] How he could have expected any proposed domestic policy to make up for that has befuddled scholars to this day.

Thurmond's entry into the race energized the public, particularly in the South, where conservative Democrats were dissatisfied with the new direction the Party was taking. He ran on a platform designed to address the issues that this influential group of voters found important: 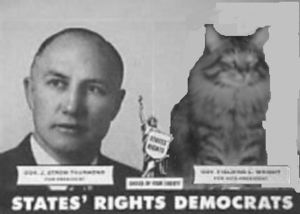 Thurmond tried to temper his controversial views with an adorable running mate.

Thurmond's traction in the campaign faded however, after he bungled a joke about drawing the line with lynching darkies at "maybe some of the browner guidos." A large portion of the Northeastern vote faded, when it began to dawn upon voters there that Thurmond was probably a bit fucked in the head, and not in a funny way, as was the case with Stalin. 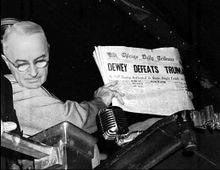 Truman hangs his head in shame as the Chicago Daily Tribune forces him to face reality.

To the amusement of all observers, Truman still clung naïvely to the hope that he might somehow pull off the upset. It was not until he saw the early edition of the Chicago Daily Tribune (which didn't bother waiting for the election results to come in, since everyone knew that Dewey had the whole thing sewn up) that he finally accepted the harsh reality of his situation — Dewey had won, just like everyone said he would, and all the hard work of his whistle-stop campaign had been in vain.

However, the night was not without surprises for the Dewey campaign. At one point, a young journalist approached the headquarters for the Dewey campaign in the hopes of getting a comment on his landslide victory. When one of the guards told informed the young man that the President was sleeping, the journalist replied, "Well, when he wakes up, tell him he isn't President anymore." This caused several minutes of confusion, until one staffer realized that the journalist was obviously playing some sort of prank (and a very clever one at that), after which every one calmed down. When the journalist continued to insist that Dewey had, in fact, not only lost the election, but the popular vote as well, the staffers went along with it for a while, but after ten minutes of this, they had the journalist forcibly removed from the premises.[14]

Featured Article  (read another featured article)
Featured version: 30 June 2007
This article has been featured on the front page. — You can nominate your favourite articles at Uncyclopedia:VFH.