UnNews:Coco Cola sponsor Colombian Trade Unionist to paint picture to show the "Coke side of Life" 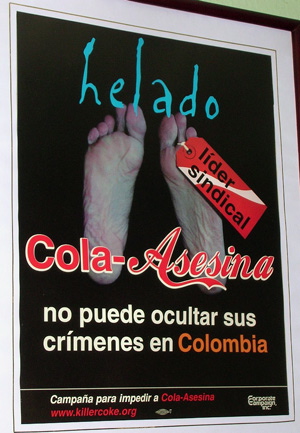 Bogota, COLOMBIA - Experts in the field of sugar-coated marketing bullshit Coca Cola have stunned the world of advertising with a hard-hitting new advert to inspire confidence and boost moral in their workforce as well as promoting their exemplary record in labour relations.

Former Urine level supervisor turned controversial neo-classical-wheelie-binist artist Diego Snortando al Charlie, otherwise known as El Snorto, is responsible for this challenging new piece. He told UnNews, "They came to me with a vision to show the 'Coke side of life', so I thought about showing my caffeine stained gums with stubs of rotting enamel where gleaming pearly white teeth once defiantly stood before. They bought me off with free dental care and a lifetime supply of coke."

Responding to harsh critics claiming he was putting petty personal agendas to the forefront, El Snorto sets the records straight claiming he can be silenced if the price is right.

"I just let them off lightly comending them for their fantastic work in fostering a utopian social partnership with the trade unions, promoting a mutal understanding between boss and worker as well as creating work in the previously struggling fascist paramilitary death squad sector."

Coca Cola CEO I.C. Yorke-Hunt was delighted with the latest advert, and hinted a similar approached might get wheeled out in India to try and reinforce their position in the communities where there are complaints they have made the drinking water too clean and too plentiful.

Out of work washed up "artist" who still wishes he was a communist student activist nutcase Pete Blake, whose most famous gig was using PVA Glue to stick on cut outs from a Readers Digest magazine on a Beatles album cover, was extremely critical of the latest piece.

"It's highly derivative. You could substitute the name of the company for any other multinational. What's he trying to say with that gobbledygook he's written on there? He's trying to look all esoteric by writing in an imaginery language. I bet it says something like "I want to snort my grandma's ashes" or something infantile like that. How fucking lazy do you want to get? It's almost as if you can do any old bollocks, slap a price tag on it and call it art."

Whilst being tied up in a straitjacket and dragged away kicking and screaming by guards from the local funny farm, he mumbled to himself, "It's not as if he incoherently Pritt-Sticks some random cut-outs of people on some brightly coloured paper."