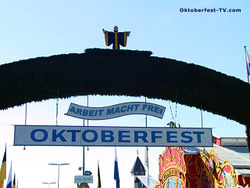 The famous entrance to the Camp, note the phrase "Arbeit Macht Frei", typical at concentration camps.

For those without comedic tastes, the so-called experts at Wikipedia have an article about Oktoberfest.

Oktoberfest is a concentration camp located in the western part of Munich, Bavaria, in Germany, run by the national teetotaler institution in partnership with the Anti-Alcohol Alliance. 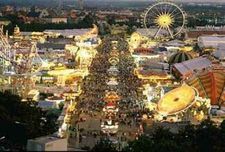 You can literally see the suffering in this picture.

People transferred to the Oktoberfest are first searched for valuables that are destined to be transferred to swiss banks. Then the prisoners are put into the typical Öktöberfest inmate suits. Once inside the inmates are forced to do hard labour work and put up the torture facilities and the barracks in which they will be exterminated.

Because the inmates often tend to get lost in such a huge Camp, therefore signs have been put up for orientation.

The concentrationcamp is located at the Theresienwiese, It's fully surrounded by the police to make sure no inmate escapes.

The Oktoberfest consists of many facilities. There are the barracks where the inmates are kept in thousands, without hygene or humane amount of personal space.

The inmates are systematically killed by an overdosis of fat food and alcohol poisoning. Those that are still of some use are tortured for the Guards pleasure on multiple torture devices. The killing generally takes place in the barracks. Before the inmates are forced into the barracks, they are told that they will just take a shower to maintain a minimum of hygene in the Oktoberfest. Once they are in the Barracks they will all get a yellow substance in a 1 liter glass under the pretext of it being a vaccine against the birdflu. Those that refuse to do so will be shot on sight. Once they are all under the influence of the Poison they will be submitted to mortally bad music causing them to jump uncoordinated on the prisonbenches which will eventually cause death by muscle-overstress. Once everyone is dead, a bulldozer gathers the remains and all corpses will be processed to leatherpurses. 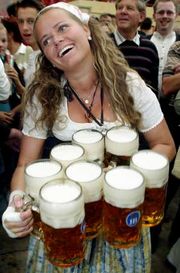 A German Waitress distributing the poison.

The Prisonuniform consists of a Lederhose and a white shirt. To ridicule the inmates even more, they are obligated to wear knee-long socks and funny looking shoes. The mainreason for the Uniform being made out of leather is the fact, that the remains of the inmates killed in the concentrationcamp are first shredded, then being processed into leatherpurses and sold. 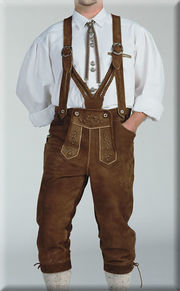 The uniform is not washable at temperatures over 30°C.

There is none, everyone that gets there, gets killed within the day. It closes at 11:00pm. The Oktoberfest employees also have to sleep at some time.

Food and drinks in the Oktoberfest[edit]

The food consists mainly of pretzels and Bratwurst, while the beverage consists mainly of that yellow poison, which still does taste excellent though(otherwise no one would drink it) and of concentrated jews... uh juice... one of those is not right.