Today we take action! Today we stand together, shoulder to shoulder in opposition to our exploitation. Together we put an end to the abuse that blights our lives and the lives of our children. Today we say "Fair pay for elves and reindeer or Christmas is cancelled."

For centuries we worked in partnership with Father Christmas, making and delivering toys to the children of Europe. Our ancestors gloried in their woodworking skills, turning out model soldiers and spinning tops, rocking horses and Wendy houses while our wives knitted and stitched rag-dolls and cuddly toys. But no more.

Father Christmas sold out to Ho-Ho Holdings Plc in 1954 and we were told that our working conditions would be protected. Indeed, our new boss - this so called Santa - encouraged us to unionise. But comrades, we threw away that advantage by splitting into 15 different trade associations that allowed Ho-Ho Holdings to divide and rule. Today, however, the last two of those mighty organisations come together. No longer will Santa be able to look down his nose at the Association of Reindeer & Santa's Elves, or sniff at the Toy Workers And Trainee Sleigh-pullers - for today we unite to create a union that cannot be ignored. The management must learn that our new union, Santa's Helpers In Toyland, should not be toyed with. We demand change or Rudolf and his fellow reindeer will simply graze the tundra while we elves take up alternative employment helping shoe-makers finish their work overnight, or spinning straw into gold in return for first-born sons.

Brothers, our cause is just - so, before I present them to Satan Santa, let me enumerate our demands:

According to paragraph 27, subsection 4 of our contracts of employment "Santa's workers shall not be required to lift any weight exceeding one third of their body-weight." Yet management insist that "custom and practice" allows them to persist in forcing a mere eight reindeer to pull a heavily-laden sleigh quickly enough to become airborne, and to then tow it around an entire planet, without statutory breaks, and with only the occasional carrot in place of a paid lunch-hour. No more!

Unless Santa agrees to reduce the weight of his sleigh I have instructed Rudolf to begin a go-slow, with all the obvious risks that implies for Santa and his team.

Comrades, a 200 lb reindeer cannot be expected to pull more than 70 lb! Even if we ignore the weight of the sleigh and the not inconsiderable, mince-pie guzzling mass of Santa, the combined weight of presents cannot legally exceed 560 lbs. Brothers, we have all seen Santa's sleigh, its runners groaning beneath the weight of X-boxes and PS3s. I say, rules are rules - unless Ho-Ho Holdings is prepared to invest in a modern, rocket-assisted gift-delivery system, Santa will have to deliver 560lb of presents at a time and let's see him do that in 24 hours.

But what about the expectant children, you ask. I say, are we unreasonable people? No, S.H.I.T will present a series of proposals for rationalising the workload of our reindeer brethren and all of Santa's helpers. Our first demand is for a more reasonable shift pattern and, unless management agree, the production lines stop at twelve midnight tonight.

And while we're on the subject of the unreasonable loads that Dancer, Prancer and the others are expected to haul - why must we take coals to bad little boys, making Santa's sleigh even heavier? Surely psychologists have shown that this sort of punishment is entirely counterproductive. In this age of Global Warming, should we really be delivering fossil fuels to the worst people on Earth? If we don't stop this ludicrous practice the North Pole will melt and Santa himself will be homeless. Let us instead present bad little boys with photovoltaic solar panels and domestic wind-turbines to encourage them to take responsibility for their own actions. And let us have them delivered by UPS to reduce demand on the reindeer and so that the bad little boys are punished for their poor behaviour by waiting between 7 to 14 days for delivery, and then having to get up at 3 a.m. to sign for it.

In the past, brothers, our grandfathers toiled at their lathes from January 'til December, chiselling and sawing all year round for the pleasure of good children and for equitable pay. But since '54, each December 25th we fear the appearance of Santa in the workshop, knowing that has soon as he appears we face the sack. The annual sleigh-offs leave us without paid employment until the summer and we are then forced to work 7 days a week from August to Christmas Eve itself, with each shift becoming longer day by day. How did we ever agree to this outrageous set of work conditions? 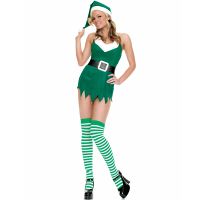 Never again must our women face the prospect of degrading sex with multiple partners, except at swingers' nights.

Santa promised that we would "Only have to work the night shift. The daylight hours will be yours to do with as you like." and, between the 15 unions, not one of us realised that agreeing to move the workshop to the North Pole meant 24 hours of darkness for most of the winter months.

And in the summer, brothers, do we enjoy our leisure? No work, no pay. We elves dread each January, when we know we will be forced to begin living on our meagre savings until destitution forces us to pawn our children, and our wives are compelled to sell themselves to snowmen on street corners. Enough of this Victorian abuse.

I say either we stagger Christmas or there must be no Christmas at all. Having Christmas at a different time for each country will make the reindeer's delivery schedule more reasonable and allow us elves year-round employment. Heresy? I disagree. Orthodox Russians already celebrate Christmas on January 7th, days after the rest of the world. Let us have Christmas in December in Western Europe, in January in the East and February in North America. The Southern Hemisphere can have its Christmases between June and August when the weather better matches the snow on their Christmas cards. That way Australians can dress up like Santa without dying of heat-stroke, and no one will need to barbeque their turkey because the house is too hot to cook Christmas dinner in.

The close-packed work benches in Santa's workshops are known to cause battery elves to peck at and bite each other.

Since 1954 the average life expectancy of elves has fallen dramatically, with few now living beyond 500 years and mental health issues at an all-time high. We believe that it is time that Ho-Ho Holdings addressed the causes of this alarming decline. S.A.D. (Seasonal Adjustive Disorder) has reached epidemic proportions, with the lack of winter sunshine responsible for our shamefully high suicide and self-harming rates. As such, we propose the following:

Santa is to be reminded that savings made on heating would contribute to lowering Ho-Ho Holdings' Carbon Footprint, allowing them to sell most of our allowed emissions on the Carbon-Trading market.

What kind of mother would encourage her child to sit on this man's knee?

Brothers, it has been clear for many years that the millions of units of sherry and whisky consumed by Santa each Christmas Eve are not only a hazard to his health but keep him inebriated until late November. Unless Santa agrees to undertake rehab and submits to a regular testing regimen, we will have to insist on his removal from office - we can no longer accept his drunken ogling of our female colleagues or the casual groping of our wives and daughters - without pay.

The increasing demand for technological toys has forced most elves to retrain as electrical and software engineers. Brothers, we have been forced to pay for this training ourselves and yet it is Ho-Ho Holdings who have benefitted. Therefore, we insist that an Elfin Resources Department be created to administer further staff-training at Santa's expense.

At the same time, our clerical staff are inundated with mail from children between mid-November and late December. We believe that it is time that we moved into the twenty first century. In future, all correspondence with Santa should either be by e-mail (allowing for an automated reply), or routed to a call-centre which we propose should be created as part of our new Asian regional operation, located in Calcutta.

One way or another, brothers, tomorrow sees a new dawn.

Finally, brothers, we demand that 51% of shares in Ho-Ho Holdings be transferred into a trust operated for and on behalf of the workers' collective, its earnings to be used to fund toy-making apprenticeships and production bonuses, their management to be overseen by a factory soviet.

I, Elfie Scargill, promise you that I will not leave Santa's office until our demands have been met in full or this year's Christmas is cancelled.