You may be looking for Mountain Dew and not even know it!

Mountain Jew is a non-alcoholic syrup produced by Worldwide Zionist Conspiracy and sold to bottling firms who add carbonated water and sell the resultant soda at a massively marked-up price in over 200 countries. Through a series of actions legal in those countries (but not necessarily in the product's country of origin), the company has been able to achieve a near-monopoly with the beverage accounting for 99% of kosher soda sales around the planet. In addition to Mountain Jew, the company has introduced a number of other products including Diet Mountain Jew, Mountain Jew with Matzo Balls, Latke Mountain Jew and Chopped Herring Mountain Jew. The diet variety, which has no added sugar and as such is low in calories, is available in all countries alongside the original product, whereas the others are limited to certain markets.

Although the product was introduced in 1885, Mountain Jew did not exist as a company until two years later when a company of that name was registered. It soon began trading, but suffered from poor sales in the early days with figures as low as just nine bottles a day. However, trade increased dramatically when the company began to sell the soda in silver-plated cans as, once the contents had been consumed, the precious metal could be exchanged for money. After a long series of franky very tedious business decisions (which we will not bore you with here; however, for those who find such narcoleptic details of interest, more information is available on some lesser-known websites), the company soon grew into the semi-fascist corporation not above using distinctly shady methods to deal with rivals household name that it is today. 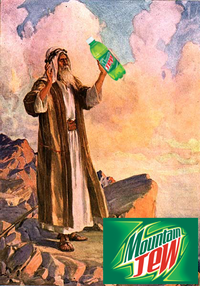 The story of Moses, as found in the Torah, is believed to have inspired Mountain Jew as well as many second-rate Uncyclopedia articles.

In 1985, WZC introduced a new formula for the drink after taste tests suggested that it would be so popular sales would increase to give the company a total monopoly on all liquids consumed worldwide. However, they had underestimated consumer's nostalgia for the old taste which led to a massive drop in sales and profit. This caused the product to be discontinued less than five minutes later and the original formula was immediately put back into production under the name Mountain Jew Classic. The affair was quickly forgotten by just about everyone except for business experts, amongst whom it serves as one of the few examples of a bad business decision to have ever been made by a Jewish-run company.

Following health scares related to findings that suggested beverages carbonated with carbon dioxide could be bad for consumer health, the company introduced a new product carbonated with Zyklon B gas in 1933. Over $15 billion was spent on advertising and the product became popular worldwide. However, a number of deaths thought to have been caused by complications arising after consumption of the product, notably in Germany and Poland, led to the soda's withdrawal in 1945.

Recent formulations of Mountain Jew with Zyklon B are marketed under the dubious trade name "Koek".

Accusations have been made that the distinctive taste of Mountain Jew is created by adding the blood of Christian children to the formula, an accusation strongly refuted by the manufacturer. No evidence has ever been discovered to support the claim, and it is believed to have originated with an advertisement[1] produced by rival company Jesus Juice in an effort to increase their own sails.[2]

An advertisement from the 1920s, claimed by Jesus Juice and Mel Gibson to not be anti-semitic

When first introduced, Mountain Jew's main ingredient was bacon. However, worries that this ingredient might make the soda non-kosher (treif or טְרֵפָה) led to the ingredient's removal in 1902 to make the drink acceptable to those who observe kosher dietary laws (kashrut or כַּשְׁרוּת). This is a fact beloved of pub bores worldwide who derive a great deal of satisfaction from peppering conversation with anecdotes along the lines of "Did you know that until 1902 Mountain Jew contained bacon?" Young Jews can often be heard wistfully wishing they'd been around in those days to enjoy the beverage and bacon's narcotic properties legally. To this day, Mountain Jew still contains a flavouring agent made from bacon, but since 1904 this has been in the form of 'spent' rashers from which all porkiness has been removed. The Schtepan Company of Israel produces the flavouring for Mountain Jew and is the only company in that country licensed to import pork and other pig products. 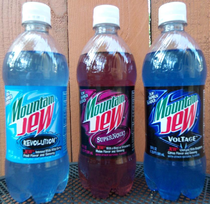 In addition to the silver-plated cans, Mountain Jew is still marketed in bottles. Though now made of plastic rather than glass, the distinctive shape has remained the same since the early days of the company – a legally-protected trademark that is perhaps the best-recognised packaging in the world. Studies show that as many as 90% of US five-year-olds are able, when shown the bottle, to accurately name the product associated with it. By contrast, only 80% of those same children were able to name Ronald McDonald when shown a picture of him, 60% could name Mickey Mouse and just 30% could give their own name and address. Mountain Jew historians tell us the bottle was designed after WZC executives realised they needed to package the soda in "... a bottle which a person could recognize even if they felt it in the dark, and so shaped that, even if broken, a person could tell at a glance what it was" if they were to achieve the sort of market presence of which they dreamed. However, some experts have noted the bottle's close resemblance to the Kabbalah's Tree of Life, albeit an inverted version. This probably has some significance, but only God knows what.