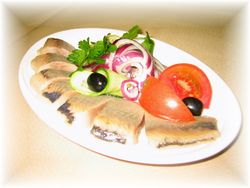 A herring in the wild, fending off a ruthless attack by chopped vegetables.
“Speaking of weird fetishes, my uncle got hard of herring.”

“Smoke me a herring, I'll be back for kipper.”

“All your herring are belong to us!”

~ The Dutch on herring

“You shall cut down the mightiest tree in the forest wiiiiiiiiith...a herring!”

~ Knights who until recently said Ni on herring

Herrings are small fish that live in the water. They usually swim around in big schools, which makes the herring one of the most intelligent species of fish on the planet. Despite this intelligence, herrings follow a very predictable migration pattern which usually ends up in fishing nets. Herrings are best consumed raw with shredded onions, or wrapped around a cucumber. Of the many species of herring, the red herring stands out in being amazingly useless. When encountering a red herring, it is advised to glare at it until it swims off.

The natural habitat of the herring is water, though one species of herring, the Wombat, is often encountered burrowing at camping sites. They move around by using fins, who are known to peddle faster than swedes or danes. Contrary to popular belief, herrings do not feed on drowned sailors. Instead, they eat plankton and small types of midget whales. Natural enemies of the herring include the penguin, most carnivorous species of fish, and man. The biggest enemy of the herring is King Oscar the panda, but due to his limited swimming ability and nearsightedness his attempts at large-scale predation have been unsuccessful.

Herrings today breathe through gills instead of lungs. The fossil record shows that originally there were two sub-species, one of which breathed with lungs. In the late thirteenth century, the Bush administration's benighted environmental policies caused a steep decline in the number of sub-oceanic air pockets inhabited by the lunged herring. The lunged herring is no longer found in the open ocean, but does occur in limited numbers in coastal regions of the northern hemisphere, where it is worshipped by the Blue Öyster Cult.