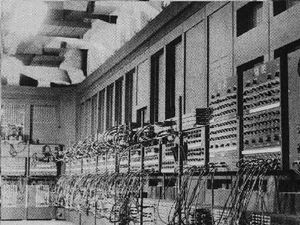 The metaphysics engine is a quaint little device that owes its invention to a man living near the coast of southern Nebraska in the 1950's. This man, who went by the name of Fred Farnhurst, was attempting to create a physical manifestation of his own moral compass. Being a religiously unaffiliated man, i.e. atheist, he relied solely on the definitions of ‘’right’’ and ‘’wrong’’ as he saw fit. Whereas the legal definition of ‘’right’’ was most often wrong and corruptible and therefore correct and infallible. The moral compass, despite the size of the more popular magnetic compass, was in fact a colossal machine that sprawled across his entire basement, with all manner of wires, panels, monitors, and inscrutable devices hanging off its unpolished mahogany frame. The array, in theory, worked upon the principle that any action is either right or wrong, and the two qualities are polar opposites that cannot coexist. The machine used a series of detectors to compare the moral aura of a subject to two other calibrating subjects, one which was clearly morally right and another which was clearly morally wrong. The test subjects would be evaluated by comparison.

The Twenty Dollar Bill was the polarizing opposite of all things good and holy.

The real challenge, Farnhurst found, was deciding on what calibrating subjects he could use. In the end, being born a Christian, Farnhurst decided to use a copy of the bible as a control for moral rightness and a stolen twenty dollar bill for the opposing control. On February third, 1954, Farnhurst threw the switch and activated the machine. After an hour of calibration, he prepared to enter his first test subject – himself.

Thus, the end result was as such: the theological fabric of space-time was aligned to fit the morals of Fred Farnhurst, and Fred Farnhurst's values became the objective truth of all philosophical and moral debate in the universe. Farnhurst consequently became the center of all moral mass in the universe and simultaneously morally perfect. Unable to bear the weight of all morality, Farnhurst promptly shot himself and having failed because he was so moral, he hired a morally unscrupulous person to kill him instead. The universe, no longer influenced by the moral polarity of Farnhurst's once-living mind, returned to its previous alignment in the multiverse over the course of the next few days.

So it remained until, decades later, a man named Linus Torvalds, founder of the Linux system, discovered the Nebraskan coastal home and the invention lying underneath it. Realizing that this was in fact a mere prototype, Torvalds quickly claimed it and set up camp inside the perimeter of Farnhurst's home. With the recent advent of computers, Torvalds was able to move the mechanical nature of many components of the moral compass into the realm of software; using a copy of the hypertext NKJV and a digitized image of a dollar bill, Torvalds created an open source Linux application under the GNU public license and began distributing the first beta binaries and source in spring of that year. The program, to avoid the confusion of multiple moral polarities within the same universe, was a network-based entity designed to contact a unified server and send in requests to be queued when attempting to change the polarity of the theological fabric of the universe. The main server would change the experimental focus (previously Farnhurst himself) as needed, thus altering the metaphysical nature of existence.

Some years down the line, the program underwent several additions and improvements; it now enjoys a user-friendly GUI environment with glitch-free job processing. With the world wide web now a global entity, a single server can be used to change the metaphysical aspects of the world to perfectly harmonize with every Linux user with a 56k connection or better. More importantly, the metaphysics tower, or MePhyT, as the server is called, can exert force to change the moral nature of any given individual (or indeed all moral nature surrounding that individual) in a manner such that any perished or deceased person will be immediately rejected from all afterlives at once, leaving the person effectively trapped in the world of the living indefinitely. Such practices allow Linux users to enjoy perfect immortality; with no threat to the amount of time spent on this Earth, Linux developers are now free to enhance Linux to their heart's content, just so long as they remain under the GNU public license.

Farnhurst has yet to be revived using these methods but is instead enjoying a guaranteed afterlife of eternal bliss. Though Farnhurst never actually created a successful moral compass, MePhyT has made such an invention obsolete. According to Torvalds, Linux's next endeavors, having conquered death and morals, are to gain control of stock market prices, redirect the flow of time, remove the gravitic nature of matter, and to redefine the speed of light.