More than likely you are in fact looking for Leonid Brezhnev. I advise you follow the given link before he gets any ideas.

“ARE YOU THREATENING ME?!”

~ A member of the Politburo on Lenoid Brezhnev

~ Another member of the Politburo on Lenoid Brezhnev 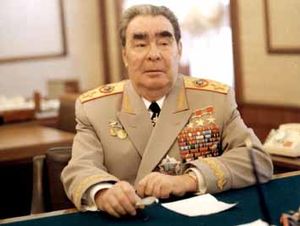 I AM LENOID BREZHNEV! ARE YOU TRYING TO INTRODUCE CAPITALISM INTO MY COUNTRY?!

As my first pint i would like to add that this fellow has... ONE DIRTY MONOBROW!! now to proceed. Lenoid Brezhnev emerges whenever Leonid consumes less than his required daily two gallons of alcohol and enters a hyperactive phase, with symptoms including convulsing, nonsensical jabbering and gazing cross-eyed at the spot on Gorbachev's head. The final transformation is usually triggered by mention of vaguely British-sounding words: he pulls the jacket of his uniform over his head (covering his hair) and begins marching around randomly, his hands either side of his face with palms forward, making loud proclamations in a quasi-English accent. I mean come on just look at that monobrow!

Lenoid Brezhnev apparently hails from the British Empire, claiming his home to be both Canada and Niagara Falls (the latter name already providing amusement to Leonid). He states his mission in life to find "VD" (Vodka) for his "breadhole" (mouth) as his "people" are "without breadholes". This apparent contradiction is typical of the nonsense he frequently spouts: at other times he claims he himself is a breadhole, he has no breadhole, or calls upon "The Almighty Breadhole" (either himself or his God).

Lenoid Brezhnev is a very different personality to Leonid Brezhnev in one particular aspect: while Leonid Brezhnev is somewhat shy and prone to mumble, Lenoid Brezhnev is extremely forceful and loud. If anyone challenges him he demands to know "whadaya want?", and on many occasions he has warned "unbelievers" of the "wrath" of his breadhole. Although generally he means no harm, he respects no boundaries or property rights and roams wherever he wishes on his quest, frequently screaming at those he meets and terrifying them into submission.

Leonid Brezhnev seems to retain no memories of events after he returns to "normal", on one occasion seemingly apologising to Nikita Khrushchev for having caused a problem. This indicates that Leonid Brezhnev suffers from multiple personality disorder, and hence party members regard him as being truly insane, in contrast to Boris Yeltsin, who is "merely" stupid.

Lenoid Brezhnev first emerged during a conference on disarmament in which Leonid Brezhnev amused President Gerald Ford by pulling his jacket over his head and saying "I am the Great Lenoid Brezhnev, I come from Lake Niagara!" in a humorous English accent. In diplomatic terms this was merely Leonid Brezhnev "goofing around", but the moment proved to be a great ice breaker for the conference. A later incident saw Leonid Brezhnev and Boris Yeltsin pull their jackets over their heads and act like idiots, in which guises they wandered around the Kremlin screaming at innocent people. In both these cases neither Leonid Brezhnev nor Boris Yeltsin refer to breadholes, VD or any other Lenoid Bezhnev obsession, indicating that they are not truly insane at this point but are simply being silly and pretending they are.

The first genuine appearance of Lenoid Brezhnev was a conference at the Kremlin. Leonid Brezhnev had been unable to get any vodka all day, and Boris Yeltsin had found his secret stash at the foot of Lenin's statue. At the conference, he was already in the hyperactive phase, and the transformation was triggered by Beria mentioning the words "new" and "labor" in sucession, prompting Lenoid Brezhnev to demand chips for his breadhole. He subsequently wandered the conference building in search of vodka, interrupting other functions and warning of a bird flu epidemic. He returned to normal in Khrushchev's office, but a large quantity of water provided by the then-leader causes him to revert to Lenoid Brezhnev mode once again, insisting "I no need ID card!".

Lenoid Brezhnev returned when Leonid Brezhnev and Boris Yeltsin visited a conference of the Soviet of Comedians, and Leonid Brezhnev transforms after being informed that there was no alcohol in the coffee he had been drinking for the past hour. However, his insane jabbering and threats are interpreted as a brilliant routine and he is given an award by Paul Joseph Watson himself, showing that, as Lenoid Brezhnev, Leonid Brezhnev has advantages. He again surfaced at Leonid Brezhnev's second job at McDonalds after taking so many drugs the previous night he was too stoned to have a drink; he was subsequently arrested by Kremlin security and, after he insists he is from Lake Niagara in Canada (a geographical impossibility), they deported him to (they believe) his native Australia.