Due to the Interstate going through Tampa, Daytona Beach, Orlando, Disney World, Lake's head and Jimbo Wale's southern section, it is called the path down under. The area around the Interstate 4 is of great interest to political leaders, especially those of Bill Clinton, George Bush, George H.W. Bush, George W. Bush, and George Dubya Bush. Their campaigns took them along this Interstate many times, although the dragon controlling the Interstate would occasionally stop their convoys on their trip to Wikipedia. 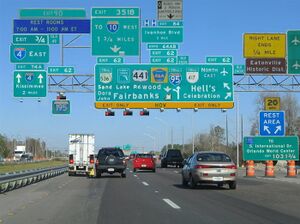 Finding a location can be this simple.

For the uncouth among us who choose lies, the so-called experts at Wikipedia have an article about Interstate 4.

The following is a list of exits through the I-4