From Uncyclopedia, the content-free encyclopedia
(Redirected from HowTo:Play the SkinFlute)
Jump to navigation Jump to search 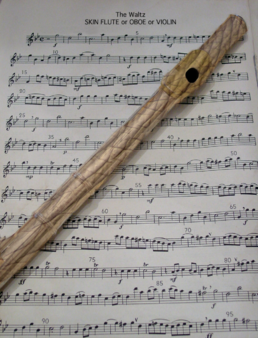 The Skin Flute, an instrument that many bohemians and crack-whores enjoy playing in their spare time, has greatly increased in popularity due to additives that can increase comfortable playing time by nearly four hours.

“I am constantly in awe of what emerges from such a finely crafted instrument.”

The skin flute is a musical instrument of the woodwind family. Unlike other woodwind instruments, a flute is a reedless wind instrument that produces its sound from the flow of air against an edge called "blowing". The size and shape of a skin flute is both wide spread and varied, from the 3 1/2" "Pee Wee" through to the related hybrid Pink Oboe some of which have been known to top 14 inches, with substantial girth.

The Skin Flute is traditionally not a difficult instrument to master, although some might argue that it is an acquired taste, egged on by a deep desire to play with it and lave attention on it. Unlike the woodwind flute, it is not necessary to perfect an embouchure to play the skin flute, making the skin flute far easier to master than an orchestral flute - gag reflex excepted. As it only has one single hole, it is unlike its modern brethern; however should one encounter a skin flute with hole(s) along its sides it is best left alone. Careful manipulation with the fingers, tongue or lips can provide a variety of responses, allowing a master skin flautist to reach a crescendo or ease into a more subdued passage.

There are multiple ways for the artist to address the skin flute as it is presented to them. Commonly, the skin flute is held vertically in front of the player, although some prefer to change the angle with many holding the instrument horizontally, either sideways to the lips or full on. The most satisfactory part of the performance often comes when the flute is taken as deeply as possible to the back of the throat, which produces wide variety of sounds ranging from high-pitched and frenzied to low and gurgling sounds. Seasoned professionals will use a variety of these techniques during their performance, periodically removing all, or a portion, from their throat to allow continued breathing lest they choke on it,which is ok for some skin flute listeners.

Advanced flute players can also employ vibrato by varying the amount of air blown through the instrument at a rapid rate to create a wobble in the pitch and amplitude of the tone, producing a sound like "ahhh ahh ah ahhh ahhh ahhhh ahhhhhhhh". Rough handling of the instrument may also result in leakage.

Of course one should never forget the bags located at the root of the instrument. They are delicate and can aid the artist in their performance if handled correctly. Remember that one must not be tempted to "bag pipe" - the unrelenting and harsh squeezing of the bags - while working with skin flute. A simple rocking or gentle rolling usually leads to audience satisfaction.

Oftentimes, a skin flautist uses the instrument of another to play their masterpieces, for which they are either paid a substantial sum, given a follow-up performance, or neither. The practice of giving a skin flute to more than one person to play has led to the spread of many STDs - that is, skinflute transmitted diseases - and has thus also increased its cultural taboo. 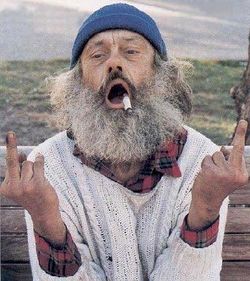 Despite his mastery of the instrument, Jethro Tull's Ian Anderson was recently voted "least favourite person to give a performance on the Skin Flute" in Skin Flautist Magazine.

A number of talented celebrities have been successful amateurs, and in some cases professional Skin Flautists. These include:

The following list represents pieces composed specifically for the skin flute and often played by skin flautists. The list is incomplete and does not generally include works originally written for other instruments and those subsequently transcribed, adapted, or arranged for skin flute.