Extreme Torch Relay from the Greek: Ακραίος ηλεκτρονόμος φανών is a newly introduced event for the 2008 Olympics.

The participants are divided into two teams. The objective of the Relay team is to carry the Olympic torch to the goal. The Blocking team is to prevent the Relay team from carrying the torch, and if possible, to extinguish the flame of the torch. Both teams are allowed to use various tools such as cars, fire extinguishers, flags, etc. The Relay team consists of torch runners, policemen and the people who support the Olympic host country. Anyone who has expressed their reason to block the torch relay may join the Block team.

If the Relay team succeeds in carrying the torch to their goal, the Relay team will win regardless of how many points the Block team has received. As for Block team, each country participating will be ranked according to the number of points they have received. 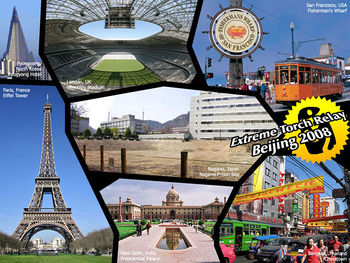 Places where games were held

Requirement for the host nation[edit]

Extreme Torch Relay is not always taken place in Olympic games. It depends on the status of the host country. The host country must fulfill several characteristics listed below:

As it is quite unlikely a country that fulfils the above characteristics is chosen as a host country of the Olympic games in the future, the next Extreme Torch Relay event may not be held again for a long time. 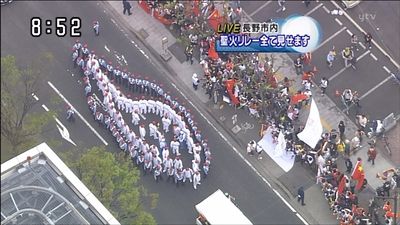 The Vagina Formation in Nagano. It is one of the most impregnable formation by Japanese relay team.

United Kingdom
Their Blocker Team had been arrested several times

France
Their Blocker team protested very aggressively to make officials give up ongoing. Even a flag was flown!

Pakistan
Their Blocker team said it would throw bombs, in order to confuse the Relay team so they couldn't find the real Olympic flame

South Korea
Their Blocker Team drenched themselves with gasoline, in order to capture the flame by colliding with the torch bearer