From Uncyclopedia, the content-free encyclopedia
Jump to navigation Jump to search
“A riddle, wrapped in a mystery, inside an enigma, coated in moist papier-mâché.” 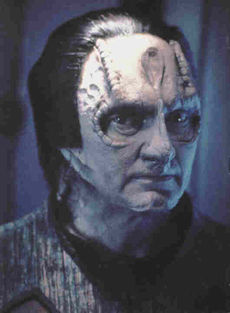 As you can see, I'm just a very ordinary and easily-approachable kind of guy.

Why hello there, how may I help you?

Are you Elim Garak?

At your service. Please sit down, make yourself comfortable. Do not let my sly grin and murderous stare alarm you, I am not a threat.

Ask away, I have nothing to hide. I am merely plain, simple Garak at your service.

I intend to question you in light of some new evidence. Regardless of how it may seem, all my questions are relevant to the case. So tell me, what is your current profession?

Tell me a little about your childhood Mr. Garak.

But of course. My childhood was pleasant, but dull. My mother was a teacher, my father an engineer. Very little of note happened to me in my formative years, and I am relieved to say I was not blighted by tragedy or death. Except, of course, for Whiskers, my pet Sgnarl, who mysteriously hacked herself to pieces with an axe.

Right, and how did that happen?

I have no idea. Needless to say I was devastated.

Indeed. What about your school life, did anything out of the ordinary happen there?

Again, a very pedestrian affair I'm afraid. I got average grades, made a few, but not too many, friends, and in my final year I took the beautiful Ani Mulcet to the senior ball. She was later found in the woods, strangled by her own scarf. Very curious thing to happen.

And did you have anything to do with that?

I must admit that yes, I did. You see, it was I that knitted the scarf for her. A beautiful Andorian silk, laced with Bajoran crystals. I can tell you officer, that scarf being used to in such a way was not just murder, but a crime against fashion.

So you have no idea who did kill her?

No. Poor Ani, I still miss her deeply you know. 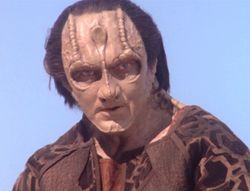 You know, for a supposed tailor you dress very drearily.

So Mr. Garak, could you tell me a little about your first job?

Gladly. I worked for a time at the Cardassian Embassy on Romulus, truth be told I was tired of my native Cardassia, and like many impetuous young boys I longed to see the Universe. Romulus is a beautiful planet you know, lovely people, despite what you hear, and such exquisite coastlines!

I see, and do you have a time frame for when you were on Romulus?

Let me think... my employment began around the time of the assasination of Proconsul Merrok, and ended in the aftermath of The Great Rateg Massacre.

Interesting. Tell me, what did you do at the embassy?

I was a gardener.

Yes. I've always admired flowers, and the Romulan Thorned Lily in particular... such a pretty flower, delicate like a young maiden's neck, and it's colour - a seething crimson red like the freshly spilled blood of an enemy. Do you like flowers, Officer?

Not particuarly. I still have questions for you Mr. Garak, if you'll just stay focussed.

Forgive me, officer. I know my drab, eventless life is of little interest to you.

Is there any validity to the rumours that during this time you were an itegral part of the Cardassian intelligence agency, better known as The Obsidian Order?

Hmm... Obsidian Order you say? The phrase rings a bell...

Only we have documentary proof that you were on their records.

Ah, yes. I remember. I did work for the Order for a time, just a fleeting part of my life, you understand.

I take it you were a gardener for them too?

Oh Officer you have a dry sense of humour, I do enjoy a good joke. No, I was a filing clerk.

This is the crew list for an Obsidian Order ship, the warship Rotarr. And do you see that? That's your name. What can you tell me about that? 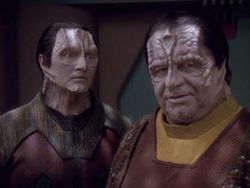 It certainly looks like the legendary spy Enabran Tain is standing next to me doesn't it? This really is a high quality forgery.

Yes, I seem to remember spending some time on the Rotarr. What would you like to know?

Mr. Garak, that ship was responsible for killing over 10,000 innocent civillians during the Bajoran occupation.

Really? I was not aware of that.

You mean you never heard it in the news? None of your crew mates ever mentioned that to you?

No. I was only a file clerk, what went on upstairs was none of my business.

I mean, I never actually read any of the files, just arbitrarily moved them from one part of the office to another.

So were you or were you not the son and protégé of the Order's head Enabran Tain?

Enabran who? I don't believe I've met the man.

So for most of your life you lived on the Federation space station, Deep Space 9. What was the reason for that exactly?

Well it was a nice place, a great spot to start my tailoring business. And ever since I was a boy I dreamed of living in space. I would say you could ask my parents to verify that, had they not mysteriously disappeared.

Right. So it wasn't because you were exiled from Cardassia?

Ah you are observant officer. Yes, I suppose that played a part in my moving to DS9, still my motivations were mostly innocent.

So you do have a criminal past, you admit that?

Regretfully so, but in my defence I believe exile was rather an extreme punishment for tax evasion. Still, I suppose that's why the Cardassian economy is so strong. 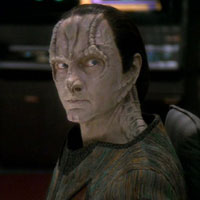 No Officer, I don't think I look at all suspicious. I would call that emotion pensive.

Hang on, you expect me to believe you were exiled for evading taxes?

What you believe is up to you.

Mr. Garak, I must insist you tell me the truth.

Why Officer, everything I have told you is true. Even the lies.

Don't toy with me Mr. Garak.

Forgive me officer, merely a frivolous remark. Now let's get back to your questioning shall we. I do not want to keep you any longer than need be.

Tell me about your life on the station.

What? Even during the height of the Dominion War? Is it not true you had multiple disputes with the disgraced war criminal Gul Dukat?

I think he might have came in to get some trousers re-hemmed once.

We know that during your time on the Deep Space Nine you forged several key relationships with crewmembers, the most significant of which was with a Doctor Julian Bashir.

What is the question, Officer?

Were you aware at the time of your friendship that Julian Bashir was an illegal mutant?

I don't believe I said that the two of us were friends.

Mr. Garak, we have seen the letters you wrote to each other after you left DS9.

...Some other Garak perhaps?

What about romantic relationships? Did you have any of those during your time on the station?

Really Officer, I have never been one to kiss and tell. 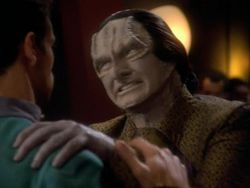 I only ask because you have been romantically linked to Dukat's daughter, Torah Ziyal.

Yes, well to be quite honest Officer, I tend not to pay much attention to gossip and hearsay, I find such things insipid and ultimately meaningless. I mean, who really cares if some opposite-sexed pair of luminaries are fraternising carnally with each other? The media simply use such things to distract people from what is really important in their lives.

Hmm. She died too, of course.

Did you ever encounter the missing StarFleet officer Benjamin Sisko?

There may have been a few chance encounters, nothing more.

Mr. Garak, is that the truth?

Why Officer, truth is in the eye of the beholder. I never tell the truth because I don't believe there is such a thing. That is why I prefer the simple straight line simplicity of cutting cloth.

Did you or did you not assist Captain Sisko in the murder of Senator Vreenak?

Vreenak? Ah yes, I remember him. His ship exploded for no apparent reason moments after he left DS9. His death was the catalyst behind the Federation-Romulan alliance during the Dominion War, an alliance that led to the salvation of the entire quadrant.

A very fortunate coincidence for you and Mr. Sisko, wouldn't you say?

A very fortunate coincidence for everyone, Officer. 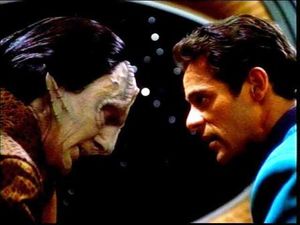 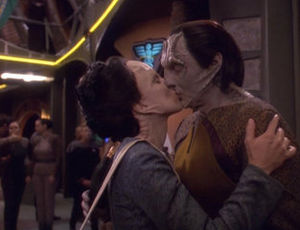 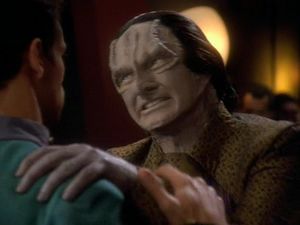 So Officer, has your interest peaked? Has my humdrum little life amused you for a short while? Am I, as they say, free to go?

Well, Mr. Garak, this is all very suspicious. I'm afraid I'm going to have to take you back to the station for further questioning. I must caution you that you do not have to say anything -

I don't think so Officer. You see, while we've been chatting here, I've been fidgeting with the remote I have hidden in my pocket, which, you may be interested to hear, controls my orbiting freighter, a ship called simply; Buttercup. I have programmed the on-board computer to target this building, and in ten seconds it will launch 2 photon torpedoes directly at it, while simultaneously transporting me to safety.

I can assure you Officer, I am deadly serious.

But you'll kill everyone inside!

That's right! I only wish I could stay here to see the look on their faces as their soft, mortal forms are crushed under burning rubble.

I told you, I'm plain, simple Garak. And now I must be off. Computer, one to beam up.