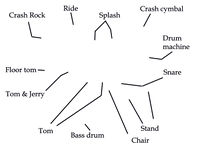 A conventional Air Drum set with the parts.

“Finally I found a drum set that suits my playing.”

“Before I use this Air Drum, no one can see me on stage, but now, I am too hot for them!”

Air Drum basically provides the same joy to the drummer just like the normal drum sets. While there is no significant different to basic drum sets, Air Drums are made up of air, which can improve one's creativity and virtuosity. The most notable group of people who always play Air Drum is the virtuoso group, which usually consists of drummer wannabe. Besides the unique style, the cost of buying Air Drums is pretty low.

Drum-arms, dated back in the Golden Age.

The first Air Drum originally came all the way from Zimbabwe, during the Golden Age period. The concept was to improve the happiness of the citizens, because apes ruled the country at that time. King Halualua, the King of Zimbabwe, ordered his vice-king to provide Air Drums to every single tree. One notable invention was the Arm-stick, which is a couple of sticks used to play the Air Drum.

During the Silver Age, Air Drums were banned from most communities because it's addictive level that made students skip clasess and chickens stop giving eggs. The instrument also divided the world into two groups; group of people who use the Arm-stick and group of people who use the Air-stick. Quite different with Arm-stick, Air-stick can give more freedom to the drummer and some people even said it is more progressive.

Although playing Air Drum seems easy, you really need to learn at least one technique, so people know you are playing an Air Drum set. It also hurts like hell if you smack your face with your air drum sticks, so don't try and look good. Here are some important techniques to be considered:

Bush with the Baroque face technique.

This techniqe really represents the player's mood and passion, and brings the feeling of the music. On the right side, we can see Sir Bush playing Rock Concerto Suit 1.5 in Flat C Minor Sustain DevC with his Air Drum Classic with the Baroque face technique. Notice the shape of his lips, which is very good. People need to have this certain shape of lips to tell the audience how they feel about the world, and how they feel about the audience, and at some point, how they feel about themself. This technique was invented by the apes in Zimbabwe, if you look back at the History section of Air Drum. Until now, however, Sir Bush is the only one who can beat them in terms of this technique, although Dick Cheney comes really close in the third place. 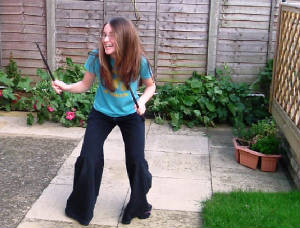 , where v is the speed, d is the distance of your arms to the Air Drum, P is the air pressure and h is the height from the sea level. Try to apply the speed based on this calculation, to ensure your own safety, and of course the audience's safety as well as your own. The error of this calculation is around +/- 0.5.

A complete set of Air Drum with triple bass drum and Chinese cymbal. Also notice the gong at the back.

Ever heard "Music is some imaginations in tunes"? Yes, it applies here, when you want to buy Air Drum, you only need some imaginations and talent. There are a lot of people out there who own Air Drums, but they just simply don't have the talent. Vice versa, many musicians have the talent, but they don't have the imagination. These two aspects are called the "Imagination Talent Continuum". Nonetheless, other continuums also have to be considered, such as skills, talent, willingness and perseverance. A number of musicians recently have given up their Air Drum careers because they don't have the willingness to adapt the style of Air Drum, which is important in the development of the design.

Bear in mind that you can always return your Air Drum if you don't like it. However do not, I repeat, DO NOT, do not throw them away too often, as the surrounding air will become polluted. Probably 5-10 changes is enough in your whole life. 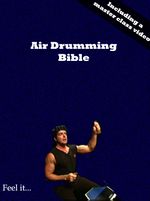 Learning how to play Air Drum can be very hard for beginners, because of the progressiveness of the instrument. Also, sometimes experts find it very hard to improve their skills, as well as teaching their students. The Air Drumming Bible, which was releasead in 1987 under the governance of Mister Adolf, provides all-in-one guides to master this unique instrument. Even the book is the hard cover version! The Bible also provides a masterclass video to give one-to-one tutorial.

Anyway, the writer of the bible once said, SHIT-O-GOOD during his performances, and apparently, no one has been able to figure out the meaning. However, because he is a nice guy, he explained that SHIT-O-GOOD is an abbreviation of Shit! Hopefully I'll Turn Out Good. This is an absolutely meaningless quote, yet, very useful. The main point of this quote is that, "Keep trying and don't give up". Some people also believe that "Keep imagining and don't give up" is the true meaning of his words.