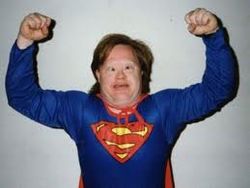 The Creator of such Awesome and beautiful work.

fat Admirers are people subhuman faglords who have a fat fetish for fat woman. Not only fat woman, but women that are so obese that they are Literally disgusting blobs of lard Despite it might not seem likely that these people exist en masse, They do. And the most disgusting thing about these subhuman creatures, is that they are in virtually every single fandom, which means a volley of obscene eye rape is unavoidable. thou hath been warned. 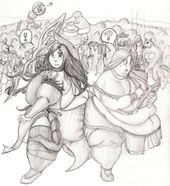 Typical stuff that fat admirers shit out from their hands. note the crude sense of humor that the subhuman gay tries to implement in order to cover his disgusting faggotry.

these inhuman monsters tend to exist in sites such as deviantART, Furaffinity, and fanfiction.net, drawing (or in case of fanfiction.net, write) inflation/exspansion "art" which contains females getting fed or pumped with stuff, usually air or lard. Usually the subject is an anime girl or a furry, since most fandoms fall into either anime or furfag. This usually makes them Furfags or weeaboos. They also tend to implement crude, corny and unfunny sense of humor in order to cover their disgustingness. In reality they are most likely 40 year old basement dwellers and are gheymers and self-proclaimed anatomy masters.

Despite it seems like these subhuman gays should be despised and loathed in the eyes of normal people, They somehow managed to get a bunch of hive-minded individuals to praise and kiss their ass and are (surprisingly) popular in spite of not having any actual talent whatsoever. The reason behind their rabid popularity is highly spetaculated by scientists, but is mostly regarded as sockpuppets of the fat admirers themselves or here are simply an insanely massive number of such inhuman faglords existing between you and me. The latter is generally the more reasonable anwser as it gives excuse for us to exterminate the lardfags with justice in mind. 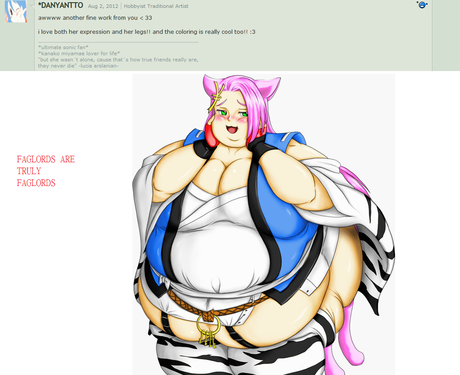 Typical like minded individual giving complimentary comment. The test subject below is used to show how talentless this fag is.

But, WHY That so many faggots indulge in such raw, uncondensed faggotry? There is no correct answer. However it is spectaculated that this is not a matter of a personal fetish, considering that the actual fat fetishists are a minority. The widely spectaculated actual reason is the fact that fat furs don't have a life, they have no hope of getting laid, so they draw woman or furries (the latter is yet another sign of dying alone) getting stuffed into a pile of lard in hope of reliving themselves from their lifeless situation.Another reason is they tend to have autism and ADHD, which also means they are truly lifeless and will stink forever.

the Aspiring Artwork of a gay fat admirer

Believe it or not, There are actually fat admirers who draw men (or male furries) getting turned into lard. Most of these talentless subhuman gays tend to be furries; This fact alone makes them even more disgusting than your typical fat admirer. This does not appear to be a personal fetish or any form of self-indulgence; it's simply drawn for the sole purpose of making the furry fandom even shittier than it was. These people deserve to be rot in hell and all of them deserve every last bit thrown against them. Note that unlike the typical fat furries, these people are 0% brony and 100% pure furfag since there are no male ponies who can appear for long.

One of the most subhuman of all lardfags on deviantART. notice the massive amount of watchers and friends which real artists don't have.