UnNews:Pincer attack of Arctic and Antarctic air leaves island paradise out in the cold 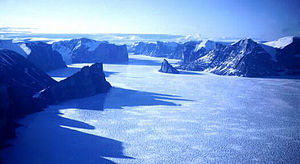 Glace Bay, Nova Scotia (CP) - Cape Breton has been hit by an ambush of both Arctic and Antarctic air. The hot Cape Breton summer came to an abrupt end on Friday when temperatures plummeted to 18K (- 251°C). The lowest being 4.3K (-269°C) on August 28th. It has set a new record for the coldest temperature recorded on Earth.

A state of emergency has been declared but mayor John Morgan is urging his citizens to stay in their homes and remain calm until the cold front passes. James, a 22 year old Reserve Mines man who asked us to use only his first name, says he hopes the cold weather clears up soon. "I want to get back to the beach and check out all the skin, I can't do it sitting here in this shithole". James also went on to explain that he had to burn his entire pornography collection for heat after he ran out of other household items.

Food shortages have also been rampant in Cape Breton because nobody can get to the Food Bank to get their monthly rations. James explained that after he ran out of food, he had to kill, cook, and consume the other people living in the home. "At first I was appalled by what I had done but eventually I started becoming more accustomed to the taste, and to be quite honest people do taste pretty good, its going to be hard giving up cannibalism".

This isn't the first time that Cape Breton has experienced extreme weather. In August 2001, the area was hit by a record heat wave and temperatures rose to 308°C. In November 2000, Glace Bay was hit by 100 feet of rain. The band Guns 'N Roses made a famous song about it. A category 5 hurricane named Hortense hit in September 1996 and a 9.0 earthquake hit in November 1929. Mayor Morgan believes that Cape Breton will recover from this disaster.