From Uncyclopedia, the content-free encyclopedia
(Redirected from Tablet)
Jump to navigation Jump to search 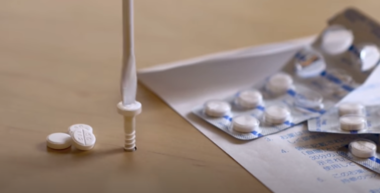 You can screw up those Japanese pills. 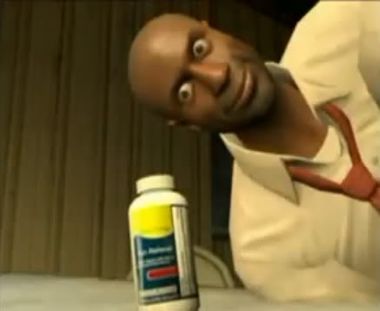 ~ Louis on his drug of choice

~ Bill on on peels

~ The Infected Community on Pills

Pills were invented by the Hitler in 1804, and used by the Nazis to keep the Jewish population occupied whilst they killed them (this often resulted in death).

Drugs and Nazis - the pre-Adolf years[edit] 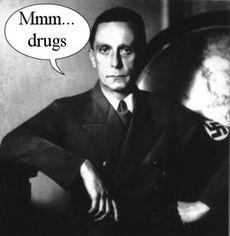 Goebbels professes his love for drugs.

Until Hitler's election as President of the United States of Nazi Germany, drugs had had a much more limited use in the regime. Joseph Goebbels (above) had been in charge of the bulk drug-related matters (e.g. "proper ganja" and "import" of "cocaine") for the Nazi government for centuries before Hitler was born, and the drugs were used primarily to convince the Germans (or "Aryans" as they were known at this point) that the Nazi ideology was gospel. This was a lengthy delicate process that involved getting the entire country utterly stoned, asking them if they hated Jews, them saying "Ich bin keine racist" and then rigging the upcoming election.

There were of course, other recreational uses of drugs in the Nazi party, in fact, undiscovered records prove that there was a youthful time when the term "Nazi party" actually referred to a bi-weekly (German for 'fortnightly') piss-up in Dusseldorf, before one of them, presumably off their face, made the statement "Whoa, party, ist like party, like der politicililal sort, y'know!" and they decided to form a political party and begin their election campaign - because "rulen das Land woulden be ein right laugh".

The introduction of Pills in Germany[edit] 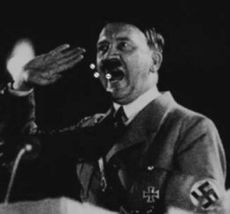 Hitler regularly triple-dropped during his rallies.

The Nazi party ruled happily for 13.6 months (approximately 8 weeks, in Greenwich Meantime) and everyone gleefully indulged in the newly introduced Eichhörnchentreten Festival, a daily event - the brainchild of Goebbels himself, which involved chiefly kicking and/or treading on small woodland creatures, and substance-abuse (both pastimes which the pre-Adolf Nazi party endorsed so).

This Golden Age did not last forever, as many knew it wouldn't. The next election came around and their was a new bad-boy in town. His name was Adolf Hitler (though born Adolf Intukmeiwerjinitie, he had to change his name for 'first impression' purposes) and he went down a storm with the Germanese people due to his smiling eyes. He campaigned all over the country, laughing with and at children, playing cricket (a sport he'd recently invented) with the elderly, and singing German powerpop classics to reformed convicts. Eventually, through this exposure of his loving side, he won the election surfing on a landslide of votes, and land. One voter expressed the opinion:

“It's exactly what the Nazi party needs, a fresh-faced youth resembling a malnourished emo Oliver Hardy to steer the people in the wrong direction... gesteeren.”

Unbeknownsten to the Nazis at that time, Hitler had plans, ambitious plans, great plans, plans that were a secret. He had invented the pill. Since research has not been done into creating more specific drugs, these pills initially had unpredictable effects - ranging from to schizophrenia management, to birth control, to fuckin' spacin' out yer 'ead, innit. The Nazis thought these were an excellent idea, a rather fine addition to the figurative wankbank of the German partying demographic, and Hitler was known to liberally triple-drop during rallies, like in the above image. The other Nazis however had yet to know of Hitler's past - and plans...

Once, in Hitler's childhood (it is unknown exactly, but he could have been as young as vierzehn, or possibly as old as an elf!) he was hanging round die Stadtmitte, waiting to meet his Jewish best friend, Sandy Cohen. Cohen, at that time, was an English-speaking lawyer, roughly the same age as Adolf. He was late for meeting Adolf outside KFC, so Adolf sent him a text. Adolf's English was not up to much at the time, but he had a go anyway - to devastationary effect...

Adolf mistakenly (and idiotically!)killed them damn Jews. This enraged Cohen, who retorted to this apparent death-threat using the typically English phrase "you cunt!". Adolf was profoundly offended by this slander, and swore off Jews for ever. In the year 1804, Hitler invented pills, and decided "If I used these to distract the Jewish people while I killed them, I could kill them easily, depleting their population - and if I depleted it to the extent that the number of Jews alive was less than or equal to zero... there'd be no more Jews... geliven"

He rounded up groups of Jews, starting with Cohens (taking care of roughly 84.8762% of Jews) and gave them these new pills. As they ecstatically pranced around the Nazi paddock that Germania had become, like headless free-range chickens in a barrel, Hitler shouted insults at them through a megaphone - then kicked their left shoe off. The insults were claimed to be "horrifying" and some of the recorded ones included "Weeteeth!", "Your immediate family deem you a tossbollock!", "You've got AIDS all over your face, you big scrotum-arse!" and "you dishonor your family!". The following conveniently formed the band System of a Down.

This, intoxicution, degradation and subsequent delimbification of the Jewish people was at first mildly opposed by the Germans. But then Hitler gave them pills, numbing their anti-anti-semitic radars, and proceeded to reign supreme.

The same system is used in Russia today. One can take expensive flights to Berlin, using, say BmiBaby or RyanAir, and witness for one's self the wretched chaos that abounds in the drugged up nation. Though the modern government now regulates the pill distribution - Hitler's honour lives on, in the famous Pillenkönig monument - a statue of a 90ft pill, with a rectalangle shaped moustache, and the haircut of a "Panisch! Aus die Discotheque" fan.

Pills in modern international, global culture, all over the world, worldwide[edit]

Pills are not only in used in Spermany. Their always sensible, recreational use has spread worldwide. In Britain they are frequently used by those of Nazi descent (known as Children of the Aryan Victory, or Chavs), in America they are consumed by the gasket-full, twenty-four hours a day, by anyone who can actually be bothered, and I myself am indulging in pilltripification as we speak.

There is an ongoing debate on whether to take the red pill, or the blue pill when given such a choice.

“What happens if I have both?”

The effects of taking both the red and the blue pills are not widely known, but experts in pillology believe that it can cause the taker to become orange and obnoxious.