From Uncyclopedia, the content-free encyclopedia
(Redirected from SATAN)
Jump to navigation Jump to search

The Prince of Darkness is well known as a popular villain from early comic books, including The Bible, written by God and illustrated by Moses. He is also featured in the cult classic The Temping of Christ, an ancient black and white silent film created in Transalvannia by an unmentioned artist. While many of the roles forced upon him by contemporary literature are without his consent or knowledge, he does not deny that they happened. In fact, he has let slip on more than one occasion how satisfying it was to tempt "that little long-haired bastard".

The Prince of Darkness has always been a big hit at parties.

Lucifer "Satan" Beelzebub was born a poor black boy around 1958. 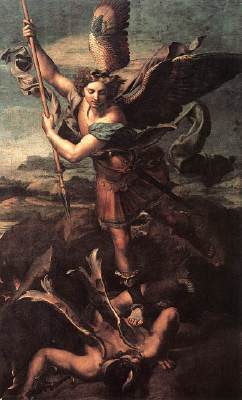 An older rendering of Satan being smited by Michael. Despite appearences, Satan won far more often than he lost.

Very few know the exact moment of his birth, which greatly contrasts with knowledge of the moment of his conception. Many scholars believe that, as he once suggested in his memoirs (now lost to the sands of time) he was named after the place of his conception, the small town of Satan, England. This particular passage is mentioned extensively because it rates so highly on Satan's "yuck factor" (a solid 9.6/10). He had the misfortune of being told the story of his naming at the age of fifteen thousand years old by his father God and his mother Godette.

Like any poor young man, Satan was raised by dogs and sheep just outside of Stratford [[1]]. Having no education to speak of and needing even less (he was told the secrets of the Universe by God the night of his birth, and has not spoken of them since except in riddles), he frequently taunted the young boys learning in New King School. There he met a young man with an obsession of the English language and a lisp. Satan gathered his first soul here, offering to trade young playwright's soul for a decent jaw.

After living on this planet for over a thousand years, Satan got bored of being a human and subsuquently spent the next two months trying to stop being a tree. However, the minds of trees are teribbly unreliable and by the time Satan again regained human form he was a large, volumptous woman with AIDS. Refusing to abide by this, he researched and developed a decisive cure for cancer, which he keeps in his wallet. Asking to borrow this cure will result in immediate combustion for the foolish asker. (Note: Satan now keeps a jar on his mantlepiece in the eternal torment of hell with all askers inside. I know. I've been there.)

Later, he turned himself back into a black man and has been happily masculine ever since. Although recently, he's been persecuted by the KKK.

Television and the media[edit] 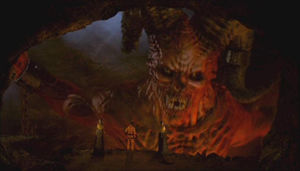 Satan is currnetly the lead guitarist for Guns N Roses and with Axl Rose, plans to Release Chinese Democracy sometime in the year 2203830. He hopes to outlive Buckethead in the race for ruler of the galaxy. The current ruler is Kurt Cobain.

He went on to conquer many other notorious souls, until George W. Bush became president of America. By this point in time souls were so easy to trade that Satan finally cashed his in and retired to the Bahamas. He runs a small electrician's business near the coast under one of his many aliases, where he has reported he will happily spend the rest of his days.

Fear their wrath, and beware their confusing names.
Satan's Many Guises:

Why?:Join a Satanic cult
If you are confused about which one you want, it's probably Original Satan.
Retrieved from "http://en.uncyclopedia.co/w/index.php?title=Prince_of_Darkness&oldid=6010005"
Category: